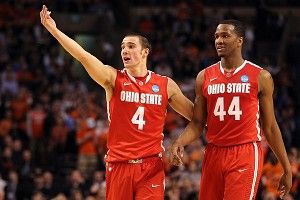 Do you think Anthony Davis doesn’t shave his unibrow because he is hoping it becomes his signature look, similar to Michael Strahan’s trademark gap?

At this point, I don’t think there’s any doubt that that’s his plan. It’s just not clear whether that was his plan all along. Maybe when the unibrow started to form, he didn’t realize he was supposed to shave it, and all of his friends and family were too scared to tell him it looked hideous because they didn’t want to sour their relationship with their cash cow. Then once he realized it was ugly, he decided to just leave it because he saw how much the Kentucky fans love it.

Either way, he has no choice but to embrace it and keep it for the rest of his career, because it has surpassed Joakim Noah’s pube ponytail, Shane Battier’s wrinkled head, Larry Johnson and Stephon Marbury’s middle part, Adam Morrison’s dirty mop head and trash ‘stache, Casey Jacobsen’s frosted tips, Luke Schenscher’s ginger curls, and Eugene Edgerson’s lamb chop sideburns and Afro as the most iconic hair in college basketball in the past 25 years. If Davis got rid of it now, it would be like Ric Flair shaving his head in the mid-80s.

Speaking of shaved heads, what if Michael Jordan would’ve had the same attitude as Davis and embraced his baldness instead of shaving his head? Can you imagine how different the perception would be toward male-pattern baldness if the most iconic athlete in history had hair all around his head but none on top? He had the power to take something that is embarrassing for millions of men and make it the single coolest hairstyle in the world, but he selfishly chose to take a razor to his dome.

Although, the one silver lining in this is that had Jordan left his horseshoe hair pattern, the George Costanza we all know and love never could have existed.

This Final Four is clearly a representation of Rocky IV, and Kentucky is the seemingly unbeatable Ivan Drago. So, which of the other three teams is the piece of iron that can hang with Kentucky and emerge victorious? Which team is Rocky?

Even though it will be dismissed as a biased pick, I really do think Ohio State has the best chance of knocking off the Kentivan Dragocats, simply because they have more talent across the board than Kansas or Louisville and have looked better throughout the tournament than either of those two. Of course, this isn’t to say that the Cardinals or Jayhawks can’t beat Kentucky, because I truly do believe any of the remaining teams has what it takes to pull off the upset.

I obviously think Kentucky should be the overwhelming favorite heading into Saturday, and I don’t expect the Wildcats to lose, but the tired cliché of “defense wins championships” will be the theme of this Final Four, and Louisville, Kansas, and Ohio State all play excellent D. As smothering as UK’s defense has looked at times this year, it’s nowhere near as good without Anthony Davis on the floor. So if one of those three teams can get Davis in foul trouble and win the defensive battle with him on the bench, an upset over Kentucky isn’t out of the realm of possibility.

You get to pick eight players from the Final Four, exactly two from each team, and one of the coaches. Your team and coach get to practice together for a week. Then they play a high-pressure, 40-minute game against the best remaining players and coach that you didn’t pick in front of a split crowd of 20,000 crazy fans. Which players/coach do you pick? Who’s your starting five? What’s the spread in the game?

I’m interested to hear what you think the best team would be, not necessarily who the two best individual players are on each team.

I love hypotheticals, which is why I spent more than a half hour trying to figure this out. Here’s the lineup I settled on:

Davis, Robinson, Kidd-Gilchrist, Sullinger, and Taylor were all no-brainers for me; four of those guys are lottery picks and Taylor is by far Kansas’s second-best player. From there, I used my second Ohio State pick on Craft because of his defense, and since he’s not interested in scoring, he’s one less ego to have to deal with. I went with Self as the coach because Thad Matta and John Calipari have yet to win a national title, and I wouldn’t want my team running Rick Pitino’s press (not to mention the fact that my two Kansas guys are starting and my two Louisville guys are coming off the bench). I decided to give Robinson the starting nod over Sullinger because he’s had the better season, but most importantly, because all of you would’ve ripped my head off for being a homer if I had started Sullinger. And since the best shooter in my starting five is 0-for-17 from behind the arc in the tournament, I used my two Louisville picks on the Cardinals’ two best shooters.

With those guys off the board, I’m guessing the other team would look something like this:

Based on that, you have to figure that since my team has an undisputed advantage at every position except for maybe point guard, and I have the considerably better bench, we would have to be at least 10-point favorites, right?

I enjoyed your response to the d-bag who was planning on rooting for UNC over his alma mater of Ohio U. last week. I find it ridiculous to root for a team you chose as an annoying adolescent front-runner over a team connected to the four to eight best years of your life.

That said, I now have a similar problem. I’m a lifelong Ohio State fan and hold a degree from said institution. I’ve always rooted against Kansas since my college roommate was that prototypical front-runner for the Jayhawks who has never even set foot in any of the states adjacent to Kansas. But now I am sitting atop the standings in an NCAA bracket pool that will pay me $2,500 if the Jayhawks win the title and nothing if they don’t. I plan to root for the Buckeyes on Saturday, but part of me will be just fine with the outcome if they lose. I keep vacillating between feelings of guilt and visions of popping bottles in the champagne room.

Am I on the verge of selling my soul? Would I be forgiven?

While most people rarely get the chance to win $2,500, I’m guessing that this is a common problem on a smaller scale for a lot of people who play fantasy football or fill out brackets. It’s thankfully never happened to me, so I could be way off-base here, but with that kind of money on the line in this economy, I think you’ve got an acceptable excuse to not flip cars and set couches on fire if Ohio State loses Saturday. Although, an Ohio State loss doesn’t guarantee you any money since Kansas would still have to win one more game, so I’m thinking the best way to handle this is to mourn the Buckeyes’ loss (assuming it happens) like you normally would, and put off the celebration until Kansas wins Monday night.

The last thing you want to do is be anything but miserable if Ohio State loses because it’s a surefire way to jinx Kansas in the title game, and you’ll never be able to live with yourself if you partially celebrated an Ohio State loss that ultimately won you nothing.

How would you feel if Ohio State ends up winning the championship? Obviously as a former player it would be nice to see them win, but would there be any jealousy?

Of course there would be jealousy, especially since I have no doubt in my mind that if the 2007 Final Four team from my freshman year played against this year’s Ohio State team, the 2007 team would win by 15. It would be a hard pill to swallow to know that our team in 2007 didn’t win a title but this year’s team did, even though we were clearly the better team. Having said that, I’m obviously going to cheer like crazy for the Buckeyes this weekend, and by Tuesday morning, I’ll likely be dead either because I went overboard celebrating a national title, I drowned myself in whiskey while coping with a loss, or I finally sacked up and ate an entire $10 box from Pizza Hut.

But the real reason why I’ll be cheering for Ohio State to cut down the nets is because if they do, I’ll have definitive proof that I’m a secret weapon to win a championship. That’s because it would mark the second straight time that my former team won a title two years after I left. When I was in high school in Indiana, my team never got past the first couple rounds of the state tournament. But two years after I left Brownsburg High, Gordon Hayward led my alma mater to a state championship. And now, two years after I graduated from Ohio State, the Buckeyes have a shot to win a national championship. So if any of you NBA GMs reading this want to win an NBA title, all you have to do is sign me to a four-year contract, cut me loose when the contract runs out, and then spend the next two years getting your champagne ready.

As a Kentucky fan, when Anthony Davis went down against Baylor I nearly pooed myself. Could you imagine a worse scenario for a title contender than Davis tearing an ACL?

I can’t tell if you’re actually from Cincinnati or you just said that you were as a subtle joke, because yes, I can definitely think of a worse scenario for a title contender.