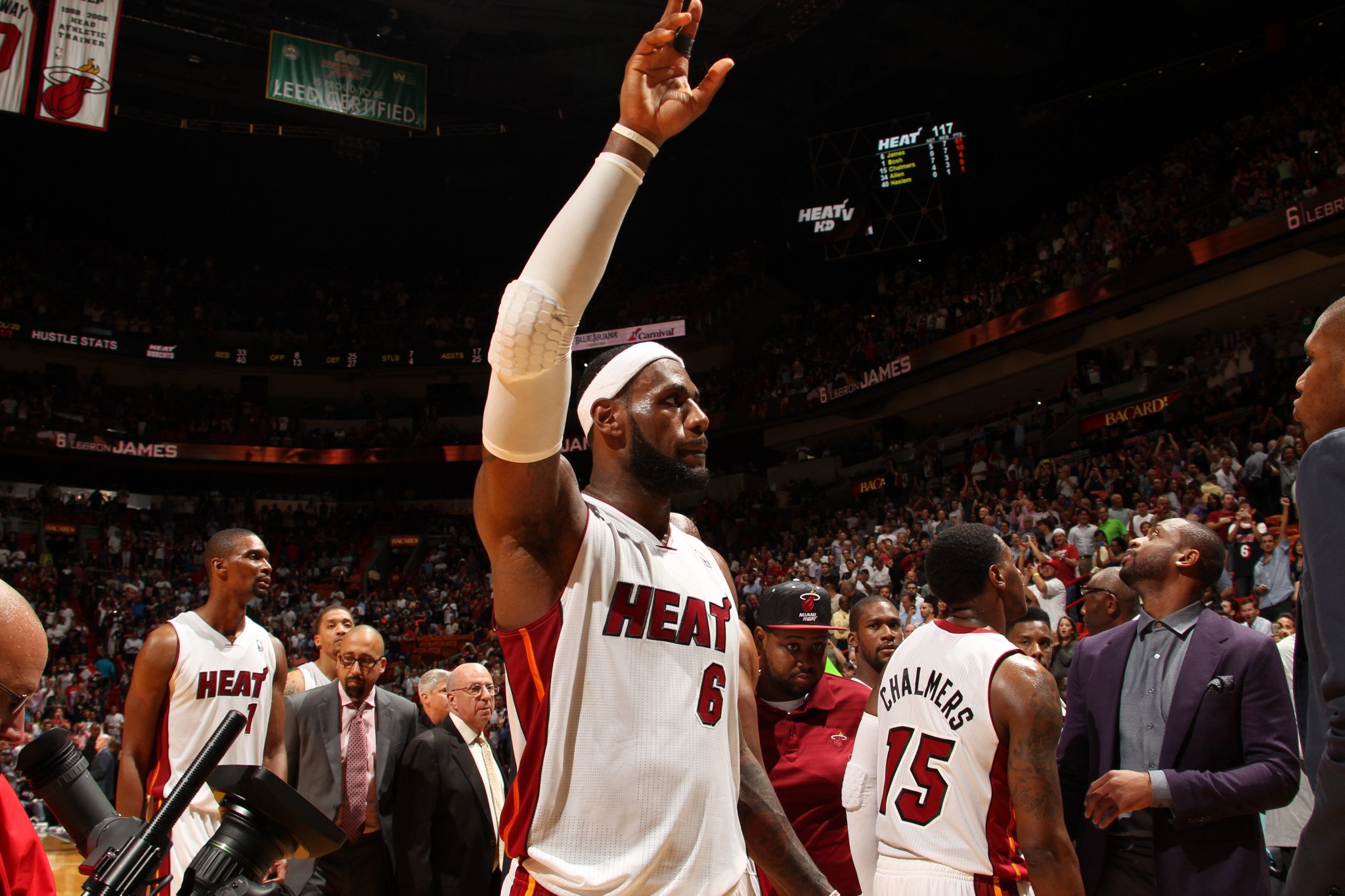 Chris Ryan: Sharp, we finally got the answer to the question we’ve been asking all season: When was LeBron finally going to sack up and surpass Glen Rice?

Billy Owens with his alert quick hands! Cue the violins. Seriously, though, last night LeBron James set the Miami Heat franchise record for points in a game, scoring 61. He went 22-33 from the field and 8-10 from behind the arc. There’s finding another gear, and then there’s finding your inner Shiva, god of death. What just happened? Are we alive?

When LeBron is hitting his jump shots, he becomes the most unfair player on the planet. We know this. What’s frustrating is that sometimes he’ll hit his jump shots and take only like 16. He can still score 25 a game that way — and average something like 10 boards and six assists, and dominate on defense — and get his teammates involved, and it all makes him the best player in the league. But it’s not as fun. There are so many times you watch LeBron and it looks like he can do whatever he wants on the floor, only it almost never translates as scorched-earth scoring.

Usually LeBron is playing and everything’s so precise and effortless, it looks like there’s classical music playing in his head. Like this:

Last night it was like this playing in his head:

That’s what we dream about with LeBron. Last night LeBron was the huntin’ motherf---er and the Bobcats were the duck. Are you ready for the next six weeks of a KD-Bron war?

Ryan: Oh you want to invoke some IDM!? LET’S INVOKE SOME IDM.

Truth be told, that’s what is playing in Michael Beasley’s head whenever he’s just home watching Hannibal and thinking about the river of time that flows through us all. You mention that LeBron was an unlicensed Bobcat hunter last night. Or a duck hunter. Whatever: He really zeroed in on Michael Kidd-Gilchrist.

MKG was a Triangle All-Star and, in my mind, I always had him marked as an excellent defender. I don’t know if he owed LeBron money, or made an appearance on a Da Real Lambo mixtape or something, but for some reason LeBron took this out on him. It almost felt like the Michael Jordan–LaBradford Smith game.

Short version: LaBradford Smith had the game of his life against Jordan, scored 37, and was rumored to have sarcastically said, “Nice game” to Mike. Of course, Jordan being Jordan, being Keyser Söze, the following night when he played Smith, he scored 36 in the first half, and finished with 47. MKG has never scored 37 on anyone, much less LeBron. But this LeBron performance definitely felt like revenge to me. Was Bron just subbing MKG in for Durant? Either way, I love this shit. There’s nothing better than when an athlete takes a game way too seriously. This was always the knock on LeBron, right? That he was missing the psycho-killer gene that made guys like Bird, Jordan, and Isiah great.

Sharp: First of all, moment of silence for Michael Kidd-Gilchrist.

But yeah, that’s what I loved about watching LeBron last night. There was no mercy, even after he torched the Bobcats in the third quarter and pretty much ended the game 12 minutes early. Even in the fourth, he wanted the ball. He wanted 50, and then he wanted 60. There have been other ridiculous games from all kinds of players over the years (Tony Delk!), but what was fun about last night is how out of character it was for LeBron. In the fourth, the guy who’s spent his entire career playing within the flow of the offense was calling for it out by the 3-point line, and then just going to work on his own.

I have no idea how much the MVP stuff plays into this. Maybe he got hot early, and just decided to ride it out in the second half. Maybe that was the only way to spice up an early-March game against the Bobcats.

But it feels a little bigger than that. When Durant went on his run earlier this year, LeBron was joking when he talked about the “KD watch” on his phone, but he still recited the KD stats verbatim.

Since then, he averaged 31, 8, and 7 in February, including one game full of ruthless bloodshed in OKC, and 61 points last night. There was also 36 and 13 (and a game winner) against the Warriors, 37 on the Suns, and 42, 9, and 6 on the Mavs. What I’m saying is … six weeks after LeBron getting asked about KD’s stats in that locker room, we’re all reciting Bron’s stats verbatim. I don’t think this is an accident.

It gets to the bigger issue here, and the best part of any great rivalry. If you look at how much better Durant’s gotten every year, and how much better LeBron’s gotten as this year’s unfolded, you can see them making each other better. At this point, I don’t even care who wins MVP. I just want this to go on as long as possible.

Ryan: Yeah, it’s hard to say how much the MVP thing matters. But what I do think matters is “the conversation,” for lack of a better phrase. It moved away from LeBron for the first half of the season. Durant was becoming the sun, and the league revolved around him. When we talked about LeBron, we talked about him losing a step, his stats dipping, him going to the Clippers, etc. This is a guy who obviously cares very much about his place in the league, both in the present, and historically. Nobody talks about Mount Rushmore unless they like to visit national parks, you know?

Remember Goldsberry’s piece? This is a guy who sees all the moves, and I think that extends off the court. In the same way LeBron became a villain by moving to Miami and then regained his hero status — not only by winning rings, but by riding his bike with kids and generally being a really likable, kind dude — in the last couple of seasons, I feel like he ceded a little bit of the spotlight to Durant, only to snatch it back.

Seeing what he’s doing now changes how I view this entire season for him. Like, even something as innocuous as him dunking off the wall during a practice in February …

… you have to view that in a different way now. He put that out right before the dunk contest, just to say, “I AM THE DUNK CONTEST.” The break’s over, man. I can’t wait to see KD tonight against the Sixers. You think Durant’s going to respond?

Sharp: We’ll see. Westbrook’s return means we don’t get as much of KD going nuclear. Also, the Sixers could be down 30 at halftime, which would make it tough for Scott Brooks to leave KD in the game without looking like a total asshole. Having said that, I would have thought the exact same thing about LeBron and the Bobcats last night.

So … KD’s dropping 70 on Hollis Thompson and Byron Mullens?

I’m in. For tonight, and for the next six weeks of this cold war where the two best players in basketball one-up each other every few days. Let’s go watch amazing happen.

Dustin Penner, who once injured himself eating pancakes, has been traded on National Pancake Day.