Tuesday Night Lights: The Coronation of the Kings 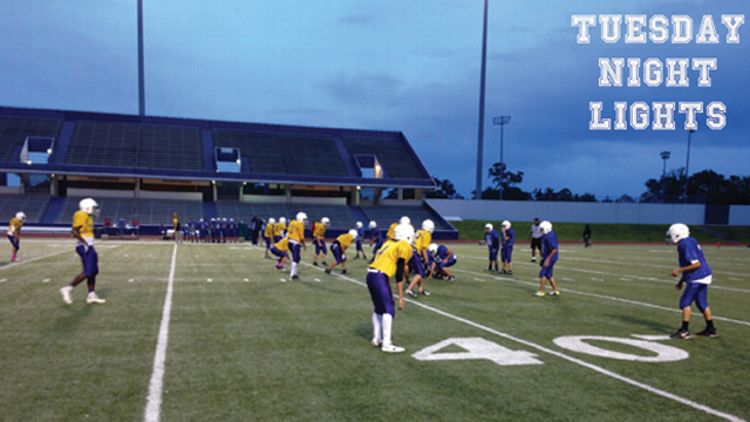 We played School D. this week. It was the final game of the season. Their team was the only thing that remained between our team and a perfect record. It was an unenviable place to be, for sure. I can’t imagine that standing between a mama bear and her cubs is any less treacherous. Some notes:

1. It took us approximately 10 seconds to score the game’s first touchdown. School D. kicked the ball off, The Helicopter caught it, turned on the big engines — which is something he only does when he wants to prove a point — and that was that.

2. All 20 players on our sideline found themselves in the game before the midway point of the second quarter, which is just a different way of saying we’d scored more points by than we were going to need by then.

3. Three touchdowns were called back in the first half because of penalties against us. We didn’t need them, though. We could have given them to School D. and still won comfortably. By the third quarter, we were actively calling plays in an attempt to avoid scoring touchdowns (lots of dive runs and whatnot). The boys still accidentally scored twice in the second half.

4. The T, our outside linebacker/running back, played like an insane man. School D. tried to throw the ball toward his side of the field exactly one time. The quarterback thought he’d lobbed it clean over The T’s head. Everyone on our sideline knew otherwise. The T sprang up into the atmosphere, clawed the ball into his chest, then accelerated toward the opposite end zone at an incalculable speed. Nobody came within 30 yards of catching him.

The Game, As Expressed Through Two Anecdotes, Both Which Involve This Opposing School’s Coach

Anecdote 1: Near the end of the game, The Helicopter found himself in the company of School D.’s coach. “Cam! Hey, Cam Newton!” the coach shouted at him. “Let me ask you something,” he continued. “I know where you probably wanna go: [School L., a high-end football mega-school in the city]. But where are you zoned?” (“Zoned” is the term used to describe the school a student will attend based on where he or she lives, which is what happens if that student isn’t accepted into a magnet school.) “I’m zoned to [School E.].” The Helicopter responded. School D.’s coach smiled widely and gave him a big hug. “That’s where I went, boy! You gotta go there! We need you there. I’m gonna call the coach tonight and tell him you’re on your way.” The Helicopter is a football megalodon. In every other context, though, he is a shy 13-year-old. He looked down, smiled, and chuckled. His braces peeked out of his mouth. “OK, sir,” he replied. It was the third or fourth time that sort of conversation has happened.

That’s how the game went.

Anecdote 2: Right at the beginning of the fourth quarter, our team, ahead in the game by an impossible margin, kicked the ball off. A player on the back line of School D.’s kick return team scooped it off the turf and began running toward the tangle of players he assessed to be the least venomous.

They all smashed together. Following the play, one of the players remained down on the turf. It was The Little Running Back, who played in four games this season and got hurt in three of them. School D.’s coaches, our head coach, the athletic trainer, and I all jogged out to check on him. He was awake and all his limbs were working, though he was in no real rush to use any of them. He’d knocked helmets with someone, he said, and his head hurt a little. The trainer ran through a series of questions to check his coherency. “What’s your name?” “Do you know where you are?” “Do you know what day it is?” He answered them all correctly, politely and with a very distinct, very discernible joy that he was still alive, which I’m assuming he’d initially gauged the other way. The last one she asked: “Do you know what schools are playing right now?” “Yes, ma’am,” he responded. “[Our school] versus [School D.].” School D.’s coach leaned forward. “No, son,” he said with a smile. “Just your school is playing. You guys got it. You won about two quarters ago.” He laughed. I laughed. Everyone laughed.

That’s how the game went.

All of them. Every single one. Football season is nine weeks long. To last for the entirety of it is no small feat. You must have an iron will and an iron nose and an iron everything. Between both the seventh- and eighth-grade team, we started out the session with more than 50 players. At our last game, we had less than 20. With the exception of a few — The Helicopter, who reigned as The Godking Football over our zone this year; The Big Gun, who I hear is being investigated for the disappearances of several opposing running backs; The T, who led the team in tackles despite missing an entire game and only playing half of the last one; and The Would-Be Star, who led our zone in receptions by a laughable margin — I suspect that many of our players will never play another game of organized football. I’m happy and proud that the memory of their final game will be one that ended with them eating a square of cake in the parking lot while celebrating their own greatness.

“Man, my butt hurts.” — One of our linemen, talking to no one in particular as he walked back toward the bench after getting knocked back on his tail on the previous play.

“He threw that flag down real aggressive.” — Dr. Boom, noticing the enthusiasm with which one of the referees called a block in the back against our team that negated a touchdown The Helicopter had just scored.

“Coach, ooooh, coach, who’s that? Coach, hook me up with her.” — The T, to me at the start of homeroom the day after the game, about a girl in my class. He’d just come from basketball practice. He smelled like a shoe. If I had told him that, I’m certain he’d have made some sort of joke about it at least being a designer shoe. There are no low moments around The T.

Important News for Next Week

Director Ronnie West attended our games last week and this week. He is making a “Tuesday Night Lights” video. I saw clips already, and it looks like it’s going to be wonderful. Somebody please call the people that vote on the Oscars and let them know what’s up. Thank you.

The Miami Dolphins and Everything That Will Never Make Sense