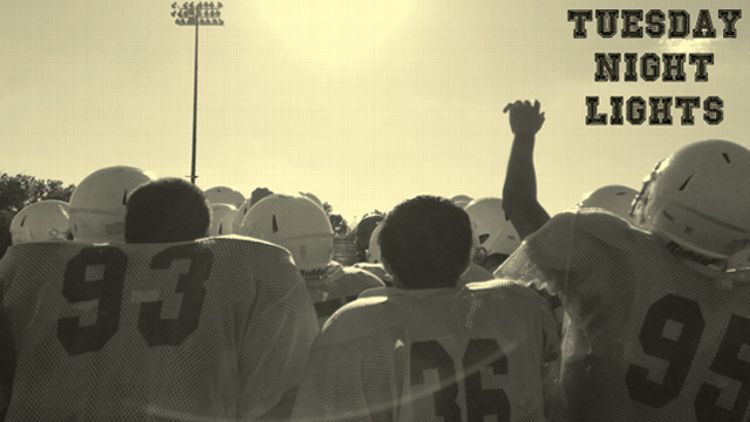 Our campus has a fairly tight dress code.

Each grade level has a designated shirt color they must wear, and that shirt must either be school-issued (with our school name and logo on it) or it must be a completely blank, properly sized tee in the appropriate color. Dockers-style pants have to be worn, and those Dockers-style pants can’t be too tight, or too loose, or too anything other than regular Dockers-style pants. A student’s general appearance can’t be too distracting — no facial piercings, designs carved into hair, visible tattoos (which is a thing, I assure you), or anything like that. It’s all perfectly reasonable. And everyone abides by the rules. But not the football players, at least not on game day.

On game days, football players are allowed to wear a button-up white shirt with a tie (or bow tie, if that player is especially stylish or silly). There are still rules. For example: The shirt must be tucked in. Their pants must be neat. And their shoes must either be dress shoes or all-black tennis shoes that approximate dress shoes when glanced at. But still. The players are always very proud to participate in this (the teachers do a good job of making a big deal of the situation — “Wow, Mr. Martinez, I had no idea you had a meeting with the president after school,” and things like that). And watching them all in the locker room before school starts, arguing about who looks the worst (generally whoever arrived looking the most normal) and who looks the best (the person who has the most accessories on is always assumed to be the best dressed), is always extra entertaining.

This being the first game of the season, the yearbook staff asked that the team gather in the gym prior to the beginning of first period so they could be photographed. The boys all arrived, then arranged themselves in proper order. The Would-Be Star went around fixing collars and telling people where to stand because that’s just the sort of thing The Would-Be Star does.

Most of the team wordlessly did exactly as instructed. The T, however, six miles of charming, made sure to find himself directly in the front, directly in the center of the group. When the photographer said to smile, he cocked his head slightly to the side, brought his hands up toward his lips, touched just his fingertips together, then pursed his mouth just slightly. He had the presence of Wesley Snipes on the front cover of the New Jack City DVD. It was remarkable. His aura made an audible humming noise (or he might have just been humming himself, I don’t know; The T is pretty goofy).

As soon as the picture was over he shouted, “Yeeeeaaaaah!” and then bounced away from the fray. When I asked him why he posed like that, he jingled a gold watch on his wrist at me and responded, “Coach, I gotta show ’em the Rolex.”

I knew right then we were going to win Tuesday’s game.

I had a pinch of nervousness on the second play of the game because one of their players, after having been knocked to the ground, did one of those things where you spring up off your back and land on your feet (HOLY CHRIST THEY HAVE KARATE MASTERS ON THEIR TEAM THIS YEAR is what I thought). But then on the very next play that same player was obliterated by our defensive end, giving up a sack that resulted in a 600-yard loss. I suppose that’s why Jean-Claude Van Damme never played a right tackle in any of his movies.

Our team moved the ball well on offense. Last year, we had three catches FOR THE ENTIRE SEASON. We matched that number against E. about 30 seconds into the game. Our defense was even more crucial. School E. earned one first down the whole game, and that was only because an eager lineman ran into their kicker during a punt. By halftime, we’d already stopped trying to score and began removing our best players, inserting seventh graders into the game (our seventh grade has its own team, but School E.’s seventh grade did not, so we allowed a few to play against the eighth).

We only threw the ball once in the second half, and that was an accident: We’d replaced The Helicopter, our eighth grade quarterback, with The Hulk, our seventh grade quarterback. He found himself in a fourth-and-15 after an unfortunate holding call, so, after receiving the ball, he scrambled for a bit before lobbing it up for grabs, 20 yards down the field. A seventh grade receiver found the football in his chest after it squirted through the hands of E.’s safety. He looked like he’d just been attacked by a shark. He stopped for a second to figure out what had just happened, heard the crowd erupt, then turned around and sprinted the remaining 30 yards for a touchdown. He jogged back to the sideline with a smile so broad I feared his teeth were going to fall out of his mouth. That’s the kind of day it was.

The Helicopter: He was just too devastating a force for E. If the corners or safeties weren’t paying attention, he’d fire lasers into the hands of his receivers. If the linebackers misread a play (which is basically ALWAYS in middle school), he’d unfold all of his legs, turn on the big engines, then burst into the secondary. He ran for two touchdowns, one of which was a 60-yard scramble, and could have run for 20 more if we’d asked him to.

The Hulk: Kids were openly avoiding contact with him for fear of losing a limb. The type of player he is: He stood on the sideline silent, waiting to play (kill?). When we called him and told him to go in at defensive end, a smile stretched across his face. It wasn’t a normal smile, though. It was a smile like a bad guy smiles in a movie right before he tosses someone off the roof of a building just to prove a point. The smile vanished, he sprinted out onto the field, got set, reacted to the snap, discarded the right tackle, grabbed hold of their running back, then slammed him to the floor with such velocity that the player exploded into just this red mist. #RIP

The Would-Be Star: He has already become our go-to receiver. His hands are like tiny black holes. If it goes anywhere near him, he sucks it in. It’s remarkable, really. And a relief. Last year the only way a receiver was catching a ball was if The Helicopter threw it so hard at his head that it got trapped in his facemask.

X: An unexpected bright spot. We threatened to remove him from defensive end after he went the entire first series without making even the slightest penetration. (I was surprised at his trepidation because he wears a bandanna with skulls or something on it under his helmet.) He responded the second series by getting a sack and helping to force a fumble. He ran to the sideline, collected his praise, then glowed.

The Big Gun: We handed the ball off to The Big Gun on our first offensive play of the game. We called a 32 Dive. We saw him charge into the thickets, then we saw bodies, then we saw the referees whistle for time, then we saw E.’s coaches walk out onto the field and remove a player who’d had the wind knocked from his lungs. The Big Gun is not afraid of contact. He’s also not afraid of the prison sentence that comes with attempted manslaughter, I guess.

The Little Running Back: He’s the star running back for the seventh grade team. He’s tiny, but he’s also an instinctual runner. He scans the field and computes angles and expected results and potentialities like a supercomputer. During a seventh vs. eighth grade scrimmage he made a positively devastating cutback in the secondary, skirting by both The Helicopter and The T (our safeties) and sprinting into the end zone. The coaching staff exploded with laughter. The Helicopter and The T looked at each other, shook their heads, then high-fived The Little Running Back as he jogged past them back to the huddle. We actually had to tell him not to score any touchdowns in the game, given that we were up 22-0 when he took over full-time running responsibilities. He looked like we’d told him he wasn’t allowed to breathe.

“Coach, coach! The clock! It’s running! Get the team back on the field!” —a seventh grader, during halftime

Next week we play School F., which won the title last year. School F. is always one of the two toughest games on our schedule (the other being School K., which alternates with School F. on championship parades). They are to us what the Hawks were to the Mighty Ducks. I can only hope that we play more like it’s the end of the movie and not the beginning. We will need to play a flawless game to beat them, and even that might not be enough.

34-Day NBA Warning: It's Time for OKC to Get Angry