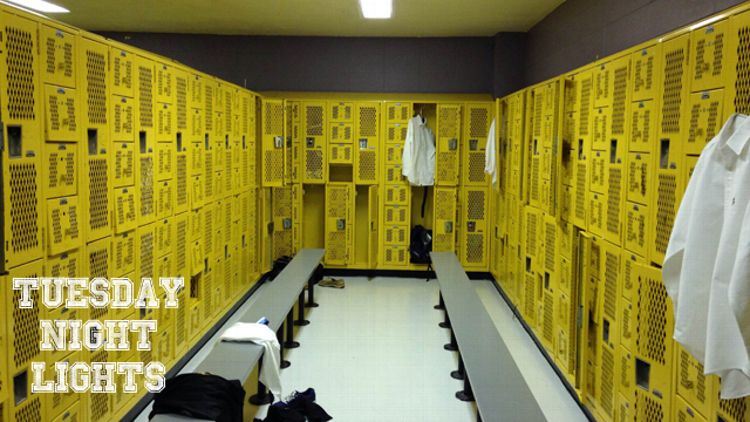 Yesterday, when the school day was over, I went home. After the bell rang, I stood around outside my classroom for a bit and then in front of the school for a bit more to make sure that none of the students fought each other. After they’d cleared out I gathered my things and just walked to my car and left. That was it. That was all. It was very sad.

For the past seven weeks, Tuesdays have been game days. Game days are so much fun. There is a palpable excitement. The first couple of Tuesdays after football season ends, which was last week for us, always feel so weird and empty and listless. We start basketball season soon, and that’ll help reproduce the energy, but for the moment we are simply at the end.

Coaching eats up an inordinate amount of your time. It can be a total chore. But when it’s over, after the helmets have been shipped back to the district and the lockers have been cleaned out, when there are no more opportunities to explain to a group of 13-year-olds how best to calculate and coordinate a blitz, it is nothing but sadness.

Because coaching is also the best.

In the days that followed the last game, I had informal conversations with a bunch of the players about a bunch of things, but I made sure to ask them all basically the same question:

Most of the answers were of the boilerplate variety, which I guess makes sense. Some of the best though:

The Goose: A first-year player who wiggled his way into the starting lineup early in the season through sheer force of will, his response came almost immediately. He looked at me, paused for a full two seconds, realized his answer, then let a broad smile stretch across his face. “The punt,” he said, all of his teeth peeking out. “I’ll always think about the time I caught that punt and just stood there.” I was certain he was going to say that. I’ll always remember it too.

The Center: He spent the entire season either tossing the ball toward the moon or toward the quarterback’s shoes: “I don’t know. Um … the last game, because I didn’t mess up that much.” Sweet kid.

The Backup Linebacker: He actually came out to play football last year but never got in any games because the seventh-grade team folded almost immediately after the season started. “My first tackle.” Why? “Because it was my first tackle.” Were you scared? Nervous? “Yes. Both.” What were you thinking right before it happened? “Nothing. I just closed my eyes and grabbed him.”

Smelson: Our outside linebacker. “All my sacks that I got, coach!” You got one sack this season, Smelson. “Well, I’m gonna remember that one. And that fumble that I forced!”

The Would-Be Star: Our safety and star wide receiver gave a surprising answer. I was anticipating that he was going to say his one-handed touchdown catch, which rates as the second-greatest middle school football catch I’ve ever seen. Instead, his answer was, “Just being out on the field talking to everyone. Talking to [the Helicopter] during the game, to [First-Play Ray] or [the Big Gun]. That’s what I’ll remember. That was my favorite part.” The Would-Be Star is the best.

The T: His endless confidence is matched only by his charm. “I’m gonna remember stepping out of bounds,” he said, looking at the floor and shaking his head. Twice this season the T was one footstep away from breaking 70-plus-yard touchdown runs; both times his toes juuuuuuust barely caught the sideline. We scored more than 100 points over our last three games, and the T still wanted more.

The Big Gun: Our star linebacker/fullback and most ferocious hitter. “That one play when [the Helicopter] rolled out and threw it and one of the other team’s linemen was gonna hit him and I just laid him out.”

The Helicopter: He spent the entire season throwing Street Fighter–style fireballs at the other team. “All my touchdowns,” he said, a smirk on his face. A seventh-grade player listening in on the conversation from a few steps away interjected, “Or that interception you returned for a touchdown?” The Helicopter processed the seventh-grader’s note, smiled, then asked back, “Which one?”

The Helicopter owns the universe.

Watch it first and then read the notes.

• It was put together by director Ronnie West, who is (clearly) very good at his job. I gave him very little instruction, something like, “Oh, um, just make it cool, I guess. I don’t know. Make it look like how I feel in my heart.” He was like, “OK, I got you.” AND THEN HE GOT ME. It’s exactly what I wanted, and exactly how I see the players when I look at them. The video flows how game day flowed: There’s a lot of buildup, and a lot more buildup, and even more buildup, and then boom! The game is on and it moves quickly and then it’s over. I’ve never really put much emphasis on whether we won a game or not; mostly I just wanted the kids to try hard and feel proud of themselves. Really, there’s as much to learn when you lose as when you win. And I tell that to the kids all the time. It’s pretty cool when your team wins all its games, though.

That’s it. Thank you. Thank you to everyone who read this column and said nice things and passed it around and all that. It means a lot and it meant a lot.

Middle school basketball is next.