Tuesday Night Lights: 'Does This Count as a Win, Coach?' 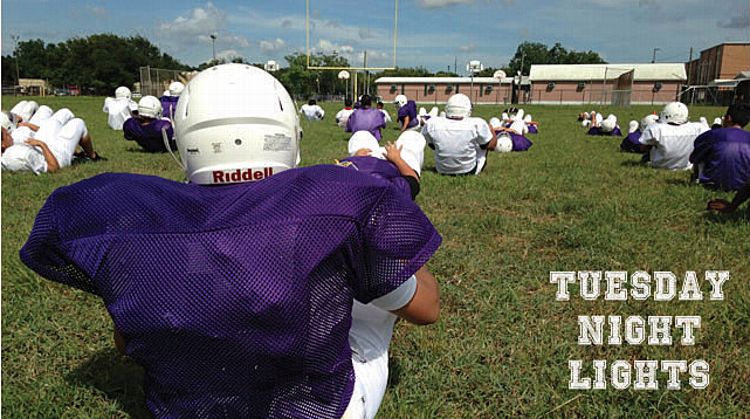 A good problem: I read this book last Christmas called Coaching Confidential. It was about some of the stuff that goes on behind the scenes with NFL coaches. It was insightful. But it didn’t have any advice on what you’re supposed to do when one of your players gets detention for farting on a kid’s arm in math class. Like, what’s the proper way to deal with that? Because on one hand, that’s definitely not part of any classroom syllabus or daily objectives, I’m sure of it, so the kid is breaking the rules. But, on the other hand, that’s the funniest thing that can happen in life. Try not to laugh when a kid somberly tells you that that’s why he got in trouble. It’s impossible to be serious in that situation.

Reporter: Coach Fox, Coach Fox. Can you tell us why Knowshon Moreno didn’t get any touches in the first half today?
John Fox: Oh. Yeah. Knowshon farted on Peyton.
Reporter: I’m sorry?
John Fox: He farted. Right on Peyton’s arm. We can’t have that.

Not a good problem: games getting canceled.

The rule is simple: You have to practice in pads for at least four days before you can play a game. I don’t know when they enacted that rule. It’s been there for as long as I’ve been coaching.

I agree with this rule. For a lot our kids, seventh- or eighth-grade football is their first experience with the game in a proper way. They’ve played in the park before, or during gym class, or at home in the street, but generally have never been trained how to properly catch or throw or take a handoff. The most important thing they learn, however, is receiving and delivering tackles.

Most of them, it would appear, arrive thinking that the best result of any tackle is that both players end up paralyzed afterward. They go in eyes closed, chin down, skull first, aiming right for the other player’s spine, which is definitely not that great. This isn’t because they are just so incredibly fearless. In some instances, it’s actually the opposite. We had one kid at linebacker a couple years ago who literally turned around and ran away from a running back. When I asked him about it, he said “He was bigger than I thought, Coach.”

So early in the season, after we get our pads and helmets (delivered by the district), we spend a fair amount of time walking through the proper way to hit and be hit. It’s completely necessary. We don’t build sledgehammers, we build good tacklers. The motto is you don’t have to kill the other players, you just have to get them on the ground. Wrap them up and drag them down. It doesn’t take long to walk through the basics, but it takes the entire season to get right.

So that’s what’s up.

The bad news: It would’ve been fun to get the season started, particularly against a school that we’d likely have beaten.

Players Who Did Something Good This Week

Despite not playing our season opener, we are into our third week of practice. Some of the kids who did good stuff this past week:

Boom Boom: He plays on the defensive line (generally at right defensive end). He arrived late during equipment pass-out day, so he didn’t receive any at first. That meant we could use him only to hold up tackling dummies. We received our second batch of pads and helmets and he got his and OH MY GOD. He’s like middle school Bruce Smith right now. He’s just bowling over poor left tackles. If he plays in games like he has these last two days, he might get 90,000 sacks this season.

The Hulk: A seventh-grader who’s less a seventh-grader and more a Ford F-150. We were gifted him. He was supposed to have been playing for a Pop Warner team outside of school, but those leagues are organized by weight limits and he’s too big for his age bracket. Make no mistake: He’s not an overweight kid. He’s just BIG. And FAST. And TERRIFYING. We were running through kickoff drills and The T, one of our fastest players, was back receiving. He caught the ball, broke through a few arms, then began sprinting down the sidelines. Everyone assumed he was gone. But then the Hulk came. He insta-calculated an angle and ran toward his spot. He looked like a great white swimming after a dolphin. Right around the 40-yard line he left his feet, diving for The T, grabbing him by the waist and flinging him down. The T popped up. “You didn’t think he was gonna get you, huh,” asked one of the coaches. “No, sir,” The T offered back, shaking his head. Nobody did. The Hulk is now our seventh-grade team’s outside linebacker. R.I.P., tight ends.

The Would-Be Star: Despite being slightly undersize, he has secured himself as one of the leaders of the team and has earned the trust and praise of the coaches. He does EVERYTHING hard. He even takes breaks hard: When we call for a water break, he shouts, “EVERYONE! WATER!” and then spriiiiiiiiints to the water station, drinks, then spriiiiiiiiints back and shouts, “EVERYONE! HURRY UP!” There are rumors that he had all of his inner organs replaced with a nuclear reactor as a baby, but I’ve haven’t been able to confirm that yet.

The Best Things Anyone Said at Practice

“Coach, I think I put these on wrong?” —A receiver, adjusting his thigh pads, which he’d put on his hamstrings instead of his thighs

We play School E. next Tuesday. They generally do not have a seventh-grade team, and if that’s the case this season, then we’ll move up a few seventh-graders and let them play a few snaps with the eighth grade. School Er. alternates between being the weakest football school in our zone and the second weakest football school in our zone. I don’t think we’ve ever lost to them. I don’t imagine we’ll start this year.