Just for Fun: Which Teams Should Be Trying to Trade for Tom Thibodeau? 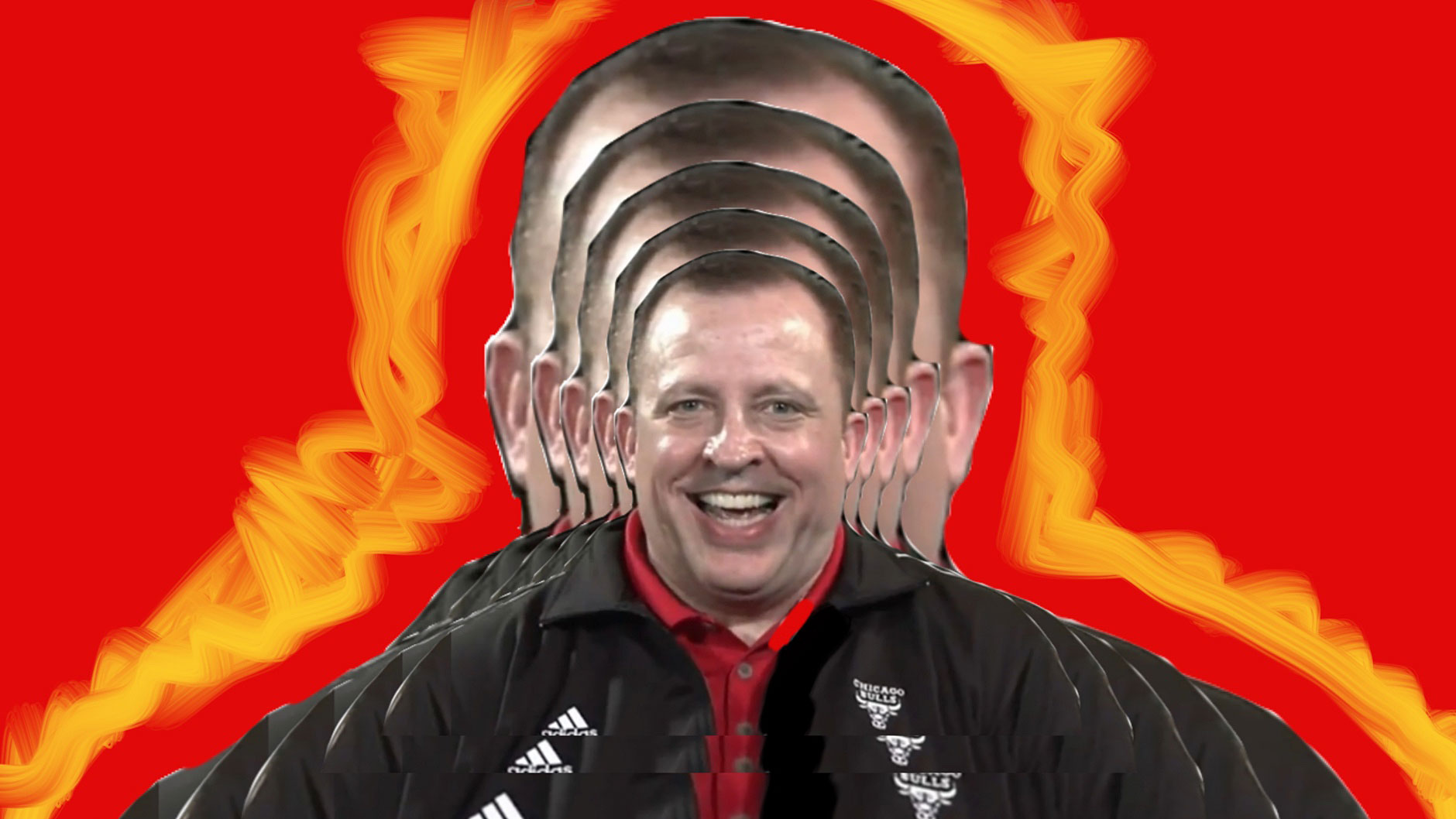 Gaze into the eyes of a madman. A hard-ass. A stickler. The type of dude who refers to spinal meningitis as “viral something something. Flu-like symptoms, whatever.” A descendant from the Pat Riley–Jeff Van Gundy school, where practices aren’t measured by normal units of time, but by how many times world-class athletes vomit like candy-asses running their first 5K. See the murderous glint in his eye as he orders you to run another round of suicides. Hear the bellicose foghorn voice booming from the sack-of-potatoes body that sounds like the last god of the walruses choking on a garbage bag filled with broken glass, commanding you, “Box out. Box out. Box out.”

This is Tom Thibodeau. A defensive innovator. The architect behind the steel carapace of flooded strong sides and moving screens that propelled the 2007-08 Celtics to the title while posting the best regular-season net rating (plus-11.35) since the ’96-97 Bulls. Since his time as an assistant with the Van Gundy–led Knicks and Rockets and Doc’s Celtics, teams with Thibodeau on the bench have finished out of the top five in defensive rating exactly twice: the 2005-06 Rockets and 1999-00 New York Knicks both finished sixth.

Since joining Chicago in 2010, the Bulls have weathered season-ending injuries to Derrick Rose, flus, and the aforementioned spinal infection to put up buckets-of-blood winning records and scorched-earth playoff runs. He is an elite coach.

So, with the revamped Bulls struggling for basically the first time in the Walrus God era — 5-7 over their last 12 games after a stretch of 10 wins in 11 and posting the lowest defensive rating in his coaching history (102.7) — here come the first whispers of Thibs’s seat becoming metaphorically hot. Does it seem far-fetched that the Bulls would let him go after a shaky segment of not even a whole season after four strong campaigns of elite defense, including the 62-20 Rose MVP year? YES. YES. YES.

But … we do live in a world where LeBron left Cleveland and then somehow, and even more implausibly, returned. A crazy old world. So, let’s play Who Trades What for Thibs.

After losing nine of 10, the Cavs have reeled off three straight wins. This improvement in form is either due to David Blatt taking the Cavaliers bowling in Los Angeles or a freshly rested LeBron James returning to the team. Hard to say which. Blatt, of course, has been dogged by reports that LeBron and Kyrie call their own plays while disregarding his (true), that Tyronn Lue calls timeouts without his knowledge (technically impossible), and that the team has been passive-aggressively trying to get him shipped back to Europe (quite possible). This season, the Cavs are posting a minus-0.8 net rating with a defensive rating of 106.7. Over their three recent wins, their defensive rating is 111.6.

The Cavs trade: Kevin Love and a lifetime pass to the Rock and Roll Hall of Fame. 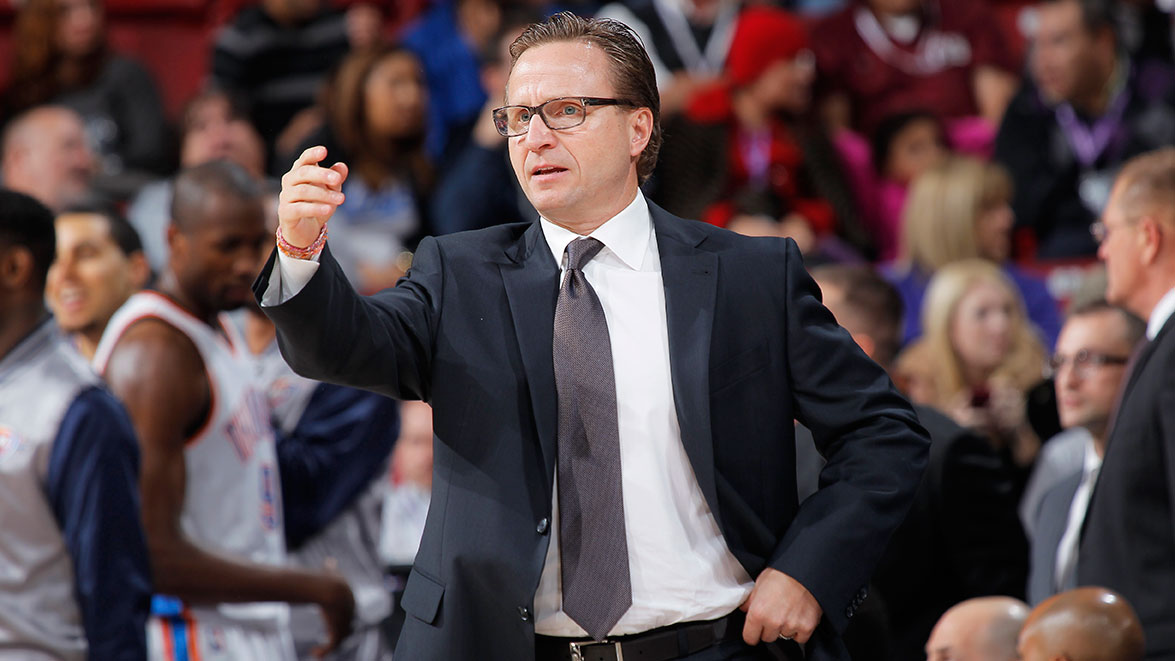 After seven seasons under Scott Brooks, the Thunder offense remains the most predictable among the Western powers, a your-turn-my-turn merry-go-round that, in fairness, works because Kevin Durant and Russell Westbrook are gods who walk among us. Russell is a nuclear reactor that feeds on anger (17 points, 15 rebounds, and 17 assists in a rout of the Warriors three games ago) and Durant is shooting 61 percent over his last five games.

But in a cutthroat Western Conference, with the Thunder still chasing the 8 seed and Durant’s impending free agency ticking like three sticks of dynamite duct-taped to Sam Presti’s dream journal, the franchise needs a coach who’s a difference-maker, not a nice guy who people like.

In the pre-Drake dark age of 2010-11, the Raptors were the very worst defensive team in the league, giving up 110 points per 100 possessions. That is a lot. Then the pre-Drakes plucked Dwane Casey from Rick Carlisle’s suddenly ripened coaching tree. In Casey’s first season, the Raps jumped 18 spots to post a 101.5 defensive rating, good for 12th best in the league, one spot under the mighty San Antonio Spurs.

Masai Ujiri then arrived in 2013 and immediately made his mark by foisting Andrea Bargnani’s lumbering, soul-dead, 1,000-yard bench stare on a swinging-for-the-fences-in-the-office-softball-league New York Knicks. A deal so bad that even now no current or former Knicks executive has copped to signing off on it.1 Plans for an Ujiri commemorative plaque were launched after he shipped Rudy Gay to Sacramento. Those plans were upgraded to a full-on bronze statue once Ujiri, channeling Funkmaster Flex, screamed “FUCK BROOKLYN” to the delirious crowds gathered in Maple Leaf Square before a playoff game against the Nets.

"I know it sounds simplistic but we were a simple team last year. Everybody, every time they walked on the floor had no agenda." Casey

Now, the Raptors are scuffling. They’ve lost seven of their last 10, their 104.6 defensive rating has them squarely in the bottom third of the league, Casey is making cryptic comments about agendas, and the ever-even-keel Raptors fans have about-faced from “WHY IS NO ONE TALKING ABOUT HOW AWESOME WE ARE?” to “WHY DO WE SUCKKKK???”

BAH GAWD, IS THAT THIBS’S MUSIC?

The Raptors trade: Landry Fields, a shout-out on the next Drake track, the secret recording of James Dolan saying, “OK, let’s do the deal.”

Tom Thibodeau is an upgrade over Tyrone Corbin like backpacking in Europe is an upgrade over being executed by lethal injection. That said, Thibs’s Bulls teams have always been near the bottom of the league in pace, while Kings owner Vivek Ranadivé clashed with the now-fired Mike Malone over the team not playing an uptempo style. Also, I think if you put a gun to Thibs’s head and demanded he run a 4-on-5 cherry pick, he’d grab the gun barrel with both hands and be like, “Just pull the trigger, punk.”

The Kings would not do this deal.

Tyreke Evans is a slasher who’s shooting 48.7 percent at the rim and averaging three turnovers and five assists per game, Ryan Anderson’s 3-point percentage is down seven percentage points from last season, Dante Cunningham has a plus-minus of negative-20 in 604 minutes, and Jimmer is shooting 19 percent from 3. So, it’s a testament to the continuing evolution of the biological mutation known as Anthony Davis that the Pelicans have the ninth-best offense in the league, with an offensive rating of 105.5. The Pellies do basically everything better when he’s on the court.

The improvement needs to come on defense. The Pellies lurk near the bottom of the league, giving up 106.2 points per 100 possessions.

You know what that means: THIBBBBBBBS. 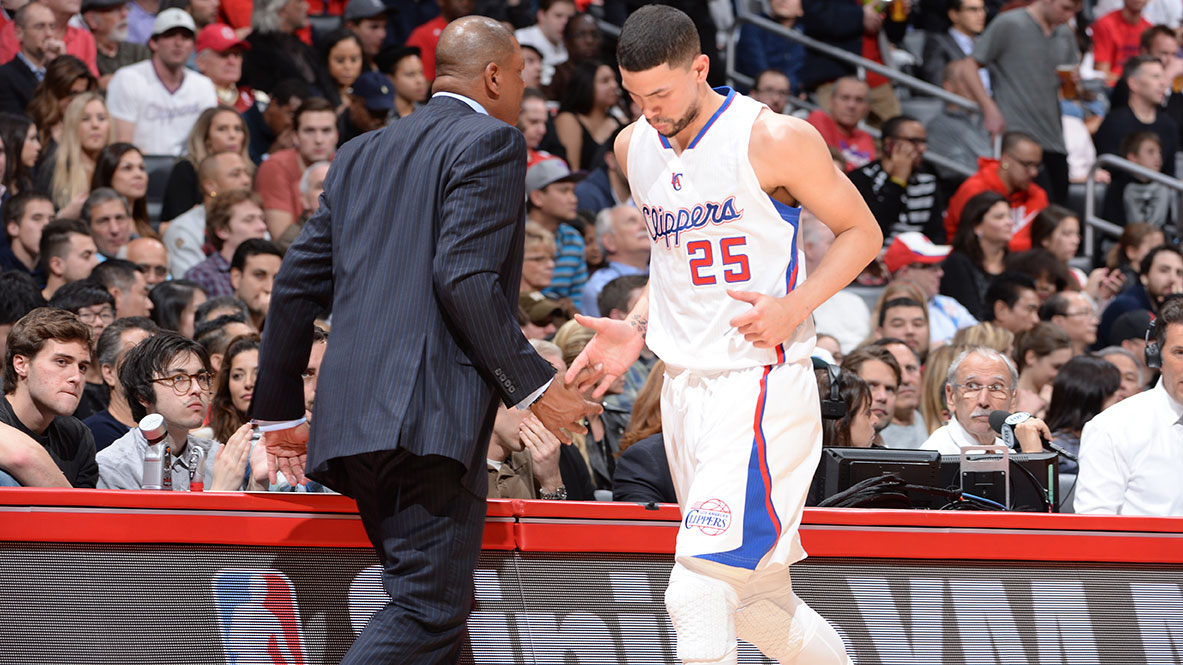 It makes too much sense. The Clippers are an elite offensive team that can’t consistently stop anybody. Doc gets to go upstairs full-time so he can totally dedicate himself to reacquiring all his old Celtics and/or family members. Thibs gets to mold DeAndre and Blake into the young versions of Doc’s old Celtics. Mike Woodson stays not being a head coach.

The Clippers trade: a lifetime supply of Surface Pro tablets.

Byron Scott came in promising to revamp the team’s defensive identity despite being the only coach in the modern NBA to lead a team to three straight bottom-five finishes in defensive efficiency. The Lakers are currently the third-worst defensive team in the league.

Bonus: Kobe deciding he’s definitely retiring after his legs detach from his body during one of Thibodeau’s Bataan Death March practices.

The Lakers trade: Nash’s expiring, a life-size wax figure of Byron Scott with his arms crossed that might actually be the real Byron Scott, and the Lakers Bros.