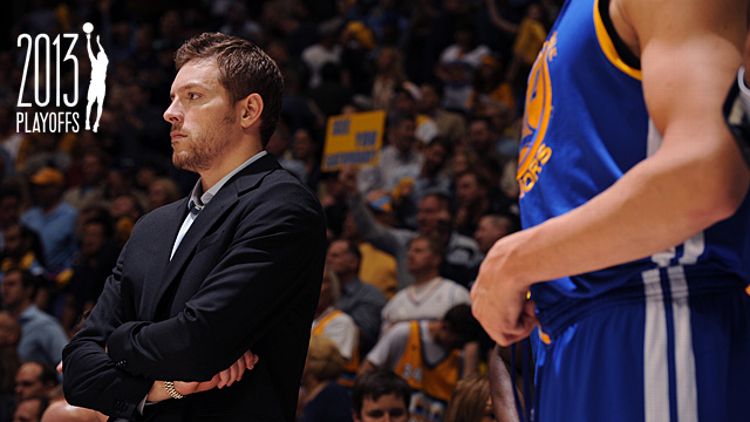 After All-Star forward David Lee went down with a torn hip flexor, it appeared this Golden State Warriors team was toast. The Nuggets were dealing with their own injured star, Danilo Gallinari, but the team’s depth and impressive second half of the regular season still put them as the odds-on favorite to win the series. Yet by replacing Lee’s production with a combination of Harrison Barnes, Draymond Green, and Carl Landry (and by riding Stephen Curry’s hot hand), Golden State roared back from a 1-0 series deficit to beat the Nuggets in six games and become the best story of the first round.

As was the case with the Nuggets, most are assuming that without Lee, Golden State’s matchup against the Spurs — a superior regular-season team inching closer to full strength thanks to the extra rest they received by making short work of the Lakers — will be the end of the road for the Warriors. But a funny thing might have happened for Golden State when Lee went down — they might have gotten better.

To grasp how a team could get better by losing a player of Lee’s caliber, it’s important to understand what about his game makes him an All-Star. His main strengths lie mostly in his passing and rebounding. The team’s assist ratio dropped about four percentage points when Lee was off the floor in the regular season, according to NBA.com/stats, a fairly noticeable dip and something the Warriors likely won’t be able to replace. The rebounding, however, is a different story.

It’s easy to praise any player who snatches rebounds by the dozen, but it’s important to remember that rebounding can often be a replaceable skill, especially when a player relies on gobbling up opponents’ misses to hit that number. Every game, there are a finite number of defensive rebounds available, and someone has to account for them. The number of offensive rebounds is theoretically limitless on any given possession, and neither Lee nor the Warriors were exceptionally good at creating second chances. On the defensive end, Andrew Bogut should be able to secure the ball enough to nullify Lee’s absence.

How Golden State could survive without Lee is easier to understand when considering his flaws. Lots of words have been written about Lee’s substandard defense, so there’s no need to rehash that. There are still pieces of his offensive game, however, that are lacking. While a capable-enough shooter, Lee’s range only extends to about 18 feet. As I’ve mentioned before, spacing is a key aspect to having a successful NBA offense. The more that teams can create, the better their chances to produce points at an elite clip. Without a jumper that extends to the 3-point line, it’s hard for Lee to provide ample room for his teammates to operate. Lee also struggles when given the chance to attack in isolations. His .71 points per possession in isolations that end in a shot attempt is a paltry figure that ranks far behind the game’s elite. (For comparison’s sake, Kevin Durant was 12th at 1.02 PPP.)

Golden State got a first-round boost from Lee’s replacements being proficient in the aspects of the game where he is weak. Bumped up from his natural small forward position, Barnes acts as a true stretch 4. Because he can convert from deep at a solid rate — 35.9 percent in the regular season — the former North Carolina standout pulls an opposing frontcourt player a few more vital feet out from the paint than Lee does. Barnes is also more than capable of attacking those same big men off the bounce from there. Against Denver, the lineup with Barnes at the 4 produced an offensive rating of 111.8 in 76 total minutes, a number that would have led the league in the regular season.

Green, meanwhile, is the inverse of Lee. A poor offensive player, at least until the playoffs (more on that in a second), the rookie second-round pick makes his mark as a high-energy, versatile defender. During the regular season, the Warriors were more than three points worse defensively per 100 possessions when Green was on the bench. That differential has been even bigger in the playoffs (small sample size alert, but it continues a trend that was already well established).

It’s almost the exact opposite of Lee’s impact on the defense, and it’s not hard to see why. Lee typically makes a mess of rotations and struggles containing ball handlers in the pick-and-roll. Green is very advanced with his awareness in help defense for a rookie and is something of a pick-and-roll buster when playing as a 4.

One of the main reasons this wasn’t a bigger issue in the regular season was Green’s dreadful performance on offense. The rookie shot just 32.7 percent from the field and 20.9 percent from beyond the arc, numbers that completely nullified his contributions on defense. Green suddenly found a competent stroke in the Denver series, shooting over 50 percent from both the field and the 3-point line.

The contributions of the two rookies, combined with the steady Carl Landry, transformed the Warriors. Given how the injuries to Lee and Gallinari affected their respective teams, it might even be unfair to call Golden State’s win an upset. The question going forward, though, is how much of this is sustainable against the Spurs.

Barnes can still be used at the power forward spot whenever Tim Duncan and Tiago Splitter aren’t manning the frontcourt together. Matt Bonner and DeJuan Blair don’t represent post threats capable of punishing the rookie down low. San Antonio also doesn’t gain a huge advantage if they choose to counter by going small, and head coach Gregg Popovich has rarely shown an inclination to do so.

Landry’s role will stay about the same, but the big question going forward is what to make of Green’s offensive explosion. Popovich will no doubt force Green to beat him from the outside whenever the rookie is on the floor, and for Golden State to reap the benefits of his defense, Green must continue to convert open looks at a much better clip than he did in the regular season.

This is especially important considering how vital Green’s defense will be against pick-and-roll-scoring savant Tony Parker. In fact, even if Green’s offense regresses badly, he still might provide more value than Lee would in this series for his defense alone. Lee would have surely been a target in pick-and-rolls for Popovich, and his absence gives the Spurs coach one less player to attack.

Against Denver, it was hard to get a feel for what Lee’s absence really means. The Nuggets were without their own injured star, and Green had a stretch that defied explanation. The Green-Barnes combination may very well be a fluke destined to be exposed by a team like San Antonio. But if Golden State does push the Spurs to the limit, if they show they cannot only survive but thrive without Lee, it may call into question the true impact he has on the Warriors’ success.

Who's That Guy? Jimmy Butler!