Things We Found on eBay: A Tyson-Spinks T-shirt, a Steve Novak Bobblehead, and More 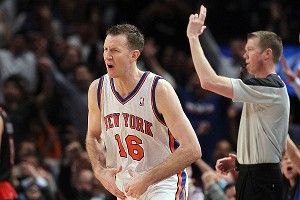 Simmons found more things on eBay. Some are awesome. A few aren’t.

I Understand the Intrigue

Even though this is the second straight week that Spinks-related gear has come up (leading me to believe a certain someone has a “Spinks Vintage Shirt” Google Alert), this is the better of the two finds. Why? You get TWO shirts. Never underestimate the power of having multiple versions of the same item. It screams, “I can’t wait until my significant other and I show up to this party wearing the same shirt, completely being those people.” It’s corny when you’re both wearing full denim outfits with matching cowboy hats, but when it’s two matching Tyson vs. Spinks shirts? Fantastic. If you have someone to keep you warm at night, wait for this item to get reposted (no one bid on it), and if you’re single, find a way to get these shirts and then get out there and find you a soul mate.

I don’t have the slightest clue what this game is, because you don’t need a cable or wireless connection to play it, but it looks extremely cool. Why is it so cool? Because it’s from 1912, making it 100 years old. Anything that is 100 years old is awesome, especially if it is sports-related and (potentially) fun-related. Also, the fact that the pegs have traveled with this board 100 years is a true accomplishment. To put it in perspective, I lost all those little balls that came with my Hungry Hungry Hippos set between Christmas and MLK Day. So yes, while this price is sure to continue to rise ($200 and rising, and over 30 bids and two days left), I’d get involved, especially for the die-hard baseball fans.

Yes to everything about this. I’m not a huge fan of the bobblehead as a collector’s item, but these are just too good. What I especially love about the set is that two of the bobbleheads look terrifyingly similar to the real people (Patrick, Berman) and the other two couldn’t be more off (Scott, Mayne). All four look like Claymation characters from Wallace & Gromit, which adds to the hilarity of these wobbly-headed sports anchors. It’s a great find; congrats to whoever won the bid at $51, not only because they’re creepy enough to hide in random corners of one’s home, but also because of what the seller notes in the description: “Yes, the set includes the ‘Dan Patrick’ Bobble that is nearly impossible to find.”

I know I just said I’m not a huge fan of bobbleheads, but again, this is just amazing. My mind is blown that this only went for $4.25. Just to put that in perspective, the shipping and handling costs $6.99. Who doesn’t want a Steve Novak college bobblehead in their home? I’m extremely jealous that I’m not the winner of this, especially since I would have spent $20 for it. (But seriously, I’m not, like, some bobblehead freak that collects them whenever I can. I assure you I’m not a cat lady for bobbleheads. I’m just a guy that loves Steve Novak and the throwback SportsCenter lineup. That’s all. OK?)

Nothing Intriguing About These

So I get it, but no. I’m not saying anything is wrong with a poster of three Larry Birds holding three MVP trophies while wearing three different cardigans that spell “MVP.” On the surface, it’s a great poster, but the only way I could tolerate this item in my house is if I could get those cardigans. All three. If this poster was hanging in my home and I didn’t have those sweaters, all it would do is taunt me on a daily basis, reminding me that my wardrobe was completely inadequate. So yes, while I completely support an eBay search that led Simmons to this item, you don’t want this poster unless you hate yourself.

This is insane. A snapback Grizzlies hat went for $225.00, after 36 bids. What? Also, why Simmons has this infatuation with the Grizzlies (stumbled on a Big Country Reeves jersey last week) I have no idea. TWO HUNDRED AND TWENTY-FIVE DOLLARS? Unreal. I love snapbacks, but no. Just no. Not a Grizz hat for the price of an iPod touch. No. I hope someone from Memphis bought it, just to be rude.

You are looking at an item that rarely, if ever, comes up for auction…
This is a GAME WORN NBA REFEREE UNIFORM
Worn by SEAN WRIGHT #65….remember when Rajon Rondo got ejected for throwing the ball at a ref…that was Sean Wright.

I saw this and immediately thought that this was awesome. The jersey from the referee from that Rondo game. That’s such a good find. But then I read it a second time, and it’s not that. It’s just a jersey that he wore in a game. Once. Not the Rondo game. Probably the Za Zaza Pachulia game. Or the Eddie House game. PASS.

No amount of Boston pride makes a Stephen King bobblehead awesome. None. Just no. Never.