The Year in Gennady Gennadyevich Golovkin 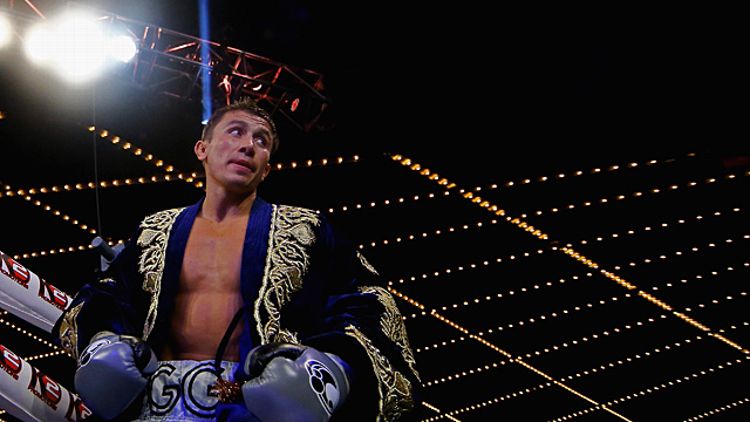 The scene at Madison Square Garden on Saturday night for WBA middleweight champion Gennady Golovkin’s title defense against Curtis Stevens was a far cry from the atmosphere at Golovkin’s first fight on U.S. soil, just 14 months ago at the Turning Stone Resort and Casino in Verona, New York.

That night, Golovkin’s opponent had a name even harder to spell and pronounce than the champ’s — Grzegorz Proksa, from Poland. Press row was not a row. It was five or so reporters sitting at a ringside picnic table. The crowd was sparse enough for me to spot a married couple I’d sat next to earlier that evening at the Season’s Harvest buffet. Few in attendance had a rooting interest — or really, any idea what to expect — because hardly anyone knew who these guys were.

Saturday at the Garden, Golovkin’s challenger wasn’t a marquee name in the middleweight division, but at least the Brooklyn-born Stevens was more familiar than Proksa. The real contrast could be seen in the Theater. The media section was five rows deep. The near sellout crowd was packed with fans waving the sky blue–and-gold flag of Golovkin’s native Kazakhstan, and it included celebrities like Louis C.K., Steve Buscemi, Rosie Perez, and (WTF?) Susan Sarandon. The promoters had even shelled out for boxing’s ultimate hood ornament, Michael Buffer (on his 69th birthday, no less!), to confer status on the bout with his trademarked “Let’s get ready to rumble!”

Yes, a GGG fight is officially an event.

The Golovkin hype train has gained steam (justifiably, in my opinion) with each successive bout since the Proksa fight, which drew a TV audience of 685,000, HBO’s lowest of 2012. Mostly, this is because he keeps knocking out his opponents, but each event has also contributed some new nugget of gruesome or quirky lore to Golovkin’s snowballing stardom. When he beat Gabriel Rosado in January, the violence was so one-sided and gory that it led to Rosado’s trainer yelling, “Your son’s gonna die, man!” at the boxer’s father before stopping the fight. It’s also when Golovkin, smeared from his collarbone to his knees in Rosado’s blood, first described a vanquished challenger as a “good boy” on HBO. Golovkin fans have since latched on to the term and popularized it on boxing websites. (Typical usage: “100 percent GGG will make a good boy out of Sergio Martinez.”) Next, he nearly beheaded an overmatched Nobuhiro Ishida on an independent pay-per-view card in March, and while the spectacular third-round knockout told us precisely zero about how Golovkin would fare against elite competition, it did deliver perhaps the best boxing TV graphic of 2013 — a bit of trivia at the bottom of the screen during Golovkin’s introduction that read: “FAVORITE FOOD: MEAT.” Then, in June, his body-punch knockout of Matthew Macklin produced arguably the most painful moment in boxing this year, leaving Macklin whelping and writhing on the canvas as evidence.

Each fight seems to create a signature moment, and each signature moment was another shovelful of coal into the hype train’s engine. By the opening bell Saturday night, the locomotive was chugging along at a Denzel Washington–in-Unstoppable pace, and Stevens was next in line to be flattened.

Fans who watched the fight on HBO and those in attendance at Madison Square Garden didn’t have to wait for Golovkin’s next signature moment. It came near the end of the second round, when the fighters began to open up after a somewhat tentative start, and Golovkin sent Stevens sprawling on his back with a pair of left hooks. Legs akimbo, brow furrowed, eyes wide, and lips pursed, Stevens made a face like the ones babies make when they first taste lemon. It was a near-perfect depiction of what being separated from your senses for an instant must be like — synapses doing somersaults, nothing between your ears but a high-pitched WHIRRRRRRR -— and it will probably be remembered as the boxing GIF of the year.

After the knockdown, I assumed, along with almost everybody at MSG, that Golovkin was seconds away from tying a bow around his 28th victory. A few more wallops, maybe Stevens goes down again, and the referee dives between them to call the fight. But that’s not what happened. This time, even though Golovkin had produced the next chapter in his book of totally awesome boxing memes in Round 2, he still had a fight to win and an opponent who, it turned out, was far from beaten.

Before and after the knockdown, Stevens showed an ability to stand his ground against Golovkin that other recent challengers haven’t. Rosado, Ishida, and Macklin all unraveled rather quickly into a survival mode that meant scurrying from corner to corner in the ring while Golovkin stalked, cut them off, and delivered punishment. For lengthy stretches, Stevens managed to keep his back off the ropes, and even though he got outboxed during these portions of the fight and Golovkin controlled him with a sharp jab, Stevens was fighting back more convincingly than others had. In the fourth and fifth rounds, Stevens forced Golovkin back with solid overhand rights, and he even managed to land his money punch, the left hook, a couple of times. Stevens was still getting outjabbed, outworked, and worn down in these rounds, but his brief rallies may have been the most exciting parts of the fight. They showed us something we hadn’t seen from Golovkin before: How he takes a shot from a known power puncher.

Unfortunately for Stevens, we saw that Golovkin was mostly unfazed by those blows. That doesn’t mean he was careless or that he walked through Stevens’s power. Golovkin stepped out of range when Stevens threw combinations, and he appeared to temper some of the fury in his typical onslaught out of respect for Stevens’s counter left hook. On the handful of occasions when Stevens landed cleanly, however, Golovkin never seemed hurt.

Over the final three rounds, the damage began to accumulate on Stevens. Golovkin poked and corralled him with the jab, battered him into corners with a thudding overhand right that often landed around Stevens’s high guard, and followed up with hooks to the body and head. Stevens was hurt like this in Rounds 6 and 7, but he still managed to push back off the ropes with a couple of lively combinations. When this happened, Golovkin would reset, get Stevens back where he wanted him, and return to his duty with grim ferocity. As the pounding continued, Stevens’s attempts to fight back — to land one big counter that could swing the bout — grew less and less spirited. He spent the last two minutes of the eighth round getting beat from pillar to post.

This is the downside of a Golovkin fight: When an opponent won’t go down, he just gets clubbed into submission, and the spectacle can be unsettling. As Round 8 wound down Saturday night, the image that jumped into my head was of a cat that had caught a mouse but had not yet killed it; batting it back and forth, with the prey alive but unable to do anything to save itself. I don’t mean to suggest Golovkin was toying with Stevens in the eighth round; he was trying hard to finish the fight. But the way Stevens survived that last minute — as if there were nothing left to do but wait for the end — reminded me of the mouse. After the bell, referee Harvey Dock asked Stevens’s corner if they wanted to stop the fight, and they agreed.

From now until next February, when Golovkin already has a fight scheduled in Monaco, boxing fans will be parsing how the Stevens match affects GGG’s stock. Was Stevens, a 15-1 underdog whom many expected to be dispatched within four rounds, better than we thought? Or is Golovkin a shade less superhuman than his reputation suggests? What is more revealing: another spectacular highlight and a cumulatively overwhelming performance by Golovkin, or the limited but clear success Stevens had against him? Does it change how Golovkin would fare against Sergio Martinez (who might be too injured and too far past his prime for it to matter) or against Andre Ward (who fights one weight class above Golovkin)? Nobody really knows. But Golovkin, with his domination of Stevens, did enough to keep the hype train chugging.

College Football, Week 10: What You Missed While Missing Almost Nothing