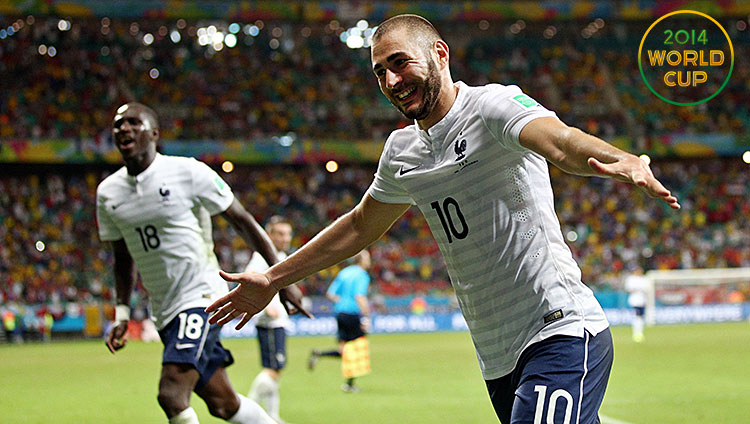 If you were vaguely unsettled by the most celebrated loss in the history of U.S. soccer, I’ve got good news for you. The knockout rounds are here — no more draws, no more counting points, no more depending on other teams. Win and advance, lose and go home. So, with the new tournament starting, it’s time to rank the 16 teams in the knockout round.

Patronizing Pat on the Head Division

16. Greece
Greece has a reputation for being a stingy defensive team ever since it shockingly won the Euros in 2004. Its defense is considerably worse than it was back then, and it doesn’t have any competent attacking strategy. But, hey, it got an extra-time penalty to send Ivory Coast packing, so you know, good for Greece, I guess. Reaching the knockout stages is a huge win for Greece; going any further is a loss for the rest of us.

15. Nigeria
There’s a temptation to lump geographically, stereotyping African teams as athletic but undisciplined. Nigeria bucks this trend. It is athletic, it is fairly disciplined, and it isn’t good at all. It got through thanks to a 1-0 win over Bosnia and Herzegovina, benefiting from one of the worst offside calls in recent memory. Nigeria has to play France, so it probably isn’t long for this tournament.

14. Uruguay
It was a defensive squad that depended on Luis Suárez to score goals. And Suárez has snacked his way out of the tournament. Plus Uruguay is in the South American bracket of death with Brazil, Colombia, and Chile. We always have groups of death, why not have a bracket of death as well?

13. Algeria
Algeria is the surprise team of the World Cup. Headlined by Sofiane Feghouli, it has shown the ability to play defensive counterattacking soccer (see when it took the lead against Belgium) or control a game start to finish (see its blowout of South Korea). Algeria has the misfortune of facing Germany in the round of 16, but if it can open the game up like Ghana did, it may have at least an outside chance of leveling an upset.

12, 11, 10. CONCACAF
It’s pretty hard to separate Costa Rica, Mexico, and the U.S. right now. The U.S. emerged from the Group of Death, but the only reason Costa Rica’s group wasn’t considered deadly is that popular opinion suggested the Ticos were too weak to compete with England, Italy, and Uruguay. Oops. And Mexico, left for dead before the tournament, didn’t put a foot wrong, playing Brazil to a hard-fought draw.

Then there is the U.S. Consider this: It’s now the third time in four World Cups that the U.S. has advanced to the round of 16. Should it (minorly) upset Belgium, it will be the second time in the last four World Cups that it reaches the quarterfinals. Maybe it’s time to stop treating this as a surprise and consider the possibility that the world should expect the U.S. to get here. Now let’s see if it can overachieve.

9. Switzerland
The Swiss took care of the two teams that they needed to, but got absolutely smoked by France, so it’s a little hard to rate them. They certainly aren’t elite, but does that mean they are borderline contenders? Borderline fodder? It’s hard to tell. They have their two stars in Xherdan Shaqiri and Ricardo Rodriguez, who can provide firepower and hard work in the midfield. But, man, their defense is shaky. That probably doesn’t bode well with Argentina looming.

8. Belgium
If having full-backs didn’t matter, Belgium would be three or four spots higher. Its attacking line and midfield reads like a who’s who of the Premier League, and defensively, it has a wealth of center backs. That’s good, because it depends on two of them to play full-back every game. This is not only a potential defensive problem, but it leaves Belgium unable to spread the field and act dynamically in attack. It won all of their group games, though it had to come back against Algeria and left it to the last 10 minutes against Russia. To a certain extent, that’s by design. Belgium will keep it tight, not let its fake full-backs get exposed, and rely on Eden Hazard to eventually make something happen, or throw Marouane Fellaini’s hair forward as an extra target. But, given its mismatched talent and rather underwhelming performances, it’s fair to ask if it can beat better teams.

7. Chile
I’m sure my love for Chile is readily apparent by this point. But losing to the Netherlands in the last group match made life a lot tougher. Instead of facing Mexico and then the winner of Costa Rica and Greece, it is now paired with Brazil in the round of 16. And even if it should somehow shock the hosts, Colombia looms. It’s hard to imagine this side getting to the semifinals. But even if it’s a doomed cause, it’ll certainly be fun to watch. Chile’s high-flying style makes for an especially great contrast against the functional Brazil.

6. Argentina
Same as it ever was. Argentina has amazing attacking talent that doesn’t quite work together and lots of defensive questions. With Lionel Messi scoring, at least we can do away with the silly “He doesn’t play well for Argentina” narrative. The team still seems broken, though. It is playing two true forwards and Messi, which means very little defensive cover. It’s also playing two central midfielders — Fernando Gago and Javier Mascherano — who offer very little going forward. That leaves all the transition work to Messi and Ángel di Maria. And yet, despite all of that, there’s just so much attacking talent that you can’t count Argentina out. And you shouldn’t, but you can remain skeptical until you see it work.

5. Colombia
Colombia has done everything you could ask. It has scored goals, and defended, and been perhaps the most entertaining team in the World Cup. It has introduced the world to James (say it with me now, Ha-mez) Rodríguez and Juan Cuadrado. If there’s a concern, it’s that it had a very easy group with Greece, Ivory Coast, and Japan. And while it has an easy round of 16 matchup with a de-Suárezed Uruguay, a quarterfinal meeting with Brazil is likely.

4. Germany
Germany was one of the pre-tournament favorites, so it wouldn’t be a surprise to see it win it all. But there are concerns. Philipp Lahm played all three group-stage games in the midfield, with Jérôme Boateng and Benedikt Höwedes playing in the full-back positions. This made Germany another member of the four–center back club. Unlike Belgium, though, Germany’s attack isn’t hampered by the lack of width or transitioning from defense to attack. The skill and cleverness of Mesut Özil and Mario Götze, combined with Thomas Müller’s bloodhound nose for goal is a powerful axis to build around. But defensively, Germany is particularly vulnerable to counterattacks at speed (like the one the U.S. almost caught it with at the end of Thursday’s match). In the knockout stages of this tournament, that could be all it takes.

3. The Netherlands
No country raised its stock more during the group stage than the Netherlands. The shift to playing three center backs and pushing Arjen Robben forward to play next to Robin van Persie has worked wonders. The Dutch are the best example this World Cup has that the best tactics aren’t the most complicated ones. They man-mark in the middle of the field and hit long balls to take advantage of Robben’s speed and Van Persie’s precise finishing. It’s a simple approach tailored to the talent at Dutch manager Louis van Gaal’s disposal.

2. Brazil
The Brazilians are who we thought they were. They’re a team full of functional players who provide Neymar a platform to shine. Unlike Argentina, which has a similar system built around Messi, Brazil is a cohesive unit. It does have holes, though. Marcelo and Dani Alves are definitely too aggressive getting up the field from their full-back positions, occasionally leaving too much space behind them. Hulk would look like a shell of his former self if he wasn’t too big to be a shell of anything. But despite all of that, it remains Brazil, playing in Brazil, with a genuine superstar who can’t stop scoring goals. It’s going to be very hard to beat.

1. France
No single team has looked more complete than France. Its absolute demolition of a decent Swiss side (especially in the first half) was the strongest performance by any side during the group stages. France plays a fairly traditional 4-3-3, but it has five athletic midfielders (Paul Pogba, Blaise Matuidi, Moussa Sissoko, Yohan Cabaye, and Morgan Schneiderlin) who are equally adept at pressing without the ball and passing with it. Karim Benzema is an elite scorer, and he has been surprisingly strong when moved to the wing to play with Olivier Giroud. And, despite losing focus late against Switzerland, its defense has appeared equally solid. In a World Cup where every single team has had a weakness, France has been strong all over the field. It scores goals, it defends, and just as important, it will be fresh going forward given that manager Didier Deschamps has rotated his squad heavily.

About Last Weekend: All About the Cup