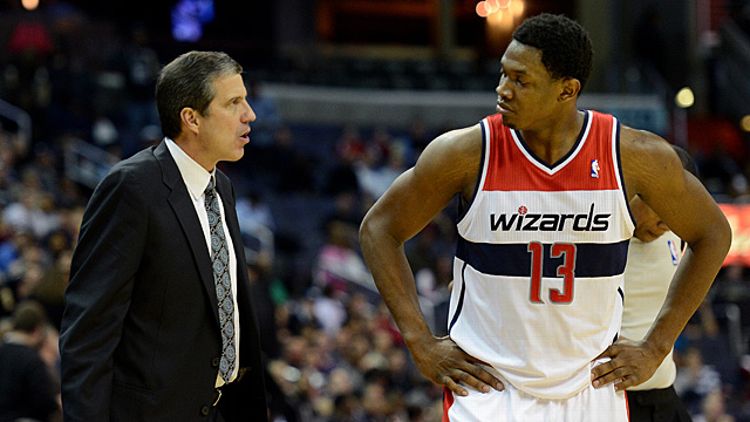 There are a number of incredible stories currently populating the sports pages here in the nation’s capital. Obviously and quite appropriately, the heroics of His Holiness the Black Jesus Robert Griffin III predominate. Not only does he seem to win an award or set a new Redskins or NFL rookie record every game he plays, but, in the unlikeliest of unlikely turns, he also has this town dreaming about the possibility of playoffs. The Redskins host the Giants next Monday night, which will also mark the first relevant football game played in D.C. in December in almost seven years (to be truthful, it feels like 70).

The professional baseball team merely accomplished the best record in the major leagues, and key members won NL Rookie of the Year, NL Manager of the Year, and Executive of the Year honors. Imagine what they may be capable of if all of the team’s best players are permitted to play this upcoming season (sorry, still bitter).

And then there is the local professional basketball team. Incredible and record-setting in its own right.

You may have heard that the Washington Professional Basketball Team has not won a game this season. They have been close in several and played hard in most, and they certainly lead the league in moral victories.

And with the return of one of their two best players from injury, they sorta kinda might be on the brink of a breakout from winless prison (they lost their two games with Nene in OT by a combined total of three points). In any event, I appreciate that just about every team in the league would confront serious challenges if its two best players were unavailable to play, so I will leave it to real professionals to run through the misjudgments, miscalculations, and missteps that comprise the ingredients of this distasteful hoops dish.

Instead, I present the following string of tidbits, observations, and revelations pertinent to the Almost Bullets’ victory-less disposition, which may or may not shed some light on how the professional hoops team in D.C. is faring in this imperfect hoops-storm and when they may see the daylight of a W:

As the editor-in-chief of the Grantland operation recently noted, the Almost Bullets’ occasional starter at power forward has procured more personal fouls than points to date. Following last night’s pointless, four-foul performance, the count is now 34 fouls to 29 points. I have not researched it, but I’m going to go out on a limb and say this is a unique situation for a player selected no. 6 overall in the previous year’s draft.

Emeka Okafor is clearly a great guy. But it seems he has not fully recovered from the knee problems that kept him off the court a majority of last season. He’s honestly not been good at basketball this season, with career lows in points and rebounds, and as described more fully below he’s had almost no impact on games when it gets to be winning time. At $13.6 million this year and $14.6 million next year, that’s a bit of an issue. The Washington Professional Basketball Team was clearly overdue for an adult or two following last year’s experience with The Kings of Hoops Comedy. But it would have been a bonus to get a guy with character who also happens to be good at professional basketball. The Dalai Lama is also a person of high character, but I wouldn’t pay him more than $28 million over the next two years either.

I wish this was the name of one of the programs that the Sprout channel runs in the evening to help kids wind down and start thinking about bedtime. But it’s not. What is the opposite of “crunch time”? “Noodle time”? “Sponge time,” maybe? Whatever you want to call the first three quarters of an NBA game, that is when you are most likely to see two of the most well-paid players on the Almost Bullets play. Because they rarely play in the fourth quarter. And when they do play, it’s not for big minutes, and under no circumstances do either last three minutes.

Like many of his teammates, Jordan Crawford is not enjoying his best on-the-court season ever thus far. But he is not letting that affect how he posts to the world. Good for you, JCraw. Steez all day.

John Wall has the worst best seat in the house. Or is it the best worst seat? And he occasionally can’t maintain perfect composure as his teammates hurtle toward the winless cliff each night.

It has been reported in a few credible places that the Thunder were interested in Bradley Beal as a potential target in a James Harden trade. Who knows how serious the Thunder’s interest was or whether the Almost Bullets had serious conversations with the Thunder on such a deal, but if there was a 1 percent chance for such a trade and the D.C. team did not move all of the heavens to make it work, then I may have to seriously, seriously, seriously consider no. 9 below.

The coach is looking for something that works. Players that click. Says the coach: “I’d love to have an 8-9 man rotation. That’s my dream. And I’m playing 12-13 every night. You can’t do that in an NBA game. If you want to develop a group and then a group that comes in, I’m having a hard time doing that with the play right now.” Tough to argue that. In related news, the team started its fourth new group last night.

8. The Losing Streak May Cause Metaphysical Pain

9. The Losing Streak May Cause Reconsideration of Fandom

I hate to even bring this up, but there is a record for failing to win at the beginning of a season. You can get the number by adding together the jersey numbers of JCraw and Bradley Beal. The next five games are Portland, at the Knicks, Miami, at Atlanta, and home against Golden State. If Portland at home doesn’t work out for the best, looks like we may be saying … Warriors, come out and play!!!

I Suck at Football, Week 12: Nobody Argues With Janet