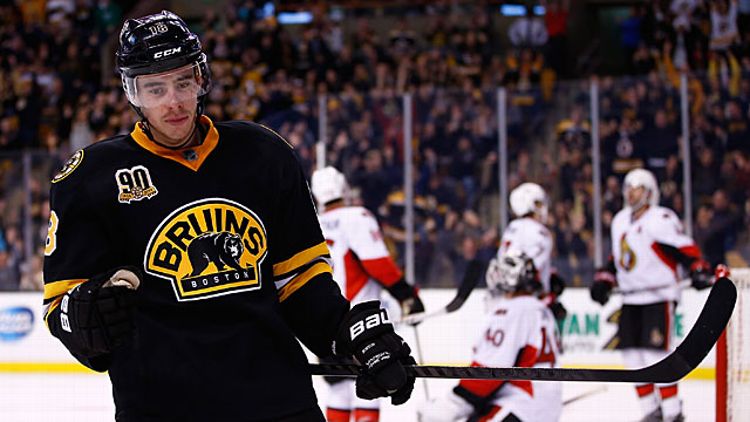 Beasts of the East … Usually

Common sense tells us that it shouldn’t be possible to have a frustrating hot streak, but the Bruins may be trying to prove us wrong. They haven’t lost back-to-back games since the first week of November, and have often looked dominant while winning 12 of their last 17. But that stretch has also included blowout losses to the Canucks and Red Wings, as well as an embarrassing defeat at the hands of the lowly Sabres. When they’re at their best, the Bruins seem close to unstoppable. When they’re not … well, they’re still pretty good, but they’re beatable.

Over the weekend, the Bruins showed off both sides of that coin in a home-and-home series against Ottawa. On Friday, they started slowly but switched gears and overpowered the Senators, riding a four-goal third period to a 5-0 win. Tuukka Rask made 33 saves to earn his league-leading fourth shutout of the season, and Reilly Smith scored a pair.

But the next night in Ottawa, the Bruins turned in an inconsistent effort in a 4-3 loss. Playing without captain Zdeno Chara, a late scratch due to injury, Boston fell behind 3-1 early in the second. Goals from Jarome Iginla and David Warsofsky tied the game, but a late breakdown led to a Bobby Ryan goal that restored Ottawa’s lead. Despite a furious final few minutes, the Bruins couldn’t beat Craig Anderson for an equalizer.

Those occasional Bruins lapses may be the only thing keeping them from running away with the Eastern Conference. With the Penguins hurting, the rest of the Metro still unimpressive, and several presumed Northeast contenders fading badly, it’s hard not to get the sense that the East is shaping up as Boston’s to lose. No team has gone to the Stanley Cup final three times in four years since the 2000-03 Devils, but the Bruins have to be considered a favorite to match that right now.

They’ll have to do it without Dennis Seidenberg, their no. 2 defenseman and an underrated contributor. He’s out for the season after tearing his ACL and MCL in Friday night’s win. That’s a major loss, though it does free up some cap room for a potential trade-deadline shopping spree.

As for the coming week, Boston should be able to keep rolling. It plays three straight at home against teams that are .500 or worse, hosting the Islanders, Predators, and Jets.

Just days before the Winter Classic, the Detroit Red Wings may finally be building some momentum. While Saturday’s 4-3 win in Florida wasn’t exactly an impressive performance — the Panthers controlled the game for long stretches — it still goes into the books as a regulation win. That’s not much, but it’s a result that the Red Wings hadn’t enjoyed in more than three weeks. So … baby steps.

There was bigger news for Detroit this weekend, though. Team captain Henrik Zetterberg, who’d been out with a back injury since December 1, returned to the lineup in Florida and scored a power-play goal in the first. Zetterberg’s absence was a big one — he remains tied for the team lead in scoring despite playing just 29 out of Detroit’s 40 games this season.

Justin Abdelkader was also back in uniform Saturday after missing two weeks with a concussion. The return of two regulars could help the Red Wings get back on track after an ugly stretch earlier in the month during which they lost six straight. They’ve now won three of four and are clinging to one of the East’s two wild-card spots.

The other wild card is owned by their Winter Classic opponent, the Toronto Maple Leafs, who seem to be snapping out of a cold streak of their own (they beat the Sabres and Hurricanes over the weekend). The Leafs and Wings will face off in front of more than 100,000 fans and a national TV audience on New Year’s Day, weather permitting, so any signs of life from either team are appreciated (especially by HBO producers desperate for the chance to build an episode around something more interesting than a water bottle).

Before Wednesday’s showdown, though, the Wings will get a good chance to close out 2013 with another win tonight against the Predators. They’ll want to bank the easy points while they can — after the Classic, they’ll head out on a tough five-game road trip that includes all three California teams.

When we last checked in on the Phoenix Coyotes, they were one of the league’s early-season success stories. But they seemed to be beginning to fade, and we concluded that section with a warning that “It’s not panic time yet … but some mild concern would seem to be in order.” It turns out that may have been optimistic.

The Coyotes have now lost three straight and six of their last seven. In more worrying news, they’ve also cooled off at home, where they started 9-1-2. They’ve won only one of their last six in Glendale, which, thanks to a road-heavy schedule, is a stretch that dates back to mid-November.

The most recent loss came on Saturday in Anaheim, and it actually featured a fairly impressive Phoenix comeback against the league’s hottest team. Trailing 2-0 with five minutes left in the third, the Coyotes rallied to tie it on goals by Martin Hanzal and Mike Ribeiro, the latter with just 44 seconds left in regulation and the Phoenix net empty for an extra attacker. But they had to settle for a single point, as Saku Koivu’s overtime goal gave the Ducks their 10th consecutive win. It was the fifth consecutive Coyotes game to end in overtime or a shootout.

Their cold streak hasn’t cost the Coyotes a playoff spot … yet. They’re still holding on to the West’s eighth and final playoff spot, thanks largely to a five-game losing streak by the ninth-place Minnesota Wild. And yes, this is the point when we’re legally mandated to mention that their 47 points would have them seven up on ninth place if they played in the lowly East.

But the Coyotes’ days as a Western playoff team are numbered if they can’t get things turned around quickly. The good news is that they play three of their next four against sub-.500 teams, so they’re in good shape to hold on to their spot for at least another week.

• The best matchup of a very busy weekend was also its last: the late Sunday nighter between the Ducks and Sharks. San Jose took that one, 3-1, snapping the Ducks’ 10-game win streak and moving back within five points of the division lead. Bracken Kearns, San Jose’s 32-year-old rookie winger, got his first career goal, which I mention mainly because Bracken Kearns is an awesome name.

• The division’s third California powerhouse, the L.A. Kings, lost a tough one to the Predators on Saturday. The Kings had appeared to send it to overtime on a last-minute goal by Jeff Carter, but Mike Fisher got the winner just 10 seconds later on a disputed goal that had to be confirmed by video review.

• The Blues enjoyed a pair of wins over Central rivals, both courtesy of Kevin Shattenkirk. He scored the shootout winner in Saturday’s 6-5 win over Chicago, then added the OT winner in last night’s 3-2 win in Dallas.

• This Marc Methot hip check on Sidney Crosby resulted in a season-ending ACL injury — to Pascal Dupuis. That’s the latest in a long list of injuries suffered by the Penguins, who at their current rate may be just a few games away from icing a lineup of Crosby and 19 walk-ons.

• John Tavares saw his 246-game iron man streak snapped on Saturday because of a lower-body injury. He was back in the lineup and scored a goal in last night’s win over the Wild.

• Speaking of Minnesota, it got Josh Harding back for Sunday night’s game. But Wild star Zach Parise’s foot injury may have taken a turn for the worse, with coach Mike Yeo no longer referring to it as day-to-day. There’s now some concern that the injury could even impact Parise’s Olympic availability.

• Do the New York Rangers have a goaltending controversy? Well, no. Henrik Lundqvist’s recent $59.5 million extension all but assures that. But rookie Cam Talbot’s recent hot streak earned him a third consecutive start on Friday, the first time Lundqvist has sat that long in seven years. Talbot played well but the Rangers lost, 3-2, in Washington. Lundqvist was back in net on Sunday at Tampa Bay, a 4-3 New York win.

• Ilya Bryzgalov’s first start against Philadelphia since being bought out in the summer got off to a good start, as the Oilers scored twice in the opening minutes to build a 2-0 lead. But the Flyers fought back to tie the game late, then earned the win in a shootout.

• The Flyers have now won two straight and are sitting in a playoff spot. And their slumping stars are finally heating up.

• The Blue Jackets dropped a 5-3 decision to the Penguins on Sunday night, snapping a three-game win streak and keeping Columbus two back of the final Metro playoff spot.

• It’s probably not too early to start tracking the race for the first overall pick. The Sabres have earned five points in their last three games, but still hold a four-point lead on the Oilers and five-point lead on the Islanders. A reminder: While Buffalo actually owns New York’s pick from the Thomas Vanek trade, the Isles can choose to defer that part of the deal until 2015 if it ends up being in the top 10.

• Finally, let’s take a moment to enjoy this new wrinkle in goal celebrations. Fist pump? Standard. Fist pump into the goalie’s face? Dustin Byfuglien may be on to something.