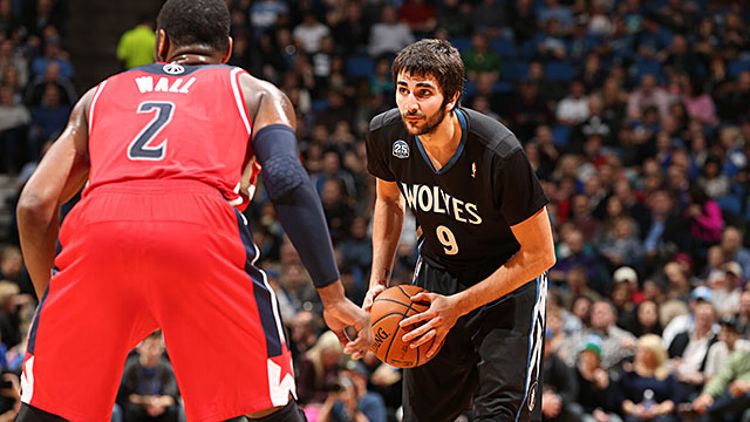 Here’s a hot NBA meme: Ricky Rubio is on pace to have one of the worst shooting seasons in NBA history. That’s right, the guy Shaq once referred to as “the Italian Pete Maravich” is not only Spanish, but he’s not exactly a pistolero on the hardwood either. Rubio’s rough start has been tough to watch, but has it really been historically bad?

One imaginary NBA executive told me that if Picasso were still alive, he’d probably paint like five Guernicas to protest all of the recent bombardments of Rubio. Personally, I believe that is a bit of an exaggeration, but still, here we are.

While it’s plainly apparent that Rubio has been terrible shooting the ball, the numerical specifics behind his troubles are startling. Here’s a crash course on his current shooting numbers:

• As of December 26, out of 152 NBA players who have attempted at least 75 shots inside of eight feet, Rubio ranks 151st in terms of shooting efficiency, converting only 39 percent of his shots. Only Zaza Pachulia has been worse. (BTW, how is that possible? He is giant.) This isn’t exactly a new problem for Rubio, who shot 42 percent in this area last year and only 41 percent in the previous season. He is arguably the worst finisher in the NBA, especially when Austin Rivers is inactive.

• Eighty players had attempted at least 100 midrange shots. Of those 80, Rubio ranks 78th in efficiency. He has made only 31 percent (down from 37 percent last year), which is better than only David Lee (29 percent) and Josh Smith, the clown prince of the ugly jumper. So, yeah, that’s not good either.

Given those abysmal numbers, Rubio’s 3-point percentage, which currently stands at a mediocre 35 percent, is downright heartwarming. In fact, beyond the arc, he’s outshooting many guards with decent reputations, including Kyrie Irving, James Harden, and Chris Paul. Rubio’s problems exist inside the arc, where he rarely gets a “catch and shoot” opportunity. 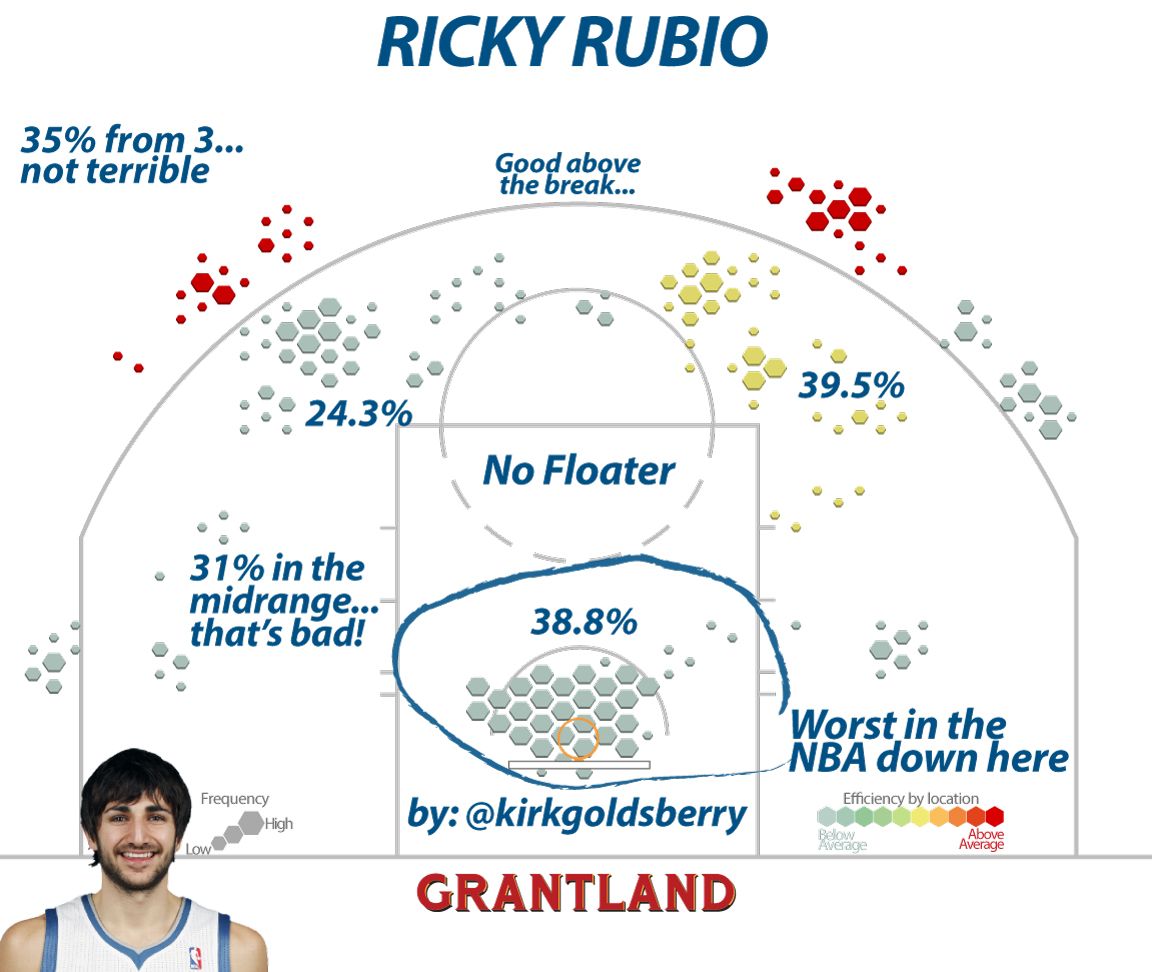 In a nutshell, Rubio is a really bad close-range scorer, a drastically ineffective midrange shooter, and an almost average 3-point shooter (yay?). In sum he is hitting only 35 percent of his shots, which is obviously dreadful. But his numbers this season are only slightly worse than his previous campaigns, so it’s a little surprising to hear people making such a big deal about his stroke. He’s pretty much the same guy with the same shortcomings. What’s killing him now is what has always killed Rubio: an inability to finish close to the basket.

Almost all NBA players pad their overall shooting numbers by making a healthy share of their shots near the hoop, but not Rubio. This year, the league is collectively shooting 55 percent inside eight feet, but Rubio is a full 16 percentage points south of that mark. As a result, there’s no hiding his putrid shooting figures. In a way, to paraphrase John Madden, making your bunnies is great deodorant because, despite our “advanced analytics,” most everybody — including the people designing the contracts and signing the paychecks — still references overall field goal percentage as an acceptable proxy for shooting effectiveness.

Consider this, though: Outside of eight feet, Rubio is shooting better than players like Tim Duncan, Iman Shumpert, Lee, and Victor Oladipo. But since those guys make hay at the rim, they generally dodge the level of FGP-scorn many of us are currently bestowing upon Rubio.

Rubio is having a bad shooting year. But you know what? So are a bunch of his teammates. You have to consider the frozen offensive ecosystem he’s being asked to perform in. Look at what some of his teammates are doing:

• Alexey Shved, a player some have alleged to be a “shooting guard,” is currently shooting 27 percent and has made only eight of his 53 shots away from the basket. That’s 15 percent, you guys.

• Of eight players who have attempted at least 50 corner 3s this season, only one of them has made less than 42 percent of those shots. That would be Corey Brewer, who has made a paltry 28 percent from the corners. While other teams punctuate their successful tactical sequences with high-percentage looks from the corners, Minnesota’s top corner man is flailing.

• Kevin Love, who has demonstrated he can be a solid shooter, has looked awful in the midrange, where he has made just 33 percent of his 131 shots (2 percentage points better than Rubio). For comparison, Luis Scola leads the league with a 54 percent midrange clip, and Dirk Nowitzki is second at 51 percent (both are forwards).

All of this raises the question, are our favorite stats reflections of ability or opportunity? The truth is that they reflect both. I’m not suggesting that Rubio would be a great shooter in another system, but I would argue that the spacing and schemes in his current offense are certainly not helping, and one symptom of a broken NBA offense is tougher, more contested shots — the exact kinds of shots that players in the league’s better offenses seldom have to try (see Marco Belinelli and Gregg Popovich, 2013; Monta Ellis and Rick Carlisle, 2013; Michael Beasley and Erik Spoelstra, 2013). Perhaps Love’s measly midrange efficiency rate says more about the quality of his opportunities in that area than it does about his ability to sink 15-foot jumpers. Maybe Brewer’s depressing corner numbers reveal something that’s more ecological than individualistic in nature.

This isn’t supposed to read like a litany of excuses for Rubio. He’s been bad this year, and as the team’s primary playmaker, much of the burden is on him to create looks for his teammates. That’s obviously not happening, which is particularly troubling since he runs pick-and-rolls with one of the best scoring bigs in the game. That primary action should spark frequent open looks for everyone, and the fact that Minnesota is the worst midrange shooting team in the league has to be considered a disappointment, in terms of both tactics and execution.

Still, when we see awful numbers like these, we have a tendency to confidently assign blame to an individual and deem him inadequate, as if we were talking about pitchers and batters, and not about point guards and centers. Meanwhile, this year — perhaps more than ever — the league is chock-full of evidence that environmental context matters so much in the NBA. Rubio is too young and too freakishly gifted to dismiss.

The critical issue here is player development. Unlike other young point guards like Damian Lillard or Steph Curry, Rubio is not getting better. At a critical stage, when you’re supposed to blossom, Rubio’s growth has stunted. That’s on the organization as much as it’s on the player.