The United States of Carmelo Anthony 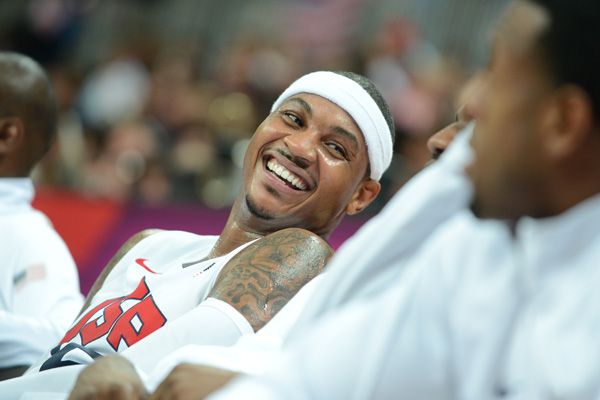 It’s no secret that the Olympics brings out a great deal of temporary American patriotism in even the most staunch opponent of this great country’s sometimes-iffy practices.

I am one of those opponents.

I love America when the Olympics aren’t taking place, but for two weeks every four years, nothing matters more than defeating our international friends, enemies, and frenemies by way of sport. Over this glorious series of summer days, the Budweiser seems to taste a little bit sweeter, my red, white, and blue snapback accentuates my bone structure more generously, and the national anthem becomes the most majestic song that has ever been created. For a sizable percentage of America, there is no more enjoyable time to be an American.

War is a terrible thing.

The Olympics, not so much, but both entities have essentially the same general premise. The country you are from is the only one you care about, and the goal is to defeat everyone else around you. But in the Olympics, thankfully, no one dies. Instead, one person/group prevails, and the ultimate prize is subjecting those who lost, visually and aurally, to your flag and national anthem. The Olympics are not war, but they most certainly are dramatized tales of international submission and dominance.

I bring this up because in the international context, the United States of America is often seen as a bully. In many aspects of country-to-country interactions, this is not a positive characteristic, but when it comes to sport (and outer space?) there are few things that get me giddier than being this bully. Many feel that we lack a certain grace during victory. This was clear yesterday, as the United States men’s basketball team, composed of the best basketball-playing bullies on Earth, squared off against the team from Nigeria.

There was no way we were ever losing this game, but no one thought it would play out the way it did, with Team USA scoring 156 points, 83 more than Nigeria. A few other moderately impressive stats:

This was a massacre and some felt as if the USA poured it on a little too heavily, feeding into the belief that America enjoys embarrassing other lands. While I watched the game, however, I genuinely wanted them to make 200 points and, somehow, for Nigeria to start losing points as the game progressed. Rude, I know, but that’s how I felt. Sadness for these poor men who were being embarrassed on television never entered my cold, American heart, and a day later, I still feel the same way.

While the entire American team was very much on fire for the entire game, the Head Bully in Charge (HBIC) was Carmelo Anthony. His stat line (GIFs courtesy of @heybelinda):

While he might not be the most driven, hard-working, dominant New York Knick to ever play in the Garden, he is securing himself as one of the most legendary Americans to ever represent this country in basketball. When he’s forced to square off against the Boston Celtics, the fire’s not always in his eyes. You throw another country at him, however, and his only goal is to make them ashamed of their ancestry.

In the office where I watched his lights-out performance, the tone of the room began to go from excitement to embarrassment as Melo made shot after shot. After five or six 3s, seeing as his team was already up by 730 points, he could have started passing as to not mock Nigeria’s existence as a nation. But no. This is Carmelo, a defender of America. He just kept shooting — and making — with his reactions to the patriotic zone that he found himself in going from sheer excitement:

To all the salty Knicks fans who see this performance and become sick to their stomachs, knowing that he’ll never do that for New York, take a step back and realize that you have an American hero on your team. It’s hard to be mad at the guy who plays his best in the uniform that doesn’t pay him tens of millions of dollars. The guy just loves America, and by “loving America,” I mean “stunting on non-Americans.”

Anthony should be the hero Gotham deserves, but he’s simply not the one it needs right now. America needs Carmelo. He knows that, and yesterday he showed why.