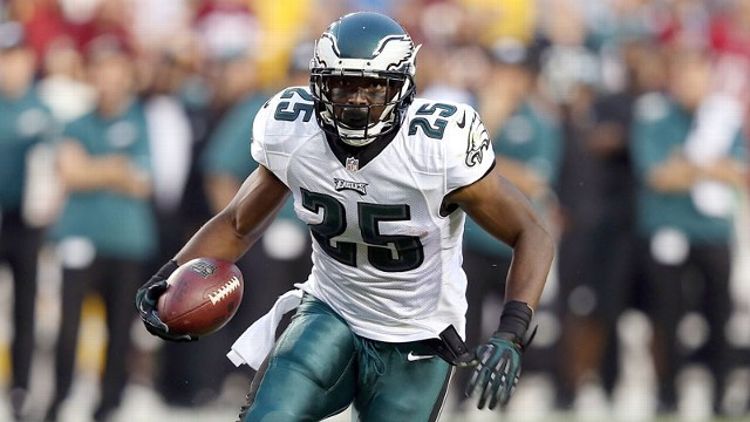 The numbers sit squarely in the shadow of Adrian Peterson now, but two years ago, LeSean McCoy had the best season of any running back in the league. He finished 2011 ranked first in Football Outsiders’ DYAR metric, running for more than 1,300 yards, scoring 17 touchdowns, and regularly doing stuff like this. Last season, those numbers plummeted. McCoy finished 35th in DYAR — wedged between superstar running backs Isaac Redman and Alex Green — and had just two touchdowns all year while also missing four games with a concussion.

McCoy’s own performance may have fallen off a bit from the previous year, but the precipitous drop hardly fell at his feet. The Eagles’ issues along the offensive line began before last season even began, and they never really stopped. All-Pro left tackle Jason Peters missed the entire season after tearing his Achilles, a knee injury cost center Jason Kelce 14 games, right tackle Todd Herremans played only half the season, and former first-round pick Danny Watkins was alternately hurt or awful. In all, the Eagles started nine different offensive linemen, and the result was predictably terrible.

Separating a running back’s performance from that of his offensive line is sometimes difficult, but there are a few elements that are relatively independent for each. If a back is hit for a loss or no gain, generally, that would fall on the offensive line. Last season, only eight running backs were tackled at or behind the line of scrimmage more times than McCoy, according to ESPN Stats & Info. What’s more telling — and more damning for Philadelphia’s offensive line — is the ratio of negative rushes to positive ones. McCoy’s 55 runs of zero or negative yardage came on just 200 carries, meaning those plays made up 27.5 percent of his total rushes. Of the other backs to finish among the top 10 in carries that failed to net positive yardage, only the Colts’ Vick Ballard came even close to that number — 27 percent of 211 rushes. Everyone else was less than 25 percent and carried the ball at least 222 times. For the sake of comparison, Bryce Brown, who had 115 carries for the Eagles offense, was also at 27 percent.

It’s hard to imagine how bad McCoy’s totals would’ve been if he still weren’t regularly leaving defenders in his wake. His 44 broken tackles (as totaled by Football Outsiders) were tied for most in the league with Adrian Peterson. Even with only 834 rushing yards, McCoy was still the type of elusive back he was when he ran all over the league two years ago, and that’s why the return of a healthy offensive line &8212; and the arrival of Chip Kelly — mean that 2013 is a chance to be 2011 Shady all over again. Peters and Kelce are back, Evan Mathis (the Eagles’ one constant last season) remains one of the best guards in the league, and Philadelphia drafted nimble right tackle Lane Johnson fourth overall with the hope that his athleticism would make the former quarterback and tight end a perfect fit for Kelly’s zone-blocking offense.

Through one game, that plan seems to be working out. This is a 16-yard gain from McCoy in the first quarter, with the Eagles lined up with an unbalanced line (as Bill Barnwell mentioned yesterday). The thinking about Johnson actually applies to several members of the Philadelphia offensive line. Kelce, Mathis, and Peters can all move, and right now, it seems Kelly is intent on using his line’s mobility to his advantage.

Here, Johnson loops outside of Peters (lined up as a tight end) while Kelce comes around both right guard Todd Herremans and Peters as a sort of lead blocker for McCoy. Kelce not only finds London Fletcher in the open field — he manages to latch on and eventually put him on the ground. In most defenses, players are taught to read the movements of the offensive linemen as a means of diagnosing plays. By creating movement along their offensive line, the Eagles are creating movement within the defense, and that leaves McCoy with much bigger lanes than a player like him needs to rip off chunks of yardage.

You know, lanes like this one. This is a shot from McCoy’s 34-yard touchdown run in the third quarter. The play again started with an unbalanced line, this time to the left. The blocking here is just a standard zone play to the right, and with Lane Johnson completely turning the backside defensive tackle, McCoy has an easy cutback. For some players, that wouldn’t be enough to score, but after moving back to his left, McCoy uses another jump cut to erase E.J. Biggers from the face of the earth. McCoy doesn’t need much room, and if Kelly can keep using a variety of unique, difficult-to-read blocking schemes to keep the defense on the move, McCoy should be every bit the player we saw two years ago — or something even better.

Every offseason seems to come with its own chic scouting development, and this year, that trend appears to be arm length. Coaches and executives from both the Eagles and the Lions have recently mentioned the importance of long arms for linemen, and for Detroit, defensive linemen specifically. Defensive coordinator Gunther Cunningham even commissioned a study this spring in an effort to look at the correlation between arm length and sack totals, and based on the Lions draft, it looks like there is one.

Now in his third season, Quinn looks like the next player to emerge as a superstar from the 2011 draft class. He had three sacks in the season opener on Sunday, and two of them also included force fumbles. Quinn’s arms are 34 inches long (slightly above average for his 6-foot-4 frame), and here, he uses that length to his advantage. With his left arm, Quinn slaps down Levi Brown’s hands before the left tackle can even make contact.

By knocking Brown’s arms down, Quinn has a free shot with his right arm (fully extended in the photo above) to turn Brown’s shoulders and move right past him on his way to Carson Palmer. Quinn’s size and speed are what made him a top-10 prospect two years ago, but if he can use his hands like this consistently, he’ll be in line for plenty more multi-sack games.

I could get into the details of Wake’s three-sack, six-hit game against Cleveland, but I’m tempted to just let these images speak for themselves. Footage of what Wake did to Mitchell Schwartz on Sunday should come with a parental advisory warning. On the third sack below, the Browns decided the move was to slide their protection away from Wake and use a running back to block the best pure pass rusher in the league. The result is pure carnage. Actually, don’t watch these. It’s that bad.

Text Messages to J.R. Smith: When Have You Ever Shot a Fadeaway 3 for Anyone But Yourself?!

Week 2 Fantasy Football Preview: Stop Trying to Be So Sexy, Would You?