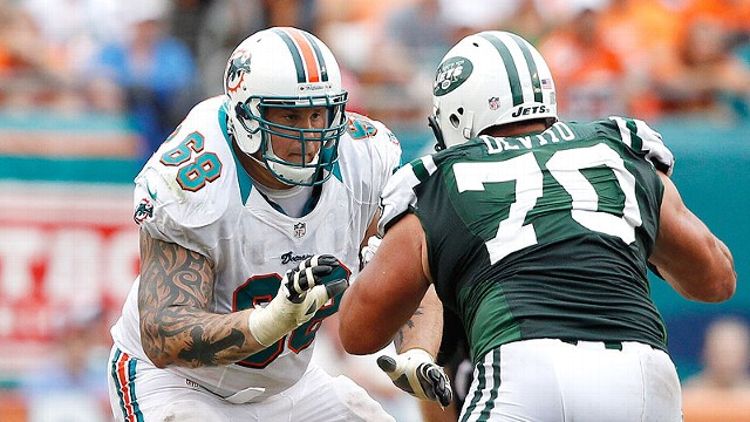 Because not everyone was a Missouri resident with a Rams fan roommate during Incognito’s St. Louis tenure, I’m going to assume there are those not versed in Richie’s checkered history. The quick version is this: As a redshirt sophomore at Nebraska in 2003, Incognito developed a reputation as one of the best — and meanest — linemen in the country. He followed that All–Big 12 season by getting suspended for the 2004 season for a series of off-the-field issues. Incognito attempted to transfer but couldn’t play that year because of NCAA transfer rules. He entered the draft anyway, and despite being a projected interior lineman with character questions who hadn’t played football for a year, still went in the third round. After three and a half seasons of mixed results, yellow laundry, and verbal confrontations with the majority of the St. Louis population, Incognito was let go after a two-personal-foul, one-screaming-match game against Tennessee in December 2009.

That offseason, Incognito landed in Miami, and while his reputation around the league hasn’t changed, some of the other issues have. The league has kept its hands out of Richie’s bank account for much of this year, and this week especially was a reminder of those mauling skills that made teams covet him at the start. Incognito was excellent all day against the Jets, mostly in the run game, where he routinely both blew guys off the ball and got to the second level. But it was one play in the second quarter that really stood out. 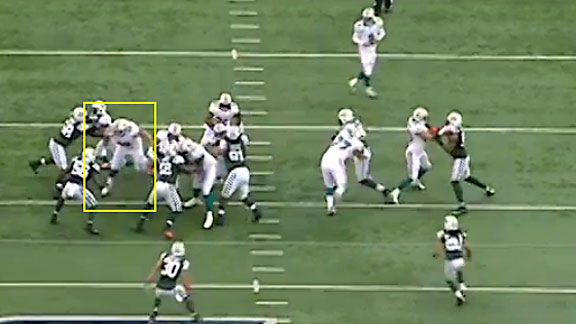 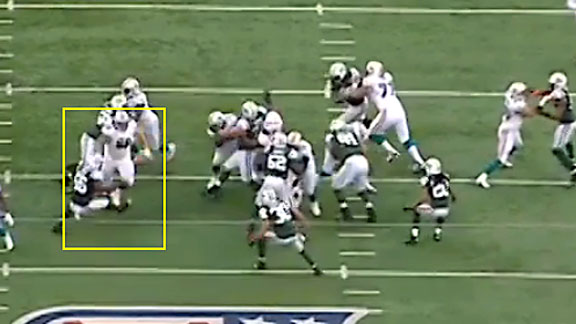 Lined up in the shotgun on first-and-10, the Dolphins run a power play with Incognito leading up the hole for Reggie Bush. The right tackle and right guard are tasked with combo blocking up to David Harris (52), but the initial double team pushes the down lineman far enough into Harris that neither has to come off. This leaves Incognito on the unblocked play-side linebacker Demario Davis, who’s sitting flat-footed in the hole before Incognito lifts him off his feet. 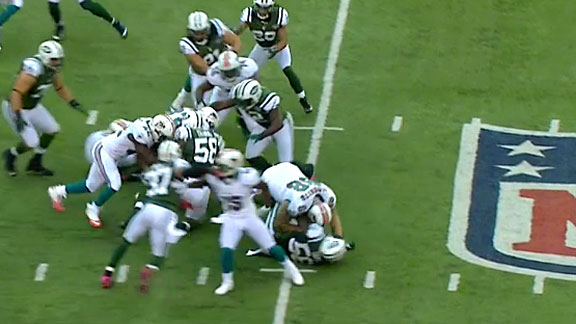 With Davis already on his back, Incognito finishes the block by further burying him into the ground. This is where the line between tough and dirty occasionally gets blurred. Here, finishing a block and truly demoralizing the guy on the other end seems inbounds. 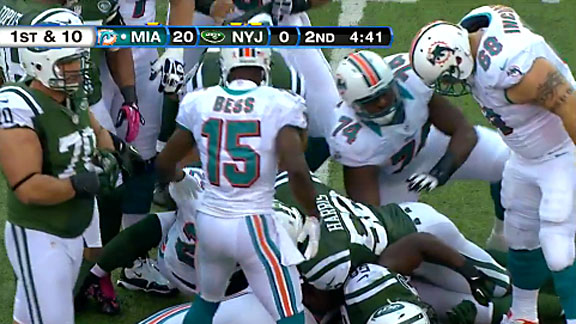 Standing over him screaming probably wasn’t.

New York’s defensive ends usually garner much of the praise, and although most of it is deserved, this week it was a guy in the middle who stood out most. In just his second game back, Canty recorded a sack, a handful of hurries, and a hand in what was the most important play in the early part of the Giants’ win.

With Dallas on its own 34 early in the second quarter, Canty lined up as three-technique tackle on the outside shoulder of the left guard. At the snap, Canty comes off the ball and executes the most basic rush move there is — the club-and-rip. With his outside hand, Canty hits the outside arm of the man tasked with blocking him. This both removes the guard’s hands from Canty’s body and turns the offensive lineman’s shoulders just enough for him to be vulnerable. Then, with his inside arm, Canty rips up the guard’s shoulder pads, giving the offensive lineman little to grab onto and giving Canty both leverage and a path to the quarterback.

Canty gets to Tony Romo just as the he is about to release the ball on a swing pattern to the left flat, and although it’s difficult to tell whether it’s Canty who’s responsible for Romo not seeing Jason Pierre-Paul, the oncoming 300-pound tackle certainly didn’t help.

He hasn’t been the force that New York was hoping for after signing him away from the Cowboys, but having Canty back in the fold gives the Giants’ pass rush yet another player who can win individual battles. The Giants have always presented problems by challenging opponents to choose whom they want to double team while risking one-on-ones elsewhere. That Canty — along with the stable of defensive ends — can exploit those situations when they’re presented is a frightening challenge for opposing offensive lines.

Tampa Bay has been one of the league’s more stout run defenses all year, and although that’s mostly due to Gerald McCoy’s dominance, Michael Bennett has emerged as one of the more underrated players in the league. From his defensive end spot, Bennett has five sacks through seven games — including another of Christian Ponder last week — but he’s also been very tough against the run. 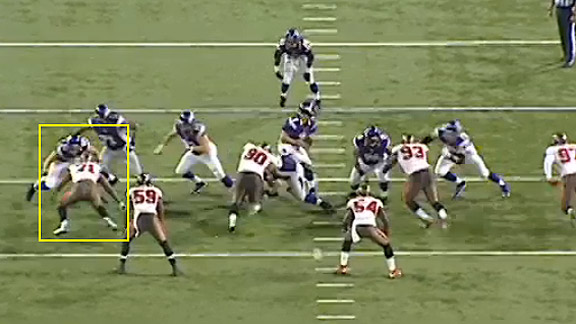 This is a play from the third quarter of Tampa’s game against the Vikings. Bennett’s first step is with his inside foot, and with Kyle Rudolph already lined up to his outside, this puts him at an extreme disadvantage in his task of maintaining outside leverage. 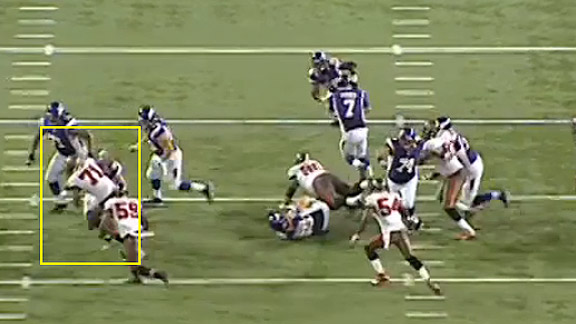 The effort he makes to gain it back is what makes the play so impressive. The moment Bennett feels he’s lost the edge, he tries to swim his right arm back to Rudolph’s outside shoulder. The move works, but the battle doesn’t stop. Rudolph continues to fight to regain outside position as Bennett engages him with his inside shoulder so his outside hand can remain free. 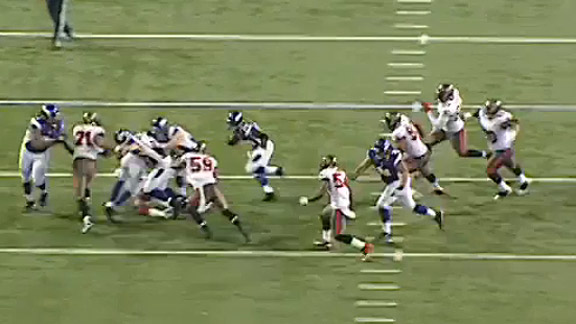 Eventually, Rudolph is picked by another blocker, and Bennett is free to step up and make the tackle.

Most of the time, it’s proper technique that’s rewarded here at the Trenchies, but great effort in its place is just as important. Bennett moves from the left hash all the way to the numbers to make this tackle, and he does it by never conceding outside leverage. It’s a level of effort that’s been evident across Tampa Bay’s defensive line all year, and it’s a big part of what’s made the Bucs competitive.