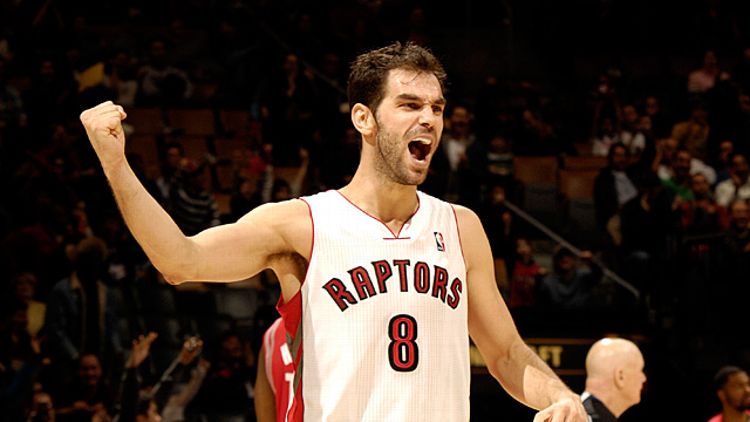 With 61 assists in just six games since taking over for injured starter Kyle Lowry, Jose Calderon has reminded us all that he is one of the NBA’s most underrated playmakers. Perhaps because the Raptors have seemingly been trying to replace him since the beginning of his tenure, it may have gone unnoticed by the average NBA fan what an incredible offensive player Calderon is. The vast majority of his plays never make highlight reels or get mimicked at playgrounds, but they tend to produce winning basketball with the right people around him.

This year, Calderon has gone 6-6 as a starter for a Raptors team that’s 8-19 overall. As Dwane Casey tells it, that’s probably not a coincidence given what Calderon does for them.

“He’ll change things, he’ll make little adjustments within our sets on the fly, a lot like Peyton Manning in a dead-ball situation,” Casey says. “He’s our Peyton Manning. As far as our quarterback on the floor, our eyes and ears, our leader, he’ll call out the opposing team’s plays [and] come back to the bench to give us a heads up.”

Calderon has been such a steadying influence for the Raptors in Lowry’s absence that it’s not a stretch to imagine the Spanish guard will continue to lead the team upon Lowry’s return. “He gives that direction,” Casey explains, “I get mad at him sometimes because he’s got that damn mouthpiece in and it’s hard to understand him sometimes. But when he takes it out, they know what he’s talking about, they know where to go. We have a team full of guys that need that direction as young players in this league.”

Calderon has an invaluable combination of basketball IQ and passing prowess, which generates massive assist totals, like his 17 against the Pistons last night.

Against the Pistons on Wednesday, Calderon simply made the right play, at the right time, every time. Whether it was driving into a gap to create a small shift in the defense or moving his defender away from the primary action to give it more space, a string of indistinct but indispensable skills added up to produce a masterpiece.

“Those subtleties you can’t teach,” Casey explains. “Those subtleties — to create a closeout for someone else — that’s something you work on and hope you pick up but a guy like Jose does it naturally.”

At a position where more and more hyper-athletic guards are taking teams to new heights, Toronto has quietly righted a sinking ship thanks to the nuanced brilliance of a guy who might get picked last at a YMCA pickup game. It’s amazing, when thinking about it in those terms, how Calderon makes it work.

Calderon is on the downward slope of his prime, but he will continue to use his innate ability to help whatever team he’s on, whether it’s the Raptors or a suitor lucky enough to snatch him up before the trade deadline. It may be hard to identify everything Calderon does, but it’s about time we started noticing. Seventeen-assist nights won’t hurt.