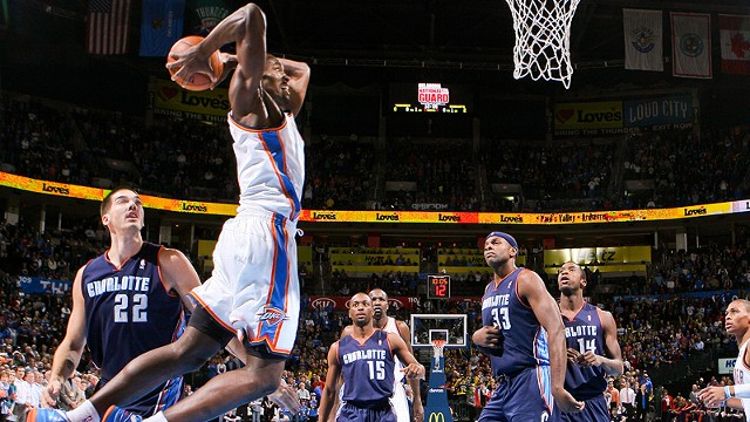 Even if luxury-tax concerns were the no. 1 factor in the Thunder’s decision to trade James Harden earlier than they had to, the deal still amounted to a calculated series of basketball wagers. The most general one: that the Thunder’s current personnel would evolve quickly enough to keep this team in the title hunt, and neck and neck with Miami, even after trading a borderline franchise player in Harden for a less dynamic guy in Kevin Martin.

At the center of those bets, at both ends of the floor, was Serge Ibaka. The Thunder ultimately chose Ibaka over Harden, and though his comparatively cheap price contributed to that choice, so, too, did the uniqueness of Ibaka’s skill set within this roster. Oklahoma City already had two ball-dominant perimeter players. Ibaka stood as the franchise’s best hope for an elite defense — a defense that wouldn’t wilt against powerful teams like the Heat — and an offense that could use a dash of inside-out diversity against the very best defenses.

It’s a good time to check on that evolution, with Oklahoma City nearly a quarter of the way through a season and having just started a nine-game stretch that will include games against Brooklyn, Miami, San Antonio, Atlanta, Indiana, Minnesota, and the Lakers. The evolution is already well in progress, and when you dig deep, you find it’s difficult to separate Ibaka’s growth from that of his teammates, coaching staff, and franchise in general.

In dubbing (somewhat facetiously) Ibaka the league’s most important player before the season, I focused on his shortcomings as a defender — how the Heat’s spread offense exposed how far Ibaka and the rest of the Thunder had to go in their understanding of space and timing, and how dangerous they could be if Ibaka made the leap in that area.

The Thunder this season have adopted a more aggressive defensive stance. They are focused almost maniacally on protecting the paint and the rim area. Their perimeter defenders are in the paint a beat earlier against pick-and-rolls and post-ups, and they are diving in there a step or two farther than they did last season. At times, Thunder defenders are so far from their man it almost looks as if they are playing zone. “It really is our version of a zone,” Nick Collison told Grantland in Brooklyn on Tuesday.

This represents the full-time adoption of a switch the Thunder made midway through the conference finals against San Antonio. Oklahoma City after Game 2 realized they could not stop the Spurs’ pick-and-roll game using their base defense. In Game 3, they began overloading the paint, shutting off driving lanes and pick-and-roll dives at all costs, willing to live with kick-out passes that led to 3-point shots. Some of those shots would be open, but the Thunder were confident they could contest them well enough, given the length and athleticism of their young stars.

On most nights, this does not involve a huge adjustment for Ibaka; it’s more on the wing players to crash the paint hard and rotate out. Ibaka’s job is still to work as an initial line of defense against the pick-and-roll, protect the rim when his man is in the paint, hold his own in the post, and rebound hard. Watch the tape, talk to teammates, and pick the brains of rival personnel folks, and the verdict is pretty much unanimous: Ibaka is better at all this stuff so far this season. He’s more stable against the pick-and-roll, sliding over just enough to contain an opposing point guard, but (usually) not over-helping or lingering too long. His timing on shot blocks is as good as ever, and even when he’s late, he can make up for it with his devastating speed and leaping ability.

He’s not yet a great rebounder or post defender, but he’s working at both. Against the best offensive rebounders, Ibaka will often ignore the rebound altogether, choosing instead to turn away from the rim, plant both his arms into his man’s chest, get himself into a crouched position, and push like hell. He’s staying down more in the post against pump fakes, though he still has a tendency to chase shot blocks and jump himself out of rebounding position. But he’s refining that decision-making process.

“His defensive IQ is starting to pick up,” Kendrick Perkins tells Grantland. “He’s not just a shot-blocker now. He’s even talking to us a lot more. I can’t always understand him, but he’s talking.”

The test will come against power forwards with 3-point range and teams that play small lineups. Brooklyn went small on Tuesday, with Gerald Wallace at power forward, and it had the Thunder slipping into the kind of mass confusion that doomed them against Miami’s shooting brigade. It wasn’t all on Ibaka; the Thunder kept switching a Deron Williams/Jerry Stackhouse pick-and-roll, leaving little Eric Maynor in unfavorable matchups down low, and forcing all kinds of help and scrambling rotations. But the chaos showed that the Thunder, and Ibaka, still haven’t mastered the timing of those scrambles. On this Wallace 3, for instance, Maynor seems to have Stackhouse under control far from the basket, but Ibaka drifts over anyway, leaving Wallace open:

It’s not an awful decision. The Thunder were aiding Maynor all night, and Wallace is a subpar 3-point shooter away from the corners. “You live with a Gerald Wallace 3,” Collison said after the game.

On the very next possession, Ibaka abandoned Wallace up top to help Maynor defend a Stackhouse drive:

Ibaka’s instincts are to protect the paint, and the Thunder’s increased aggression this season has fed those instincts. And, again, it’s Wallace, not Shane Battier from the 2012 Finals. But Ibaka is freelancing outside his assignment here, and it cost the Thunder.

“I’m getting better,” Ibaka said before the game. “It’s only my fourth year. I’m still learning.” The Thunder have been a top-10 defense all season, and they are destroying pick-and-roll plays in which the ball handler or roll man finishes the play, per Synergy Sports. The only category against which they are struggling: spot-up attempts, like the ones Wallace nailed last night.

Good news: They have all season to clean it up — to find the right balance of paint-packing and defending 3s. “Our goal is to protect the paint,” coach Scott Brooks said afterward, “but we have to remember to do a better job on the 3-point arc.” Added Thabo Sefolosha, the team’s perimeter defensive ace: “A lot of it is just about communication.”

Everything’s humming along here, as the Thunder rank no. 2 in points per possession. Ibaka has risen to the challenge of replacing some of Harden’s offense, but he doesn’t get all the credit even for his own individual rise. Ibaka is using 19 percent of Oklahoma City’s possessions with a shot, drawn foul, or turnover, up from about 16 percent last season. He’s allowed to take face-up jumpers out of post-ups this season; he’s 8-of-11 from the post so far, after making just 13 post-up hoops all of last season, per Synergy.

He’s dribbling more, both to score …

… and to make the exact kind of passes the Thunder need more of from him going forward:

Those passes are still relatively rare; Ibaka has only seven assists all season. But you can see the groundwork being laid.

When we think of players taking another step offensively, we usually think in terms of those players “creating their own” shot or getting better off the dribble. Some of that is happening here. But here’s the funny thing: As Ibaka has developed into a higher-usage player, he’s getting more of his baskets via assists, not fewer. A whopping 78.7 percent of his baskets have come via dimes from teammates, up from 67.6 percent last season, per NBA.com.

And this is where Ibaka’s development is linked to that of Russell Westbrook. The Thunder point guard, maligned for his sometimes horrific shot selection, has already assisted on 51 Ibaka baskets this year. He assisted on only 77 Ibaka baskets all of last season, and Harden’s departure does not explain very much of the uptick; Harden assisted on only 16 Ibaka hoops last season, and even if all 16 of those assists were instead credited to Westbrook, he is still handing out assists to Ibaka at a much higher percentage this season.

Anti-Westbrook rage, justified as it is on some nights, has blinded some to his continual improvement as a passer. It’s not just the jump in assists, from 5.5 per game last season to a career-best 8.7 this season; it’s the type of passes Westbrook can throw now. Just a year ago, Westbrook had trouble throwing kick-out passes to players outside of his direct line of vision, and he was only learning to probe defenses in ways that create passing lanes.

He understands the geometry of the floor better now. He can throw inside-out passes to shooters all over the place, even ones directly behind him or diagonally across the court. And he’s better on the pick-and-roll at finding those little drop-off passes to the “other” big man — the one who didn’t set the pick — lurking around the baseline.

All of this has benefited Ibaka, who continues to improve at sliding into the right space at the right time for jumpers and dunks:

The Thunder are even running little pin-downs for Ibaka, as if he were Tim Duncan:

The Thunder overall rank ninth in assist rate after finishing dead last a year ago, and they’ve done that without sacrificing much in the way of free throws — long their bread and butter. Only the Lakers have earned more foul shots per field-goal attempt, and Hack-a-Dwight has a lot to do with that.

Even more remarkable: The Thunder starting lineup is actually functioning offensively! It is officially more watchable than a Tayshaun Prince isolation! The starting five has so far scored 106.7 points per 100 possessions, below the Thunder’s sterling overall mark, but still the equivalent of a top-five scoring rate. Even more shocking: This five has assisted on 63.9 percent of their made baskets, better than the Thunder’s overall mark and just about equal to Boston’s assist rate — the second-highest in the league.

It’s hard to overstate what a massive turnaround this is. The Thunder’s starting five has long been miserable to watch, and last season assisted on just 45.8 percent of baskets — significantly below the Thunder’s miserable (and dead-last) overall number.

It’s early, and the Thunder’s cream-puff schedule is about to get a lot tougher. Brooklyn’s 3-fest on Tuesday exposed again how difficult it is going to be for the Thunder to play “big” — with two of the Collison/Perkins/Ibaka trio — against smaller lineups. That is the exact sort of challenge a Finals rematch against Miami would bring.

But the Thunder have 60-plus games to continue refining things, and the early signs are good.

Chris Brody Was Right: The Wizards Beat the Heat