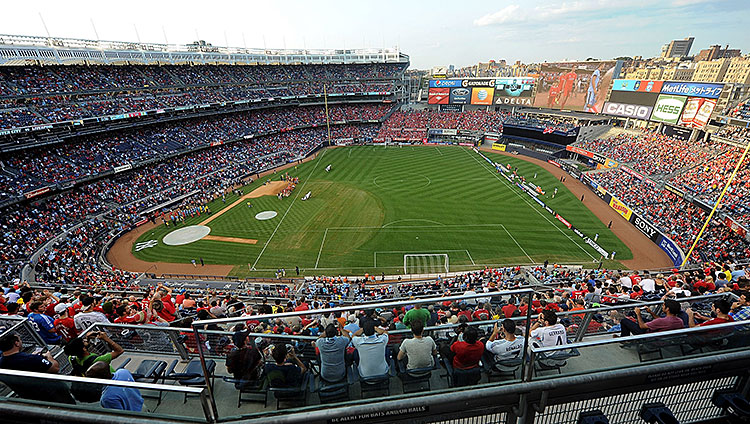 Of the 49,653 fans who watched Manchester City play Liverpool in Yankee Stadium last Wednesday night, about 40,000 of them were wearing red.

“I can’t believe this many people would come out,” a man with a thick cockney accent said behind me at one point.

“Why not? Liverpool are like a major club,” his female companion responded in a matching lilt.

“Well, you know, it’s not Europe,” he answered, befuddled but happy.

This was true. But major (and minor) European clubs, along with their South American and Mexican brethren, have been making North America a summer destination in recent years. And they don’t come on holiday; they come to play.

In this case, the two English Premier League powerhouses were part of the International Champions Cup. Between July 24 and Monday’s championship between Liverpool and Manchester United in Miami, eight European squads played 13 matches across the U.S. and Canada, during what is technically their preseason.

The match between last season’s Premier League winner and runner-up went as these things do. It was something of a cross between an AYSO match (“everybody plays”) and a branding exercise, in which the jerseys looked familiar but …

There were mistakes galore, with cross-field balls pinged well over the touchline, and cheers every time Steven Gerrard touched the ball. (Yankee Stadium loved Gerrard on the night, even though his foil, Frank Lampard, was sitting in the luxury boxes as a new signing of Major League Soccer’s NYCFC who will play at Yankee Stadium next year. Awkward.)

There were also a few moments of sublime soccer, none better than the electric Raheem Sterling’s stunning equalizer:

The 19-year-old English international had been the best player on the field in the second half, and his goal proved to be an exceptional nightcap to a beautiful New York City evening. The tally combined excellent one-touch team play with Sterling’s wonderful individual skill and pace (and, it must be said, some lackluster defending). It was the type of goal you tell your friends you saw in person and find for them on YouTube.

Which is exactly the problem for Major League Soccer.

The USA’s top domestic league continues to fight a perception problem. While the level of play is better than it gets credit for, and continues to improve, it still can’t match the Premier League or any of the big continental leagues. As a result, MLS doesn’t get the benefit of the doubt in the way those leagues do. A poor trap by Gerrard or a sprayed ball from Yaya Touré is a simple mistake; the same transgression by an MLS player functions as an admonishment of the league’s talent deficiency. In an Internet-fueled sports world where narratives are built on GIFs, Sterling’s goal, not any of the many miscues, will be the only moment that gains traction from the match.

Every 90-minute soccer match has its share of dull moments and silly mistakes. One’s opinion of the quality of the match can be dramatically affected by the preconceptions one brings to the proceedings. Tournaments such as the ICC and other Stateside friendlies featuring world powers reinforce partially outdated stereotypes.

Of course, MLS does itself no favors when the L.A. Galaxy, the league’s most visible if not its best squad, goes out and gets obliterated 7-0 by Manchester United in front of 84,362 fans at the Rose Bowl. But what does the team of Robbie Keane and Landon Donovan have to gain from that match other than a payday? Win, and Manchester United is “just in preseason.” Lose, and, well, that’s exactly what was supposed to happen. Bruce Arena, a man whose coaching success has earned him the right to give zero fucks, gleefully does just that. The brutal defeat looks bad for MLS — and it should — but that game is about the 50th most important fixture an already taxed Galaxy squad will play this season. Reality trumps perception, and MLS loses. (Meanwhile, Robin van Persie, who isn’t even the best-paid player on his own team, earns more in a week than all but four Galaxy players make in a season.)

Last week, Brit turned Miami resident Simon Evans made an important point about the ever-present “Euro snobs” in American soccer and why they aren’t going anywhere: “The ‘Saturday morning fans’ are making a rational consumer’s decision to watch the better product and no amount of guilt-tripping, calls for local pride or appeals to patriotism are likely to alter that behavior. But knowing there are thousands of soccer fans out there, waiting to be convinced about MLS, should serve as a fine motivator for the league as it seeks to improve the product on the field.”

It might help to get those potential fans to the field. On Thursday evening, 22 miles from Yankee Stadium, Bayern Munich took on Chivas Guadalajara during the Audi Football Summit at Red Bull Arena. The four-year-old venue is an excellent place to watch a match, blessed with strong sight lines, affordable seats, and a self-contained atmosphere. I tell every sports fan I know in New York to go to at least one Red Bulls game because you hang out on a summer day, drink a couple of beers, and, oh hey, there’s a high-quality soccer match going on as well.

Sure, the tagline could use a polish from MLS’s marketing department, but it’s the game-day experience that needs to become MLS’s calling card. Seattle, Portland, and now Kansas City offer the type of atmosphere any sports fan can enjoy. Many of the other teams, New York included, have beautiful stadiums that are fun and worth attending, especially with a son or daughter who plays youth soccer. If a friendly like Bayern-Chivas — featuring young American star Julian Green — gets fans to go once, perhaps they’ll go to a Red Bulls game, right?

Maybe? The announced crowd of 25,023 on Thursday night, a “sellout” with plenty of open seats, was majority Chivas, minority Bayern, and few neutrals. As with Liverpool-City, it was hard to think that too many people without a rooting interest were there. Bayern manager Pep Guardiola preached to Franck Ribéry about defensive responsibilities in his pressing system; Red Bull Arena preached to the already converted choir. Green did not play.

We’re in this weird place where everyone is scrambling to capture a share of the United States football — sorry, soccer — market. We know it’s growing, but no one knows exactly how to bottle it, so brands — Liverpool, Bayern, Guinness, Audi, Miller Lite, El Jimador, ESPN, Fox, etc. — are spending money and/or attempting to get more exposure to be positioned for the future, when soccer “makes it to the big time.”

Except it has. Soccer in the U.S. will continue to grow with each passing year. But the market is too fractured for any one competition to dominate, no matter how many friendlies Bayern plays. This is MLS’s issue, just as it’s the struggle of the European teams on tour and the U.S. national team. (The popularity of the Mexican national team is the safest bet in American soccer.) Everyone is trying to increase their market share in an inflexible, entrenched system.

On Saturday, Real Madrid and Manchester United played to nearly 110,000 in Ann Arbor, Michigan, the largest crowd ever to watch a soccer match in the U.S. The Telegraph took it as a sign that soccer has arrived on these shores. I’m surprised that author Mark Ogden, in his piece about soccer’s popularity in the United States, didn’t include the fact that the City-Liverpool match in Miami was seen by 1,000 more people than have watched any Yankees game in New York this season. But then again, none of these numbers mean anything. They’re just talking points.

The visiting soccer superpowers are ambivalent about the summer spectacle too. “A lot of these teams felt that travel and pre-season were not conducive to a good season on the field,” Charlie Stillitano, the man responsible for the ICC, told Reuters. “Now it’s about how they can activate their sponsors, how they can sell merchandise, the commercial side goes hand-in-hand with the team, the football.”

No one — the players who risk injury, the managers who lose practice time, the leagues near and far that have nothing to gain — likes these tours except for the accountants. But their wishes are an unstoppable David Beckham free kick.

Back in Yankee Stadium, Sterling’s goal came at the first-base end of the field, late in the match. It should have been the final highlight.

Instead, ICC rules dictate that penalty kicks must decide a winner. (Because America needs someone to be victorious, I suppose? At least the ICC is a tournament; Bayern earned a huge trophy for defeating Chivas in a one-off friendly.) City and Liverpool contrived to miss the first five, with the Reds eventually winning 3-1. After Lucas Leiva beat Joe Hart to clinch victory, his teammates barely celebrated, meandering toward the spot to congratulate the midfielder.

Behind the net, four sections of cheering Liverpool supporters celebrated wildly in the faux-Kop that would soon be left-center once again.