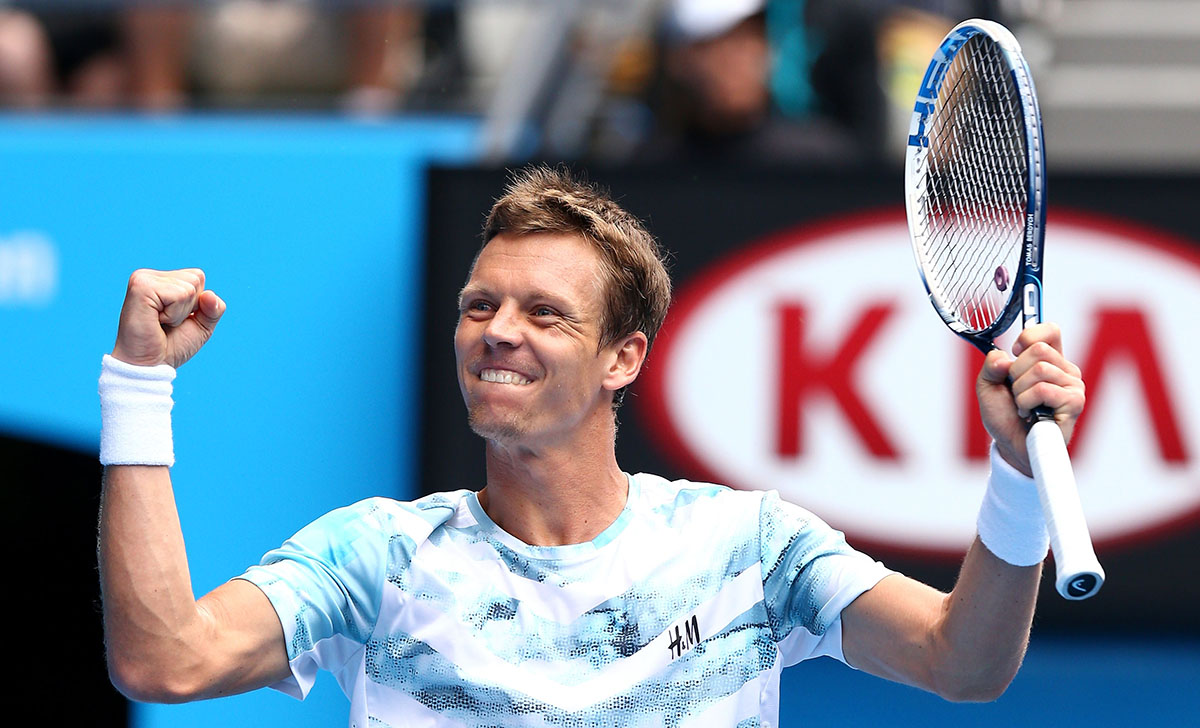 Watching Tomas Berdych and Rafael Nadal play tennis is like watching two men compete against each other while performing two totally different activities. What Nadal does is a blazing mass of energy and passion and force, at once symphonic and chaotic; his movement basically begs for metaphor, though none will ever describe it. He lassoes, he bullfights, he boxes; he is a warrior, a Greek, a Trojan, a Picasso; he is War Horse. In this, his latest serious comeback from injury, I keep thinking of him as a fisherman, casting a hooking harpoon, battling the elements, the sea, himself.

What Tomas Berdych does is play tennis. I happen to like the way Berdych plays tennis, even though most people pretty much laugh in my face when I say that. I am aware that the way he plays tennis is considered boring. Not big-serve, point-over boring; just simple, basic, short-backswing, clean-stroke basic. He does everything well but nothing that catches hearts. (Except mine: Watch him hit a forehand. Watch him hit in slow motion. See how cleanly the ball comes off the strings.) He has admitted how boring he is on the court himself — hence the charming Twitter account, the playful way he interacts with fans. No no, I am not as boring as I look.

One friend told me that Berdych looks like a cyborg. When I relayed this to another friend, he responded, “He doesn’t.” There was a pause. “He looks like a sailboat.”

Well, coming into the quarterfinals yesterday, the fisherman had defeated the sailboat 17 straight times. One more and it would have been the longest streak in the ATP Open era. Instead, Berdych played almost flawless tennis — 46 winners to 21 unforced errors! — and Nadal played listlessly, almost bafflingly badly, for the better part of three sets, and Berdych won, 6-2, 6-0, 7-6 (5).

A boat, anyway, is not such a bad way to think of Berdych. He has a boat’s craftsmanship, efficiency, soundness, smooth lines. He also has, historically, the problems that a boat suggests: the exposure to strong forces and the vast sea, the vulnerability to hidden rocks. He has a new coach now, a new fiancée — perhaps these are helping him read the weather, or perhaps these are anchors. Besides, boats are people too. Just like a fisherman.

It’s almost impossible not to cut directly to conclusions about Nadal. How much longer will he play on hard courts? Is his body just breaking down? It’s easy to focus on the bad stretches at the Australian Open and not to see how much of his best game was on display for other stretches. He has hardly played since the French Open, hampered by injuries; he is missing match-play experience and fitness; if you had told him, at the start of the tournament, that he would make the quarterfinals, he probably would have been pleased with that result. It’s easy to forget, too, that no one has ever lost to someone 18 straight times — let alone a player of Berdych’s caliber. And even so, there was a moment in the tiebreaker when — despite everything — I was convinced, I was certain, that somehow Nadal was still going to win.

Nadal will be 29 in June. He has been punishing his body for more than a decade. It is inevitable that he will lose to players he normally beats. He has been punishing his body for more than a decade. Even yesterday, he had a defensive positioning at the back of the court, a retreat he sometimes makes. But he also assumed posture that seemed more self-protective than tactical. There was speculation that a leg injury limited his range and worried him to distraction. But whatever else it was, there was, as in almost every result, a straightforward explanation: Nadal played passively early, which gave Berdych more confidence to attack more aggressively and to move forward; Berdych attacked Nadal’s stronger side, the forehand, and managed to break it down; Berdych served much better; his powerful groundstrokes sped through the court, while Nadal’s landed short. “Sometimes, almost every time, it is simple: The player who plays better, the player who is able to maintain the better rhythm, the better concentration, play with less mistakes, is the player who has more success,” Nadal said after the match. “And today this player has been Tomas.” This is the most basic way of describing tennis. It is not fishing.

Still, I found myself thinking of fishermen again, and of the days when the best of them go out and wonder whether they’ll come back — and why they keep going out again. Nadal came into tennis and transformed the game, only it was in a way that no one else could do. He is unique; he remains unique. When he was gone for stretches, he left a hole that only he could fill. I guess some people object to his un-tennis-ness, though that seems absurdly unimaginative, a wooden way of looking at the world. I want to live in a world where Nadal keeps playing — keeps questing, keeps battling the elements, hunting for something I can’t quite see — for a long, long time. I want him to show us what tennis can be.

He will be back, and he will be the favorite at the French Open. But even with that loss, this tournament sails on beautifully. The wonder of this sport is that it can accommodate so much. Berdych faces Andy Murray in the semifinals. It could be a terrific match — Murray is playing phenomenally well, and with more creativity and endurance than he’s shown in years. During his matches against Grigor Dimitrov and Nick Kyrgios, his game created a kind of cats-cradle geometry, and he hit a few volleys that, I swear, brought a tear to his mother’s eye. The match will showcase two more contrasting styles. Berdych versus Murray is hardly a changing of the guard. But call me an optimist. I can’t wait for it.