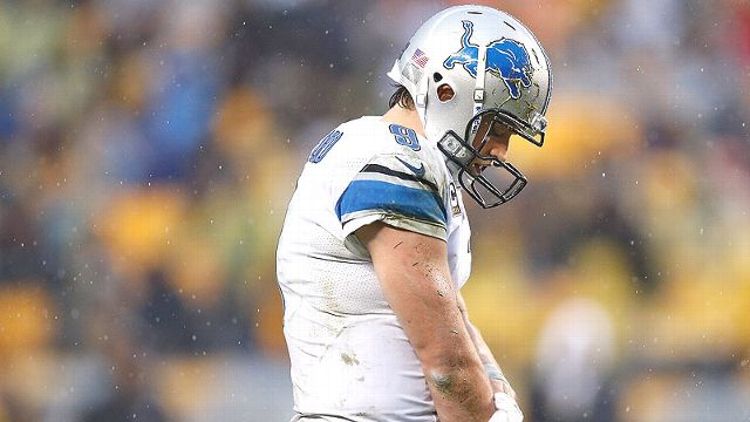 After yesterday, I have all the proof I need. I don’t know what it is about this year, but I’m now convinced that more teams than ever just have no interest in going to the playoffs. The Bengals held off the Browns, but they needed two defensive scores and four turnovers to do it. And I’m starting to believe Andy Dalton is a double agent taking some off the side from the Ravens. Meanwhile, the NFC East is now a jumbled mess, and somehow an Eagles team that couldn’t stop anyone for the first month of the season is 6-5 and looking firmly in control — for now.

Nowhere, though, does the division crown resemble a game of hot potato more than it does in the NFC North. A week ago, the Lions were 6-3, holding a one-game lead, and fresh off a tiebreaker-clinching win over the Bears. It’s a division filled with flawed teams. The Vikings are the Vikings, Chicago is without more than half its defensive starters, and yesterday’s Packers game included the dreaded “Who’s that guy?” montage about their starting quarterback:

Detroit, for plenty of reasons, looked like the team ready to be anointed. After missing a game against the Packers and hobbling around during a half game with the Browns, Calvin Johnson was back. In any other season, Megatron — coming into yesterday averaging 6.6 catches, 113 yards, and a touchdown per game — would be a very real MVP candidate, and that’s without mentioning the “most valuable” points he racked up when we had to watch the Lions play without him in Green Bay.

It’ll always be hard to separate Matthew Stafford’s performance for C.J.’s, but at 25, Stafford really has been playing the best football of his career. His completion percentage was better back in 2011, but every other part of playing the position — not turning over the ball, not taking sacks, the things the really good guys do well — are at an all-time high. Add the Stafford-Johnson connection to Reggie Bush and a Lions defense featuring one superstar and a few other playmakers, and you have a team very well positioned to cruise through a paper-thin second-half schedule (Bucs, Rodgers-less Packers, Eagles, Ravens, Giants, Vikings) on its way to the playoffs.

Then yesterday’s game against the Steelers happened. And the Lions, in every way, reminded us why they’re one of the most infuriating teams in sports.

I honestly couldn’t imagine what it would be like to root for this team, and what happened yesterday afternoon was a perfect and complete example why. After sleepwalking through the first 15 minutes and allowing Antonio Brown to do whatever he wanted and more to their secondary, the Lions put together a second quarter that could be matched by maybe two other teams in the league.

Detroit scored 27 points before halftime, and that stretch included a lost fumble in Pittsburgh territory. Granted, one of those scoring drives lasted one play — a perfect 79-yard strike to Johnson — but mostly, it was a stretch in which the Lions looked like an offensive juggernaut. Take out the deep touchdown to Megatron and Detroit still had six passes of 20 or more yards — in a quarter!

It’s just hard to reconcile how a team capable of that goes scoreless in an entire half against the 27th-ranked defense in the league (by DVOA). A zero-catch half from Calvin Johnson doesn’t help — just another reminder that when teams do take him away, the Lions are left with Brandon Pettigrew and Kris Durham. And Reggie Bush’s relegation to the bench after his second-quarter fumble was also a problem. The Lions struggled to move the ball, and the Steelers didn’t. Ben Roethlisberger was fantastic yesterday, and the eight-minute drive he strung together in the fourth quarter was exactly the sort Pittsburgh needed to keep control of the clock and keep the ball away from Johnson and Stafford.

It was the play that preceded that drive, though, that will go down as the most maddening of the day. Up four with about 13 minutes left, the Lions tried a fake field goal on fourth-and-5 from the Pittsburgh 10, and unsurprisingly, I guess, it ended like this:

Yesterday evening was full of questions about Jim Schwartz’s decision to go for it and whether it cost the Lions a win. My problem with that sequence is a little different. Going for it in that situation is fine (although if you’re going to be that kind of team, you probably should have also gone for it on fourth-and-goal at the 1-yard line a quarter earlier). A first down — and then likely a touchdown — at that point in the game probably ends it.

The maddening part is how they went for it. The Lions’ roster features the most physically dominant receiving threat the world has ever known. In case there’s any confusion, 6-foot-1, 205-pound rookie punter Sam Martin is not him.

I’d imagine that’s the hardest part of being a Lions fan these days. Their stumbles really have nothing to do with talent, or the construction of the roster, or anything like that. For a team so capable of looking like a contender, Detroit is just as capable of stringing together mishaps that are more in line with a team half as good. The good news is that aside from their records, nothing much about the NFC North has changed after yesterday. Detroit still has a well-defined inside track to the playoffs, but at this point, if the Lions keep playing like this I’m not sure it will matter.

College Football, Week 12: Do You Believe in Unlikelihoods?