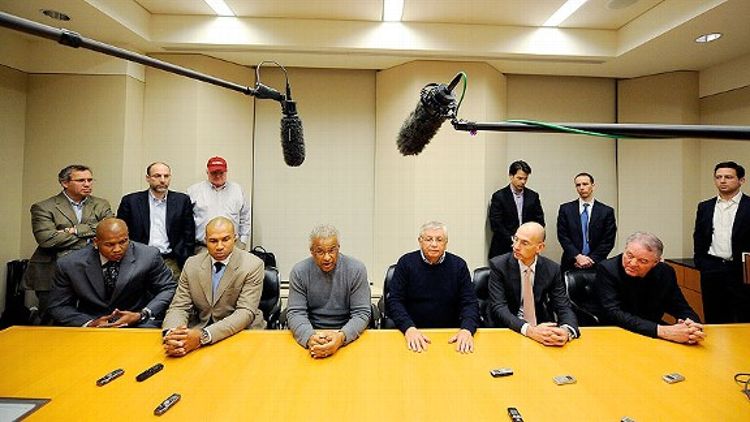 With the worst behind us, let’s talk a little bit about what happened, why it happened, and what it means.

Let’s start with the most basic question. Who won the negotiation?
This was never a question of who would win. We knew it would be the owners — the only question was by how much.

Early on in the negotiations, the owners gave their list of demands to the players, which included elimination of all exceptions to the salary cap and the institution of a truly hard cap, reduction of the players’ share of BRI to 47 percent, a rollback of salaries on all existing contracts, and elimination of guaranteed contracts. Did they expect to get all of that? No, of course not. That was just their opening offer, and the owners pretty quickly took the request for non-guaranteed contracts off the table. But, that opening salvo helped frame the negotiation, and at that point the players were really just fighting to stop the owners from getting everything they asked for.

This isn’t an indictment of Hunter, Fisher, or the NBPA. This is just a fact of life in collective bargaining for NFL, NBA, and NHL players over the past decade and a half. (Major League Baseball has had its own unique collective bargaining history.) As Adrian told Rocky, if you’re a union, “you can’t win.” (Rocky did win, but you get the point.) Take a look at the recent collective bargaining negotiations in these three sports. Since 1994, there have been a handful of work stoppages. All of them have been lockouts. The owners went on the offensive, and the players primarily played defense, trying to hang on to what they have. Compare that to the period before 1994, when all work stoppages were player strikes, with the players generally going on the offensive to fight for significant concessions from the owners.

The U.S. Supreme Court aptly described the collective bargaining process as a “brute contest of economic power somewhat masked by polite manners and voluminous statistics.” (Yes, I just went from Rocky to the Supreme Court in one answer. And I have many leather-bound books.) The owners have the economic power, and they’re using it, while the players are hoping to hang to as much as they can from the previous deal.

So, we knew the players never really had a chance. Did they get a bad deal? Well, that depends on your perspective. Ask the NHL players — they lost an entire season, got 24 percent rollbacks on all contracts, and went from no cap to hard cap. At least the NBA players were able to save the bulk of the season, fight off rollbacks, and hang on to some of the salary cap exceptions.

Did the disclaim-and-sue strategy have any real impact on the negotiations?
We might never know, but I think the answer has to be yes. The disclaim-and-sue strategy was the players’ only real opportunity to go on the offensive rather than merely holding the line to minimize their losses. That’s exactly how NFL players turned the table on the owners in 1987. Their disclaim-and sue strategy proved to be the key to gaining leverage and real free agency rights, something they could not achieve through collective bargaining.

We know what could have happened if the NBA players had seen the strategy through to the end — the season would have gone from suck to blow, and the owners could have been on the hook for billions in antitrust damages — and out billions in revenue. That obviously didn’t happen, and the disclaimer didn’t help the players get the upper hand in the negotiations, but the question is whether it got the players something they would not have been able to achieve through continued collective bargaining.

Apparently, it did. After all, David Stern knew the players were on their heels. By giving the players a “take-it-or-revert-to-the-47 percent BRI” proposal in early November, he dropped the hammer, because he knew the players had no real way of fighting back and were just trying to stop the bleeding.

The situation changed after the players filed their lawsuit and hired the mighty David Boies. They suddenly had the threat of inflicting some (economic) pain on the owners. And that was enough to make the owners move off of some of their demands. The players weren’t able to use the disclaimer as a sword to gain anything new from the owners, but they were able to use it as a shield to limit the damage — something they were struggling to do through continued collective bargaining.

Does this battle have any implications beyond the new CBA?
Yes. Aside from setting a new baseline for the negotiations next time around, this may turn out to be an instance where the players won the battle (well, didn’t completely lose the battle) but lost the war. The NFL-NFLPA and NBA-NBPA battles turned out to be about more than just revenue splits and salary cap exceptions. They were also about the ability of the players to dissolve their union and gain leverage through antitrust law. The owners’ primary argument in the antitrust battle is that the disclaimer is a “sham.” The heart of the sham argument is that the players are not truly choosing to give up their union — instead, they’re choosing to make the union disappear temporarily while they bring an antitrust suit to gain leverage at the bargaining table. And, as soon as the players gain leverage, the union will immediately reappear.

Of course, that sounds suspiciously like what happened here. As soon as the union dissolved and the players filed their lawsuit, Boies started talking “settlement.” And, as soon as the players got the owners to make a few concessions on system issues, they agreed to settle the lawsuit and re-form their union.

So, in the long run, though David Stern might hate to admit it, it might be in the owners’ best long term interest for him to concede that the disclaimer strategy was an effective negotiation tactic, that the antitrust lawsuit did give the players leverage and force the owners to make concessions. It obviously remains to be seen if a court will look back to these events as evidence the next time we head down the disclaimer road (and we’ll be back there at some point), but I have a feeling that the NBA will give the judge a friendly reminder about it.

Was David Boies the key to the successful settlement talks?
No. Boies was brought in because he is one of the top litigators in the country. He was there to argue the intricacies of antitrust and labor law, not the minutiae of BRI, sign-and trade and salary cap exceptions. In fact, Boies probably knows as much about BRI as you know about antitrust law. And, yes, I’m talking to you.

Now that we have a tentative agreement, what has to happen to get us to a new CBA and back to basketball?
There are a number of steps both sides have to take before we can get to a finalized CBA:

It might seem like a lot to accomplish, but as long as each side has the votes they need (which we assume they do), it can get done quickly and the regular season will start on Dec. 25, as currently scheduled. Here’s how the timing played out in the NFL: A deal was reached on July 25; the players notified the court that the antitrust litigation had settled on July 26; training camps began to open on July 27; NFL players vote to re-form their union on July 30; and a new CBA was signed on Aug. 5.

Is it a complicated procedure to re-form the union?
No. In fact, it’s already done. Sure, it was more complex than dissolving the union was (that only entailed a letter from Hunter to Stern), but it was relatively simple, and no formal recertification process was necessary. Instead, the players only needed to get authorization from a simple majority of the players indicating that they wanted the NBPA to represent them in collective bargaining. The NBPA got that Thursday.

It’s worth noting that the NFLPA bristled at the notion that re-forming the union after a disclaimer of interest was a simple matter. In fact, DeMaurice Smith held a press conference to just to make that point, explaining that “the decision for our players, as men, to come back as a union, is going to be a … serious and sober decision that they have to make.”

Why does the union have to re-form before they finish negotiating a new CBA?
Because only a union is empowered to negotiate a collective bargaining agreement on behalf of all the players. Although the terms of the settlement agreement will become part of the eventual CBA, there can be no CBA without a union, and there can be no union until the players vote it back in place.

There’s one other thing to note here. None of the “non-economic” issues that will end up in the CBA — including drug testing, commissioner discipline, and employee benefit and pension plans — can be negotiated until the union re-forms. Of course, they may have made progress on these issues before the union dissolved.

So, the NBA still has some negotiating to do. Nobody expects these issues to stand in the way of a deal, but we still need to wait for the parties to get back to collective bargaining. Until then, we won’t have a CBA and we won’t have an NBA season. I know what you’re thinking — When will then be now? Soon.

Previously from Gabe Feldman
NBA Lockout: The NBA’s Nuclear Winter — Where Do We Go From Here?