The Lions Can’t Seem to Help Themselves 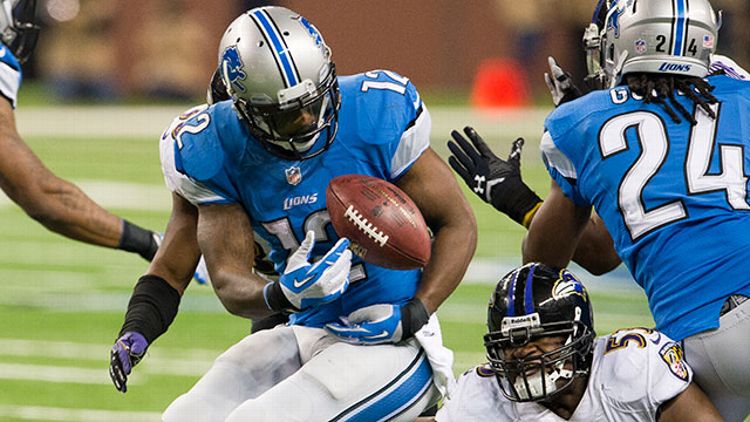 In the end, the Lions were the Lions and the Ravens were the Ravens. A must-win Monday Night Football contest between Detroit and Baltimore saw both teams stay true to form, as the Lions wasted opportunities and played sloppy football before taking a fourth-quarter lead, only to blow it when a desperate Ravens team came up with a huge third-down conversion and a nearly impossible shot from downtown to win the game. It feels like the Ravens are going to keep doing this forever.

Because of their salary structure, the Lions are a team built around several superstars who need to play like superstars for Detroit to succeed. Two of those guys didn’t play up to their abilities on Monday night. Matthew Stafford was wildly inaccurate for most of the evening, missing a number of open receivers with subpar throws and laying out at least two of them with dangerous passes. He finished 18-for-34 for 235 yards with a touchdown and three devastating interceptions, two of which came in the fourth quarter.

Even more disappointingly, Calvin Johnson had one of his worst games of the season in Detroit’s most important contest of 2013. Johnson caught six of the 14 passes thrown to him for a total of 98 yards, but he left three big plays on the field. His two drops came in the first half, but the most significant miscue of the game came on the two-point conversion late in the fourth quarter after Stafford threw a touchdown pass to Joseph Fauria. Johnson’s inability to keep his feet in bounds on a sideline catch left the Lions up 16-15 as opposed to 18-15, and in the process, it opened up the door for a Ravens drive to win it.

That drive didn’t exactly go smoothly, but it got the job done. A hurting Joe Flacco made a huge throw on third down to Jacoby Jones to extend the drive amid heavy pressure from Detroit’s blitz packages. When the drive stalled after a curious decision to run the football on third-and-10 from the Detroit 45-yard line gained just two yards, the Ravens chose to put the game on the foot of its flawless kicker, and Justin Tucker delivered by sneaking a 61-yard field goal just inside the upright. When Stafford threw an interception on the opening play of the ensuing possession, the Ravens had sealed an enormous victory for their playoff hopes.

They might also have sealed the fate of Detroit’s head coach in the process. It’s hard to defend Jim Schwartz these days, given how badly Detroit has blown a golden opportunity in the NFC North. When Aaron Rodgers went down with a broken collarbone in Week 9 and the Lions beat a gimpy Jay Cutler in Week 10, Detroit basically had a clear path to the NFC North title. They were 6-3 with a one-game lead on the Bears and Packers, each of whom were starting backup quarterbacks for the foreseeable future. Since then, the Lions have gone 1-4, with their only victory coming over Matt Flynn on Thanksgiving. They’ve blown second-half leads in each of those four losses, one of the problems that destroyed their 2012 campaign. It’s not that the Lions don’t know how to win. It’s that they know how — and often find a way — to lose.

Schwartz hasn’t really exhibited much of an ability to grow or adapt during his time at the helm, either. He has a consistent problem (or uninterest) with using his timeouts on the defensive side of the ball to try to create positive situations for his offense, and Monday was no exception. When the Ravens drove into Detroit territory and ran that curious third-down play, Baltimore feigned like it was going to go for it on fourth-and-8 before calling timeout with 11 seconds left on the play clock and attempting the game-winning field goal. There was never a move by Schwartz to try to stop the clock earlier and leave as much time on the clock as possible for his offense.

That’s not to say that this was John Harbaugh’s finest day, either. It’s unclear whether the decision to run a draw to set up a field goal of about 60 yards was a playcall from the sideline or a decision made by Flacco at the line, but it was bizarre and played to that ugly definition of a kicker being “inside field goal range.” You can’t argue with the way Tucker performed this season, but even he is going to be better from 45 yards out than he would be from 61. You can’t call a play on third down that you would expect to leave you about a 60-yard field goal attempt just because you think your kicker is capable of pulling it off. Tucker’s game-winning kick came in spite of the play that set it up, not because of it.

Tucker’s kick snuck in the right upright and cleared the crossbar by about three feet. That yard might very well swing the playoff picture in both conferences and materially impact job security.

In the AFC, Baltimore’s win restored its place at the playoff table. Baltimore, not Miami, is now the no. 6 seed in the AFC. The Ravens sit ahead of the Dolphins with both teams at 8-6 because they beat Miami in October in a game when Tucker made four field goals and Miami kicker Caleb Sturgis missed from 57 yards out with 38 seconds to go. The more things change … Baltimore controls its own playoff destiny and would make it in as the AFC North champions by beating the Patriots in Week 16 and Bengals in Week 17.

Where it gets really interesting is that Baltimore-Cincinnati matchup. If Week 16 sees the Dolphins beat the Bills, Week 17 becomes a free-for-all. The Dolphins would then make the playoffs, likely as the no. 6 seed, with a win over the Jets at home. The winner of the Bengals-Ravens game would clinch the AFC North and a home playoff game in the first round, while the loser would almost surely go home empty-handed. Given Miami’s soft AFC East schedule the rest of the way, they have to be considered the favorites to win the no. 6 seed. San Diego would need to win out while both the Dolphins and Bengals lose out to claim the no. 6 seed.

Notice how I said the Dolphins would “likely” be the no. 6 seed with a win in Week 17? They still have a shot at winning the AFC East, and the Patriots, amazingly, could still miss the playoffs. If Miami wins out and the Patriots lose to the Ravens and Bills — often a thorn in New England’s side — the Dolphins would win the AFC East at 10-6, by virtue of having a superior record within the division. If the Ravens win the AFC North and the Bengals beat the Vikings in Week 16, that would leave 10-6 Cincinnati in the playoffs as the no. 6 seed over the Patriots, by virtue of their home win over New England this year. It seems unlikely, of course, but with two weeks in the NFL season to go, it’s amazing that just four teams (Seattle, Denver, Indianapolis, and Kansas City) have clinched playoff spots.

In the NFC, Detroit’s loss opens up the door for the rest of the NFC North. The 8-6 Bears now stand alone atop the division; because they have a dismal 4-6 record in the conference, they’re the no. 4 seed in the NFC standings, with the Eagles (also 8-6, but with a 7-3 conference record) sitting third.

That seems unlikely, as does Schwartz’s future in Detroit. The Lions are locked into the roster they have by virtue of the megacontracts for Stafford, Ndamukong Suh, and Megatron and the mini–spending spree they made the previous offseason, so if they want to make a change, it would be at coach. And given how badly the Lions have fumbled away their big chance of winning the division with Rodgers and Cutler out, it certainly feels like this would be the right time to make a move. The likes of Lovie Smith or even a post-Giants Tom Coughlin would be a good fit as a Schwartz replacement. But that’s later. This was Detroit’s chance, and with its identity as a franchise — and Schwartz’s job — on the line, it came up short yet again.