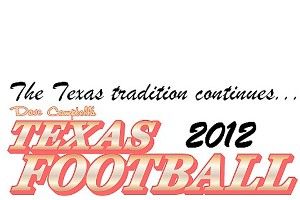 College football season got started last week. Here’s how it happened: I walked downstairs from my Brooklyn apartment and found a 400-page magazine lying in a pile of mail. The magazine was Dave Campbell’s Texas Football. When you get your hands on the new issue of Dave’s — preferably, from the checkout line at Kroger — it’s officially OK to start talking about this stuff.

College-football magazines are supposed to be in decline. A lot of us ditched them for team-based Rivals and 24/7 sites, where all the news is about us. Moreover, college magazines share the same too-few-pages problem as everything else printed on paper. Chunks of Phil Steele’s 2012 College Football Preview are written in the language of a telegram: “PU [Purdue] was -47.3 ypg in the B10 and had 2 net close wins but will likely be favored in 6 gms TY.” Imagine what Grantland Rice would have sounded like writing for Phil’s: “Outlined against a blu, gry Oct sky, the 4 Hrsemn rode x2.”

Dave’s, which has published 53 annual issues, still kills in the Internet age. For one thing, it devotes more than half its pages to high school football. For another thing, those pages are packed with webby — which is to say, sublimely granular — detail. I can flip to page 208 and find the latest on my old alma mater, Paschal High School. Last season, the lowly Panthers went 0-10 (0-7 in district). This year, we’re counting on running back Justin Woodard (98 carries for 331 yards) and wide receiver Ben Noel, who stands 6-foot, weighs 175 pounds, and runs a 4.6 40. “The thing Paschal needs the most right now is size,” Dave’s notes, “especially in this big-bodied district.”

Dave’s has capsules on the Texas power schools (Dallas Skyline, Lake Travis) and capsules on six-man football. The Happy Cowboys are bringing back 13 lettermen this year. The Kress Kangaroos are looking at a just-happy-to-be-here season in their new district. If you find yourself lining up against Jerad Staggs, the 6-foot-4 defensive end for the Ackerly Sands Mustangs, I’m going to pray for you.

If you’re from, say, Louisiana, you may wonder what this has to do with you. Here’s the thing: As Dave’s shows, college football fans are hunting for two things in their media outlets right now. One is data. This typically means data about high school players, since recruiting is to college what the draft is to the NFL. Dave’s is not solely a recruiting magazine. It’s better than that, because it’s about the entire high school panorama. Dave’s is a monument to local data, the latest from Abilene and Pearland and Fort Worth.

The other thing the college fan is hunting for is a sense of community. A “safe space,” he’d call it, if he’d gone in for that liberal bullshit during undergrad. Just as a Rivals message board replicates life in Tuscaloosa, Dave Campbell’s … is a celebration of Texanness — a cultural space delineated by the ads for built-tough Ford Trucks, Nocona Boots, and the Valero Alamo Bowl. When I pick up Dave’s, I think, Damn, man, I’ve come home!