The Intricate Balance of Hedging Your Bet 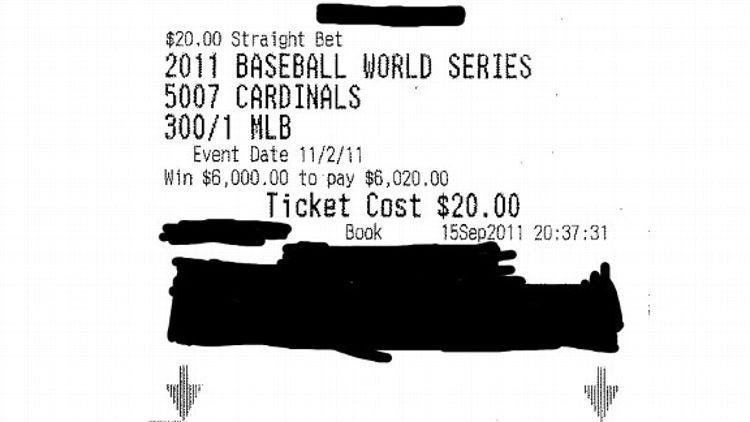 We’re going to discuss a topic this week related to the World Series: Hedging bets. In the middle of September, Grantland reader Nick made a trip to the Bellagio and decided to put $20 on his beloved Cardinals to win the World Series. St. Louis was 4.5 games out of the Wild Card hunt at the time with just 13 games to go, so Nick was provided with hefty odds for backing his faith. At 300/1 (or +30000), Nick’s ticket would pay out a whopping $6,000 if the Cardinals won the World Series. (We’ve blacked out some of the identifying information from the ticket.)

Obviously, a lot’s changed in a month. Before the World Series started, Nick e-mailed us and asked us whether he should hedge his bet — and how he could do it.

There are a variety of times when you might want to hedge a bet. If you have a parlay or a teaser where all but one of your teams have already won their portions of the bet, you might choose to place a new bet on the team that is opposing your final selection on the parlay or teaser, guaranteeing you a victory regardless of who actually wins the final contest. If the team in your parlay wins, you win the parlay and lose on your new bet, but if the team in your parlay loses, you’ll still win the new bet. You might alternately choose to bet a smaller amount on the other side of that final game and partially hedge against your parlay, guaranteeing you a small profit while still leaving the possibility for a big win if your parlay comes in.

For the purposes of this piece, though, we’re going to keep it simple. In this scenario, Nick is going to try and hedge his bet on the Cardinals to win the World Series with a second bet — this time on the Rangers — to also win the World Series. In doing so, Nick will give up some of his profit from the Cardinals ticket if they win, but he’ll also ensure that he collects a payday regardless of who wins the World Series. Since he didn’t ask us to partially hedge, we’re going to find the maximum amount of money Nick could have guaranteed himself before the World Series started. We also want to figure out the EV (expected value) of Nick’s Cardinals ticket as the series started, to see how much he’s giving up by hedging his 300/1 longshot with the Series favorite.

Now, let’s do the math to figure out what Nick’s ticket is really worth. When the Cardinals come through in those 40 percent of series, Nick will win $6,000 in profit. The other 60 percent of the time, though, Nick loses his 20 bucks without getting a dime back. To figure out the expected value of the ticket, you multiply each potential profit or loss by the percentage of the time it’s expected to happen, and then add (or subtract) all the probabilities together. If you’d like to do the math at home, it’s ($6,000 * .4) – (20 * .6). Add that up and you’ll get $2,388. If Nick got to run this World Series bet a million times, that’s our estimate of how much he would make, on average, with this one ticket.

Hedging time. Here’s where it gets tricky. We’ll use our estimate that the Rangers will win 60 percent of the time, but we can only bet on them at the odds available in the market, so our hedging bet will be at the listed price of -158. The more money we bet on the Rangers, though, the less money we’ll get in the case that they lose and our original bet pays out. We need to account for that while also building a model that incorporates the profit we’ll get from betting on the Rangers.

As it turns out, the optimal hedging bet for returning the most guaranteed value, regardless of the winner, would have seen Nick bet $3,686.67 on the Rangers. At -158, he would have made a profit of $2,313.33 if the Rangers won, and received exactly $2,313.33 if the Cardinals won. (Note that subtracting $3,686.67 from $6,000 produces $2,313.33.) His expected value from the pair of tickets is, as you might expect, $2,313.33. Nick is giving up $74.67 in implied value from his first ticket to guarantee himself a hefty profit. Some bettors out there would insist that Nick hold onto his initial ticket and maintain his maximum possible output, but this sure seems like it would be a great opportunity for Nick to hedge his bet and guarantee himself a nice little payday for his intuition.

(All line moves courtesy of vegasinsider.com.)

This is what happens when your offense stinks on ice for most of a Monday Night Football game, guys. Your amount of faith in the Chargers probably depends upon which gambling meme you believe in more: the team coming off of a bye (positive), or the West Coast team playing at 10 a.m. on the road (negative). We’ll test both theories in this space in the weeks to come.

Consequently, this is what happens when you lose to the Jets and their crap offense by 18 points. The same bye vs. 10 a.m. game problem from the Chargers game also applies here for the Broncos. Certainly, this has to be the rare times in history where a team has benched their established veteran quarterback and traded away their top receiver and still seen the line move in their direction during the week.

A universe of people who didn’t believe in the Lions finally got their opportunity to bet against them this week, as their loss to the 49ers coupled with a seemingly-difficult opponent has moved the line by nearly a field goal. The general estimate applied to home field advantage is that playing at home is worth three points; considering the impact the Lions crowd has had in forcing false starts against the Bears and 49ers each of the past two weeks, it seems fair to suggest that they might be worth 3.5 points on their own. Combining that with the current line implies that the Falcons are just as good as the Lions. Does anyone believe that right now?

This line shift was due to the likely absence of Sam Bradford from a high ankle sprain. Now that Bradford appears set to play through the pain, the line might shift back to St. Louis as we inch closer to Sunday.