The Grantland Top Five: Octogenarian Managers, UNC, and the Rest of the Week in Sports and Culture 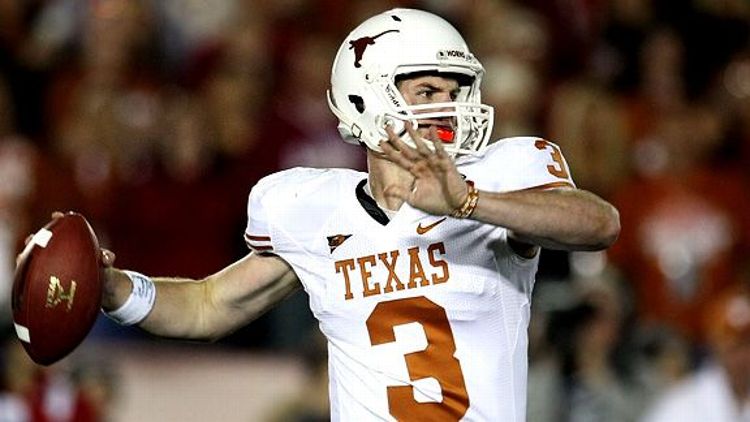 The most emotionally compelling moment in the recent history of college football came on January 7, 2010, in the first quarter of the national championship game, when an 18-year-old freshman quarterback at the University of Texas stepped in for an injured Colt McCoy. Facing these daunting circumstances, Garrett Gilbert did what any of us would have done: He completely freaked out. Never has a quarterback so skillfully recreated the body language of Matt Saracen in Season 1 of Friday Night Lights. Late in the first half, Gilbert botched a shovel pass; Alabama’s ogre of a defensive lineman, Marcell Dareus, snatched the ball out of thin air and then trampled our young would-be hero on the way to the end zone. Texas trailed, 24-6. The outlook could not have been more bleak, both for the Longhorns and for Gilbert’s psychiatric profile. It was elementally human, and it was physically uncomfortable to watch.

The beauty of college football is that it is defined by its flaws. Boise State might have played for a national championship last season if not for the poorly timed breakdown of its kicker; Auburn might not have won the national championship last season if Alabama hadn’t somehow failed to sit on a 24-point lead. For those of us who believe in such things, this is what makes college football the truest of all the national pastimes. Its superiority lies in its imperfection, in the ebbs and flows of youth, and either you grasp that concept or you consider Saturdays nothing more than a four-month long NFL draft preview.

It doesn’t have to be this way, of course. I would wager that more time has been spent debating reform of college football than every major political issue of the past 30 years combined. There are viable ways to implement a playoff system, and there are viable ways to rearrange the power structure, and there are viable ways to avoid exploiting athletes for millions of dollars in revenue while also permitting them to post their own jewelry on eBay. But we seem paralyzed by the very idea of change, and I think, more than anything else, it’s because we have this notion that the abolition of amateurism will alter the fundamental nature of the games themselves — that somehow, if we reform the system, college football will take on the gloss and sheen of the NFL. For the game to retain its raw charm, the system must be equally flawed.

I used to think that was true. I don’t anymore. Even if we pay college athletes a stipend, even if we allow them to pawn merchandise, even if we implement a playoff, those participating in it will make the same mistakes, and occasionally they will redeem themselves from those mistakes (you may recall that Garrett Gilbert threw a pair of second-half touchdown passes and cut the lead to 24-21 before Alabama pulled away in the final minutes). The games will still be elucidated by the fervidness of young minds, because it’s not the nature of the system that makes college football what it is. It’s the nature of the players.

Which, this week, reinforced the maxim that any school which attempts to attain elite status in both football and basketball — especially when their efforts result in nothing more than a Music City Bowl and a treasure trail of alleged NCAA violations — will be (rightfully) punished by the fates.

The hiring of an 80-year-old to helm the Florida Marlins may seem absurd, but at some point we will advance beyond the Early Bird Special jokes and acknowledge the fact that, if we are all living longer than we once did, that there is no reason why an octogenarian cannot succeed in a profession so sedentary that one hardly needs to rise from one’s seat in the dugout to procure a beverage, unwrap a stick of Trident, signal a pitching change, call for a pinch hitter, and access a vat of Maalox.

4. “Great Rock and Roll Pauses,” from Jennifer Egan’s A Visit from the Goon Squad (Anchor Books, 2011)

In which Egan manages to utterly transform PowerPoint from a narcoleptic business tool into a forum for a moving story of youth and yearning and loss. In a way, it is the literary equivalent of Don Draper’s Carousel speech; you will never regard the mundanities of the medium in quite the same way.

If ever Hollywood chooses to greenlight a movie set in 1986 about a teenager suffering from a crisis of confidence and a series of bullying attacks who then becomes a championship swimmer with the aid of a kindly illegal Mexican immigrant, this will be the song that plays over the credits after said teenager wins the 100-meter freestyle by the length of an index finger, then embraces his perky blonde girlfriend. Somewhere in a velvet sitting room, surrounded by cockatoos, Peter Cetera is listening to this track on repeat and thinking, “They finally get me.”

As Bad As It Gets