As Bad As It Gets 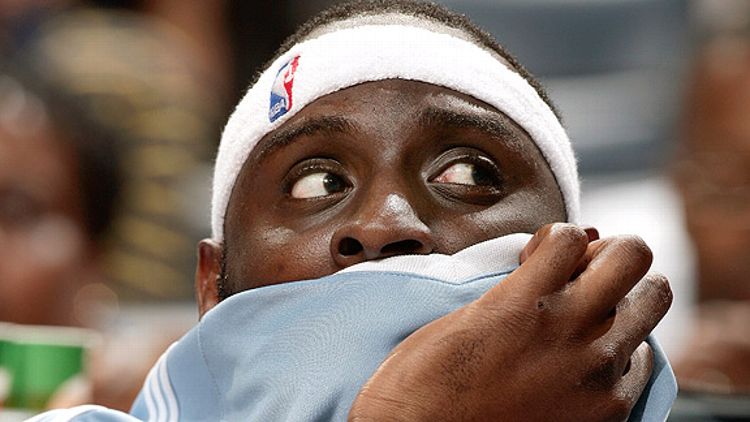 All great drafts are alike; each terrible draft is terrible in its own way. Every June, NBA fans hope to see an incoming class full of Hall of Famers, quality starters, and a high-profile bust who proves just how magical that particular year happened to be. Each bad draft has its own identity, with prospects who find new ways to run afoul of the law, uninspiring players who never fulfill their limited potential, epic busts, or some unholy amalgam of all of the above.

The experts have already christened the 2011 NBA Draft one of the worst ever. Yet while this crop of talent will travel its own special path to the dustbin of history, the ghosts of drafts past can still serve as guides to the unique character of 2011’s disappointments.

Here are the four worst drafts of the lottery era and how the current crop of prospects may suffer similar fates.

4. The 2007 Draft
Hailed at the time as a group that would redefine the NBA power structure, this draft has instead produced one superstar (Kevin Durant), two All-Star-caliber big men (Al Horford and Joakim Noah), and a plethora of busts. Greg Oden’s physical inability to play basketball has made him the most high-profile disappointment, but the draft’s greater legacy has been the failure of top-10 picks like Corey Brewer, Brandan Wright, and Yi Jianlian.

The Yi Jianlian: Questions surrounding Enes Kanter’s NBA readiness prove valid. He spends his entire career living in the shadow of Hedo Turkoglu, the best Turkish player in league history. Luckily, every one of Kanter’s teammates scores an endorsement deal with an Istanbul candy manufacturer.

The Nick Young: The Golden State Warriors draft Jimmer Fredette. His gunner tendencies have a multiplier effect on the gunner tendencies of Stephen Curry and Monta Ellis. Mark Jackson’s attempt to instill a defensive mentality is doomed (as it always was). To make things worse, Jimmer chooses not to grow a poofy mohawk or put scorpions in Ekpe Udoh’s game shoes.

The Spencer Hawes: Klay Thompson becomes a league-wide pariah after giving a speech in support of Michele Bachmann at the 2012 Republican National Convention.

3. The 1990 Draft
At first glance, this draft looks half-decent, with several busts balanced by the presence of nine-time All-Star and Fun Police co-captain Gary Payton. But while 1990 produced six All-Stars, only Payton and (arguably) Derrick Coleman stand out as true stars. History views Tyrone Hill, Jayson Williams, Antonio Davis, and Cedric Ceballos as quality role players. Apart from those successes and a top ten rounded out by Chris Jackson (the future Mahmoud Abdul-Rauf) and Kendall Gill, this draft was a disaster.

The Alec Kessler: Marcus Morris leaves the NBA behind after four middling seasons to fulfill his true calling: orthopedics. He becomes a respected surgeon and eventually performs Greg Oden’s fifth microfracture procedure in 2024.

The Dwayne Schintzius: Concerns about Donatas Motiejunas’s work ethic and passion turn out to be unfounded, but it turns out he also has no talent. Motiejunas grows a stellar mullet to stay relevant. He eventually lands a small role as a zany foreign center in a film about an impassioned fan of the Philadelphia 76ers who becomes the team’s coach, starring Renee Zellweger.

The Derrick Coleman: Derrick Williams proves to be exceedingly lazy, manages to average 20 points and 10 rebounds in the least inspiring way possible, becomes a poster boy for overpaid whiners, embarrasses his country in an overseas tournament, and falls deep into debt following retirement despite making close to $100 million during his career. Oh wait, I just described Derrick Coleman. It’s impossible to be worse than him.

2. The 2006 Draft
Perhaps the dullest draft of the lottery era. Few prospects were highly regarded at the time, and even fewer have panned out. More than half of the first-round picks can be called busts, but that presumes that a bunch of guys never expected to succeed can be termed failures.

How can 2011 be worse?
The Adam Morrison: Jimmer Fredette turns out to be incapable of creating his own shot against NBA defenders and contributes nothing else in any aspect of the game. He is traded to the Heat for a 12-pack of socks and wins only one NBA championship, failing to match Morrison’s star turn on Jimmy Kimmel Live.

The Brandon Roy: Kemba Walker becomes the leader of the resurgent Raptors only to succumb to ankle problems that keep him sidelined for three-quarters of every season. Toronto fans continue to support him by constantly insisting he is just a few months away from a full recovery. Eventually, the controversy surrounding Walker leads to a shocking outcome in the 2014 Canadian elections when he demands his fans install a Molson-drinking moose as prime minister.

The Patrick O’Bryant: Jonas Valanciunas fails miserably and crashes out of the NBA in three years. Scouts note that they somehow missed his propensity to dribble with his palms like an uncoordinated five-year-old boy.

1. The 2000 Draft
Plenty of drafts are bad, but few have disappointed like 2000. The busts didn’t just fail, they failed flamboyantly. Several quality NBA contributors emerged from this group, but not nearly enough to redeem its reputation as the worst draft ever.

How can 2011 be worse?
The Darius Miles and Quentin Richardson Partnership: The Washington Wizards draft Jan Vesely and Donatas Motiejunas. They form an instant bond and profess their friendship by showing jazz hands each time one of them makes a crisp pass. Sadly, their partnership meets a grisly end when Donatas is traded to Houston. Fed up with the NBA, they drive a Yugo off a cliff as a tribute to their favorite movie, Thelma & Louise.

The Etan Thomas: Kawhi Leonard performs slam poetry on off-days. Every piece eschews politics in favor of his musings on the most recent episode of The Bachelor.

The DeShawn Stevenson: Iman Shumpert tattoos the face of Col. George Custer on his neck and starts an unreasonable feud with Kevin Durant despite averaging fewer than five minutes per game.

The Grantland Top Five: Octogenarian Managers, UNC, and the Rest of the Week in Sports and Culture