The Case for Melo to the Hornets 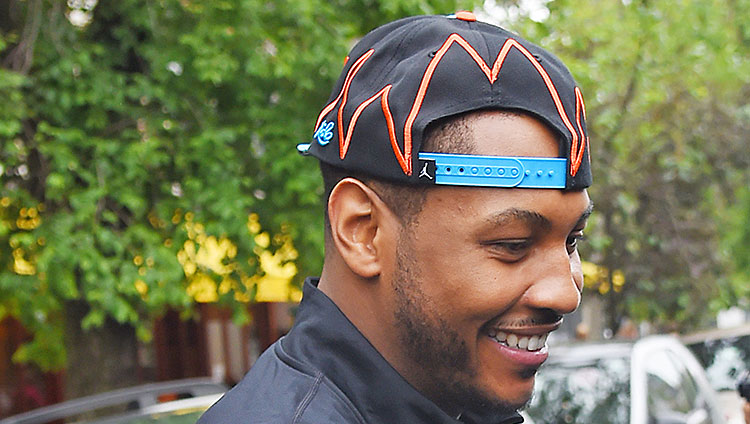 Whatever your views on Carmelo Anthony — as an open wound on defense, cap space–guzzling hangover, or misunderstood, point-scoring virtuoso — it’s undeniable that whichever team signs him this summer will be much better for it in the fall.

The Houston Rockets, Chicago Bulls, and Miami Heat offer glorified complementary roles and legitimate ticker-tape parade anticipation. But joining any of them would drastically alter the lone-star status Anthony’s been used to his entire life. He’d be a hired gun.

Re-signing with the Knicks offers the opportunity for him to finish what he started in New York. But the Knicks have no real tradable assets and no chance at competing for a title for at least one more year.

There is another option, though: How unexpectedly wonderful would it be if Carmelo signed with the Charlotte Hornets? How great would it be to see a superstar join a small-market team with almost no tradition, buck the superteam trend, and still have a fantastic opportunity for on-court success?

And how great would it be if Carmelo, of all people, was the first star in recent memory to take such a plunge? The same guy who forced himself from icy Denver to the bright lights of New York City just four years ago, and was killed by fans and the media for doing so? Something about it feels honorable and fresh. But beyond it being a morality trope, signing with Charlotte makes perfect basketball sense.

The Hornets already have nearly all the necessary pieces in place to maximize the talents of a score-first superstar. They sported a top-10 defense last year. Their two best players are a bolt of lightning at point guard and a maestro in the pivot who operates with the cunning efficiency of a sewing machine.

They just nabbed arguably the draft’s biggest steal with the no. 9 pick (Noah Vonleh, a.k.a. LaMarcus Aldridge 2.0) and one of its best shooters (P.J. Hairston). They have cap flexibility, trade assets, young talent, a coach who has already proven himself where it matters most (defense), and a maniacally competitive owner who likes to spend money and has a decent amount of it lying around.

Best of all, Anthony would be Charlotte’s undisputed no. 1 option — a savior with expectations to succeed but no scorn if he doesn’t. It’d be risky, but not because of the market size. Memphis, Oklahoma City, Indiana, and San Antonio all made the conference finals at least once in the past two years. Large-market behemoths have more money, sure, but for superstars focused on making consistent, deep playoff runs, the size of the city is increasingly irrelevant. This isn’t 1995. Carmelo doesn’t need to play in New York, Los Angeles, or Chicago to be seen on television, whether it be in prime-time games or lavish sneaker commercials.

Joining the Hornets gives Carmelo an opportunity to revitalize professional basketball in an area of the country that adores the sport, while becoming the face of a franchise that sorely needs one.

The Hornets are about $21 million under the salary cap (before factoring in cap holds, empty roster spots, Vonleh, and Hairston). The opening year of Anthony’s max contract would be about $1 million more than that. But the Hornets have some flexibility to clear more room — somebody should be willing to take Gary Neal’s expiring contract off their hands — and I’m not sure where Anthony is on his contract with Jordan Brand, but shoe deals don’t factor into the NBA’s salary cap. Maybe Michael and Carmelo can figure out a “wink-wink” signing bonus, unless that sort of thing is frowned upon, which it probably is.

Regardless, Anthony probably isn’t getting a max deal from anyone, including New York. Focusing on basketball for a second, a move to Charlotte would usher in the next and most worthwhile stage of his career.

The Hornets not only provide immediate supplemental talents like Kemba Walker, Al Jefferson, and Michael Kidd-Gilchrist (guarding the opposing team’s best player so Anthony never has to), but Steve Clifford’s brick-wall defensive system and location in the ailing Eastern Conference are other quality perks. The future is bright, too, especially compared to the relatively short-term title-contention windows found in Miami, Chicago, and Houston.

Vonleh is 18. Kidd-Gilchrist is 20, Cody Zeller is 21, and Walker just turned 24. All will be better players two, three, four years from now than they are today. (Jefferson is about eight months younger than Anthony.)

It’s a win-win for everyone involved (except, per usual, the Knicks), and it would balance the league’s power structure in an interesting way. Hopefully, Carmelo gives it a long look.

Michael Pina (@MichaelVPina) covers the NBA for Sports on Earth, ESPN’s TrueHoop Network, FOX Sports, Bleacher Report, and The Classical. His writing can be found here.