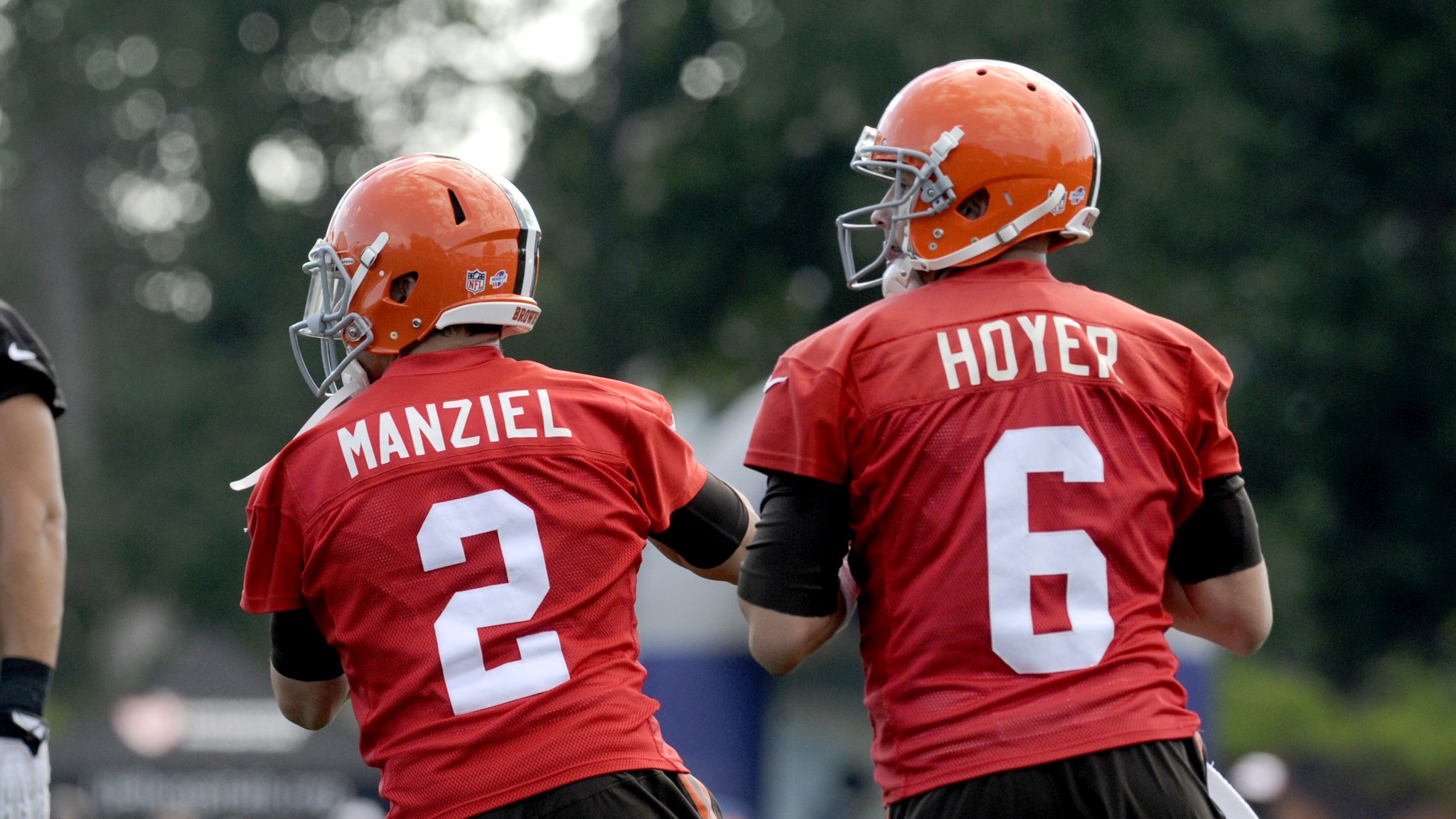 On Tuesday, Mike Pettine and the Browns announced it was too early to make an announcement about their starting quarterback. Then on Wednesday, apparently an extra 24 hours was enough to clarify things. Brian Hoyer is the starter.

“He was the clear leader from the beginning,” Pettine said in a statement. “We’ve maintained all along that if it was close, I would prefer to go with the more experienced player. Brian has done a great job in the meeting rooms and with his teammates on the practice field and in the locker room.”

There’s already been plenty of talk about the quarterback situation for what will probably be a horrible team this year, so I’ll keep this quick. This is actually the best possible scenario for the Browns. And as someone who’s been shamelessly on the Johnny Manziel bandwagon since he was in college, I’m pumped. This is definitely the best move for Johnny Goofball.

There will be people who say stuff like this:

Job was there for the taking for Johnny Manziel. He competed against a guy coming off an ACL who's started 4 games and in a new offense

#Browns playbook was 1st Manziel used. A&M didn't use one. Battle was "Me vs the playbook." Players knew when he struggled to call the play

But those people are missing the point. I’m not even sure I know what that second tweet means, but if the idea is that Manziel hasn’t learned the plays, Browns players have directly contradicted that. As Mike Freeman reported from Cleveland recently:

“None of us have seen the crazy Manziel,” one player said. “All we’ve seen is the professional Manziel.”

“He’s the fastest learner I’ve ever been around,” another said.

“It looks good,” said wide receiver Nate Burleson, when asked if Manziel is grasping the playbook. … “He knows what he’s doing. He’s a rookie, so he’s going to make a couple mistakes here and there. You can’t expect the guy to be perfect. I’m in Year 12 and make a mistake or two. He looks good and he knows the playbook. He’s just in a position where everything is over-exaggerated, but he’s handling it well.”

At the same time, it’s early. Freeman talked to another wideout, Andrew Hawkins, who said, “I don’t care what the job is, you can tell the difference between a 28-year-old and a 21-year-old.” Another player added, “I haven’t seen anything [from Manziel] that makes me go, ‘Wow.’”

That was definitely true Monday night. Aside from the middle finger heard ’round the world — and the reaction when he found out it was on TV, which was even better — he went 2-of-7 for 29 yards in the first half, and he finished 7-of-16 for 65 yards, plus three sacks. Not great.

The thing is, Hoyer was just as awful Monday. He went 2-of-6 for 16 yards working with the first-team offense. The whole game was a reminder that the Browns just aren’t very good. Not right now, at least. That’s why people shouldn’t be freaking out about this news. It never made any sense to start Manziel.

That’s at least three losses, probably five if we’re being real. In that case, why throw a rookie quarterback out there to get destroyed?

Especially this rookie quarterback. Whatever you think of Manziel, millions of people are praying for him to get humbled by the NFL. Everything he does will be scrutinized to death, and every success or failure will come with its own massive overreaction. Making him the starter now would’ve just compounded the problems. It wouldn’t even have to be his fault, but if he’s a rookie who beats out Hoyer and then starts 0-5, suddenly all the critics look smart.

You can look at Wednesday’s decision and say “Johnny Manziel couldn’t win the worst QB race in memory,” but I’m pretty sure the bigger story is about the Browns.

The true Cleveland move here would’ve been to turn the team over to Manziel, ask him to be a savior, and then when it all went to hell by Week 6, turn around and wonder why the Browns always have such horrible luck with quarterbacks. They would have to give Hoyer a shot at that point, benching Manziel, and creating a real setback with his development and confidence. And they’d still have zero chance at the playoffs.

Now? Play Hoyer for those first five games, use the occasional Johnny Football specialty package that we can all watch on RedZone, and then when the inevitable rough start is over, make Manziel the starter in Week 7 with no pressure, and let him play his first two games against the Jaguars and Raiders.

Nobody has any idea whether Manziel will be good, obviously, but at least the Browns are giving him the best shot to succeed. That’s the most amazing part of all this; the team (and city) that always gets things wrong has been playing this perfectly the whole time.

That even goes back to the draft: The Browns went in knowing they wanted Manziel, but instead of taking him with a top-five pick, they traded down to no. 8 to pick up an extra first-rounder next year, then used its pick on the best corner available (Justin Gilbert), the perfect insurance with Joe Haden approaching free agency (Haden has since signed a five-year extension). This wasn’t as exciting as drafting Manziel, but it was smart. Then they traded up in the first round to grab Manziel in the 20s, and everyone went home happy.

Now they have the guy who might be the future. It would be more exciting to just throw him out there and see what happens — the locker room was split 50/50 — but holy shit, they’re being smart again.

That’s where we are right now. LeBron is in Cleveland, the Browns aren’t being idiots, and the world is upside down. It’s crazy enough already. Now we just gotta wait for that Jags game.