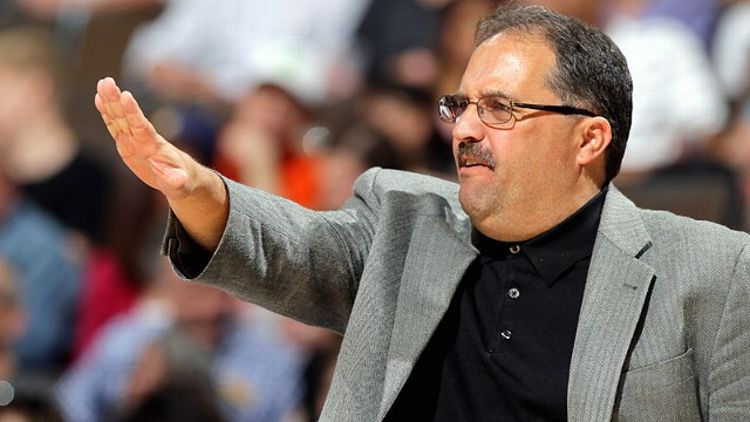 Making adjustments in the playoffs is like any art form, in that inspiration is derived from experience. As coaches navigate the gauntlet of playoff basketball, they rely heavily on the situations they’ve already seen. When a coach makes a brilliant, calculated gamble or keenly alters his team’s tactics on the fly, it’s not a moment of virtuosity taking place on a higher plane. It’s a product of tapping into years of scenarios he’s already come across. Perhaps no coach is better at reflecting on that process than Stan Van Gundy. Widely recognized as one of the best at his craft, Van Gundy has experienced almost everything the NBA postseason has to offer — from the highs of coaching in the NBA Finals to the lows of an untimely first-round exit.

But one element of in-game and game-to-game adjustments that remains steady no matter the scenario, Van Gundy says, is that they’re never all that drastic.

“Barring injuries, it’s just going to stay to the core of who you are,” Van Gundy said. “You’re not going to play the way Denver does during the year and then back up your defense and play from the 3-point line and not get in the passing lanes and stuff. I don’t see those kinds of adjustments from people. It’s much more subtle.”

That first qualifier is one that’s come up several times already in these playoffs. As we’ve seen in Oklahoma City’s recent struggles, an injury to a star player can throw an entire team out of whack. Though a lot changes for those teams, the adjustment doesn’t necessarily have to be widespread. When talking about the Thunder, Van Gundy mentions that while things will no doubt be different, they likely won’t be new. Instead, OKC will have to rely on using previously less-emphasized concepts more frequently.

For those teams without massive injury issues, the changes are less noticeable, and they often focus on accounting for matchups. To find those, Van Gundy says that it’s not so much about making changes to the starting five as it is finding lineup combinations — big or small — that can provide a slight edge at various points against a specific opponent. This seems like another instance of an on-the-fly experiment, but testing different units during the regular season gives coaches a sense of what styles and specific lineups are available to them.

Sometimes, however, swinging a series can be more about the specific impact of inserting one player than figuring out how the pieces fit together. Dwane Casey, the current head coach of the Toronto Raptors, was an assistant with the Dallas Mavericks in 2011 when they made a lineup decision that aided their run to an NBA title.

“Rick [Carlisle] inserting J.J. Barea into the lineup, I thought that was a huge, huge adjustment,” says Casey. “I thought that was a gutsy move on Rick’s part and our part as a staff to do that and it paid great dividends. That was probably the one move that we made that was huge — more than anything else throughout the playoffs.”

For those adjustments that do involve a specific player, Casey says, the challenge is finding a balance between trying to play to his strengths while also attacking an opponent’s weaknesses.

“[If you are] posting up a guy that hasn’t posted up all year as a big part of your offense, then I think you’re hurting your team,” he said.

For a perfect example of this dilemma, we can go back to the Thunder. There have been many calls for head coach Scott Brooks to post up Serge Ibaka whenever a smaller defender, such as James Harden, is matched up with him. The problem is that Ibaka’s strengths lie more in his jump shot than his ability to dismantle opponents on the block, even if he has a huge size advantage. Ideally, the Thunder would find a way to exploit Ibaka’s length within the context of something he already does well — like allowing him to attack a smaller defender on the offensive glass, rather than in the low post.

Though neither coach was commenting on the Ibaka situation specifically, both Casey and Van Gundy agree on the general principle of relying on skills a player’s already proven. “I wouldn’t necessarily take a guy that’s not a post-up guy and post him just because of a size advantage,” says Van Gundy. While coaching in Orlando in the 2009 playoffs, Van Gundy faced a situation similar to the Thunder’s. Dwight Howard had been suspended for a crucial Game 6 against Philadelphia, and Van Gundy elected to use Rashard Lewis more in the post against Sixers rookie Thaddeus Young, who was not yet the defender he is now. The difference with Lewis was that even though he was known more for his outside shooting with the Magic, he’d proven his post skills during his days in Seattle. “It was a big part of his game,” Van Gundy says, “but he just hadn’t gotten the chances with us.”

As much as offensive adjustments are about finding ways to exploit one-on-one matchups, defensive changes in the playoffs are about preventing them — especially for another team’s star. Casey and Van Gundy emphasize the importance of double-teams for the sort of star players teams are likely to encounter as they advance deeper into the postseason. If a team surrenders control of a series to its best player, it likely faces a quick exit. Like with any of these tweaks, though, it becomes about making decisions based on familiar information. If teams try to contain cerebral stars like LeBron James with the same type of defense in every game, it could spell trouble. “If you’re taking the great players and you’re double-teaming the same way from the same places all the time,” Van Gundy says, “those guys are so good that they get into a rhythm.”

Thankfully for coaches, the playoffs create opportunities to develop those changing schemes. Postseason scheduling affords the luxury of consistent practice, something that rarely exists during the regular season. For Van Gundy and NBA coaches like him, that means more time to prepare a complex package of double-teams. And to get wins in the playoffs, it sometimes requires going through every scheme and package developed during that time. “If you have to go through the whole gamut to get a win,” Casey says, “I think you have to do it.”

What’s important to remember, Van Gundy says, is that “it’s still just basketball.” There are times when the combination of lineup choices, play calls, and variations on double-teams can become too complicated. There’s value in being able to see the entire chess board, but the real value for coaches comes in recognizing the ways they’ve seen it before.