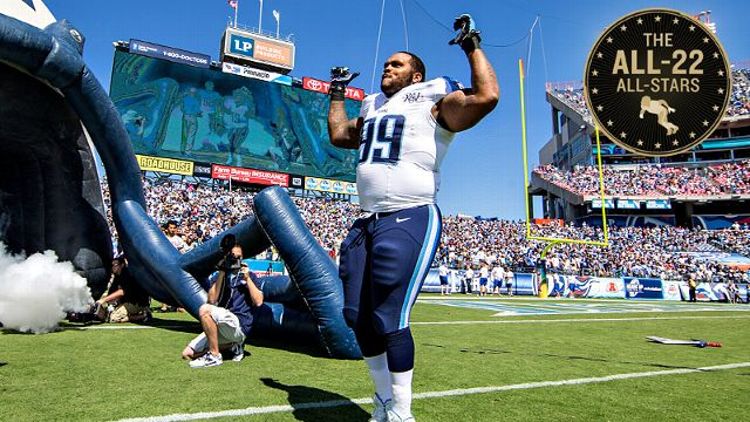 The customary attire at the NFL combine is kinder to some players than others. Jurrell Casey was one of the others.

When Tracy Rocker — then and still the defensive line coach for the Tennessee Titans — saw Casey in the tight-fitting Under Armour getup that served as the weekend’s uniform, he could understand why people had their doubts. The best defensive tackles in football these days don’t just play the part. They look it, too. Geno Atkins is a 73-inch pile of boulders. Gerald McCoy and Ndamukong Suh aren’t far off. Casey was a 6-foot-1, 300-pound USC product for whom stamina and weight were real concerns.

Years as a pro: Three

Game in 25 words or fewer: A stout defensive tackle who makes plays with constant, relentless effort in the run game and has developed into a very effective pass-rusher.

In his final season with the Trojans, Casey led the team in both sacks and tackles for loss on his way to being named team MVP. But after adding middling combine numbers to a résumé already hampered by an unimpressive eye test, he slipped all the way to the third round. Seven defensive tackles heard their names called before Casey was selected by Tennessee in 2011.

Casey arrived at his first training camp as part of an open competition to start at defensive tackle. It wasn’t long before Rocker realized what he’d found. “Everybody looked at his body type, and they thought, ‘Nah, that guy’s not an athlete,’” Rocker says. “No, he’s one hell of an athlete. This guy does some things on this field where it’s like, ‘Whoa, did he really just do that?’ He’s always competing with DBs. He thinks he can play running back. He thinks he can play corner.”

Casey Island might still be a stretch, but after dropping 15 pounds this offseason, Casey entered his third season ready to take on more than he’s ever handled before. With three sacks in five games, he’s been at the center of the Titans’ defensive revival.

Of all the numbers tied to Casey as a draft product, the one that should’ve carried more weight was 67 — his tackle total during his last year at USC. “Relentless” is an overused word in reference to defensive linemen, but few deserve it more than Casey did coming out of college. Only four Trojans had more tackles in 2010, and Casey was the only one with double-digit tackles for loss.

From his first days in the NFL, Casey slid right into his comfortable role as an effective run stopper. Pro defensive tackles typically don’t get anywhere near 65 tackles, but as a rookie, Casey had 40, good for fourth among players at his position. Even more impressive, he did it playing less than 60 percent of the Titans’ snaps.

Casey checks off the requisite boxes for great run defenders: short-area quickness, using his hands, and playing with leverage. What sets him apart is that he does each at an above-average level and combines them with effort that doesn’t cease. This play from last season’s game against the Lions is the type that Casey seems to make over and over. As a rookie, the Titans facilitated that effort and style of play by giving Casey plenty of rest. When the nickel package came onto the field, Casey came off.

This was partially to keep Casey fresh, but it was also indicative of the gap between his talents as a pass-rusher and his ability to stop the run. There were some evaluators who thought Casey would never be able to play the three-technique in a 4-3, that he simply lacked the athleticism and refinement as a pass-rusher to ever have a consistent impact.

During his first season, that was true, and Casey knew it. “I’ve always been decent in the run game, ever since I got into the league,” Casey says. “I already knew that was part of my identity. My main thing was wanting to be a pass-rusher and being able to help out on third downs.” It was an area where Casey focused most of his energy that offseason. But before he could reap the benefits, injuries derailed his sophomore season. It started in the preseason, with an elbow problem. In Week 3, it was his shoulder. Late in the season, it was his ankle. “That’s the hardest thing,” Casey says. “You prepare all camp, all offseason, and you get taken out before the season even gets going. You get down on your season because you’re thinking about injuries more than anything else.”

He played all 16 games, but rarely was he close to full strength. “It went to a point where I was resting him on certain Fridays, just telling him, ‘Hey man, don’t do nothing,’” Rocker says. “We were just trying to get him to the game on Sunday.” The solution was to use third downs as a time to rest his ailing body, and Casey finished with just three sacks after 2.5 his rookie year.

Something had to change. Enduring another season riddled with injuries wasn’t an option. To protect his body, Casey decided it was time to improve it. The Long Beach Poly graduate spent last offseason training in southern California, doing his best to drop some extra weight. There was no change in his diet, Casey says, just “working out like crazy.” By the start of training camp, he’d gone from 315 back down to 300. “Ain’t no doubt his body has changed over the last couple years,” Rocker says. “I don’t think he’ll ever be a Greek god, but he’s definitely made strides.”

The results have been undeniable from the start. In the Titans’ opener against Pittsburgh, Casey tallied two sacks — more than one third of his total from the past two seasons combined. Together, they serve as a perfect example of the different tools he’s developed as a pass-rusher.

This is sack no. 1, from early in the first quarter. There’s nothing pretty about it. Splitting a double-team before slapping the running back aside, Casey looks like Godzilla destroying everything in his path. Early in his career, he says, the Titans’ coaching staff thought a player with Casey’s size should play a more physical style than he did. “They said, ‘You’re too big to be a finesse guy,’” Casey says. These days, Casey obviously has no problem playing with power. His 6-foot-1 frame is actually an advantage in some situations, allowing him to get under taller offensive linemen and just walk them back into the quarterback.

It’s here where those 15 lost pounds come into play. Initially lined up as a one-technique tackle, Casey slants to the outside at the snap before eventually bending back in and dropping Ben Roethlisberger. He gets some help when the left guard moves his focus to Karl Klug, but that initial burst is what’s made this year’s version of Casey one of the better pass-rushing tackles in the league. He’s on pace for a career-best nine sacks, but as is often the case with defensive tackles, his sack numbers tell only part of the story. Casey is playing more than 85 percent of the snaps for the Titans, and with that added workload, he’s constantly collapsing the pocket.

The pass rushing is a bonus, but the best part of a slimmed-down Casey is that he’s now able to make even more of those hustle plays that defined the early part of his career. This is a play from the fourth quarter of the Titans’ (increasingly impressive) blowout win over the Jets. Casey manages to read screen, change direction, and drag Bilal Powell down for no gain all in about two seconds.

It’s the type of subtly athletic play that Casey has been making since he came into the league. The difference now is that he has even more opportunities to make them, along with his newfound talent for bothering opposing quarterbacks. Jurrell Casey may never look as good as his peers, but right now, he belongs right alongside them as one of the most complete defensive tackles in the game.