The 3-Point Evolutions of Evan Turner and Rudy Gay 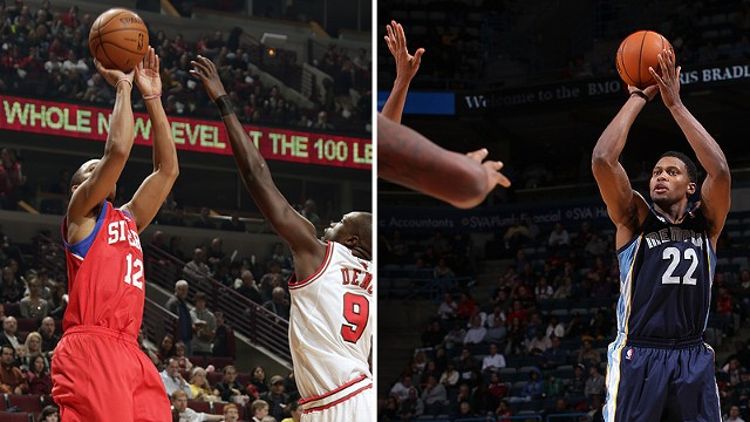 The growing importance of the 3-point shot in today’s NBA is hardly a secret. It has become an essential element for efficient team offense. Not only is the shot itself valuable, but its mere threat creates by far the most precious commodity in the game today — space.

Modern-day defenses, more sophisticated and aggressive than ever before, are built to take away that space. Elite offenses, meanwhile, emphasize ways to create as much of it as possible. With the exception of a select few, like Dwyane Wade, this becomes a struggle for players who struggle with outside shooting.

Because of that, a reliable 3-point shot has become the most critical skill for players to develop. It not only helps maximize earning potential, it allows players to seamlessly fit into nearly any system with positive results. Rudy Gay and Evan Turner are two such players currently reaping the benefits of an offseason spent honing their 3-point strokes.

As a result, both players are on the verge of changing both how they are perceived and their career arcs.

From Bust to Bomber

With the lofty status as the second overall pick in the 2010 draft, Turner was expected to be the cornerstone of a new era for the Sixers, but since shaking David Stern’s hand, he has hampered Philadelphia more than he’s helped.

By the end of last season, it was hard to find any positive value in the young guard’s game, and the numbers backed up that thought. According to 82games.com, the Sixers were 4.9 points per 48 minutes better when Turner wasn’t on the court. His overrated defensive impact was the primary culprit, but Philly’s offense was hardly a well-oiled machine with Turner’s contributions.

Teammates Jrue Holiday and Andre Igoudala functioned better as creators, and Turner’s inability to make a jump shot from, well, anywhere allowed his defender to abandon him without consequence. Those shooting woes, combined with a maddening tendency to hijack possessions with mediocre efficiency, jeopardized his long-term future in the league.

Entering this past offseason, it was obvious that Turner needed to put serious work into his shot to avoid being such a destructive force to the team’s offense. After all, Turner is a passable defender, and players with a modicum of defensive ability who can also provide a reliable threat from deep always have a place in today’s NBA (see the career of Bogans, Keith). The question was, could Turner make that type of improvement?

So far the answer is a resounding “Yes!” as Turner is currently converting 42.3 percent of his 3-point tries. Along with minor improvements in other areas of his game, the Ohio State product has made life much easier for Holiday. And should he ever play for Philadelphia, Andrew Bynum will find it much easier to play alongside Turner if the guard is still making teams pay from deep. Thanks primarily to an improved stroke, the third-year guard’s once-murky future seems much brighter than it was just a few months ago.

The Grizzlies’ Rudy Gay has never had to worry about securing a place in the league, but the sinewy forward struggled to turn his prodigious physical gifts into production worthy of All-Star status and a max contract.

Gay’s first six years went by without a breakthrough, and it seemed as though his flawed shot selection and limited playmaking would keep him stuck in limbo between solid starter and star. There was even less hope for his improvement when Marc Gasol and Zach Randolph emerged as one of the league’s best front lines, taking away the areas of operation that seemed to suit Gay best.

In actuality, it was the focus placed on the Gasol-Randolph duo inside that allowed Gay an opportunity to expand his game to new areas, particularly out to the 3-point line. After a rough start to the season, the 6-foot-9 wing is 17-of-34 from deep over the last 10 games and 39.6 percent overall, a surprising level of consistency for a player of Gay’s ilk.

For years Gay has been something of a slasher/scorer type — a poor man’s Carmelo Anthony in a sense — whose shot diet consisted of mid-range isolations and attacks on the rim. The problem with that type of play is that there isn’t much room for it in Memphis. Because three out of the other four starters are unable to spread the floor, Gay loses the valuable space he needs to operate in the manner he was accustomed to.

As Gay gains more confidence from the perimeter, it could be time for him to permanently adopt his current on-court identity. By assuming the mind-set of a shooter rather than a scorer, he could dramatically affect the efficiency of his game while providing a much better complement to the current makeup of the Grizzlies’ roster. Gay’s combination of length, fluidity, and skill is matched only by Kevin Durant, a superstar who can provide spacing for lineups that would otherwise be without it.

This transition would require Gay to focus on eliminating his tendency to float on the perimeter without a purpose. Rather than merely settling for the obvious looks that come his way, Gay would instead have to “hunt” shots from 3-point territory; the most effective shooters in the league are always actively focused on moving to spots that allow for quick catch-and-shoot opportunities.

Right now, Gay averages only 3.2 attempts per game, despite his robust shooting numbers. With a different mind-set, and the way Gasol and Randolph pull help defenders into the paint, Gay can — and perhaps should — almost double that number to maximize his production.

Such an extreme departure from the player Gay has been for his entire career won’t come easy, but by embracing change, Gay could boost both his own career and the Grizzlies’ championship aspirations.