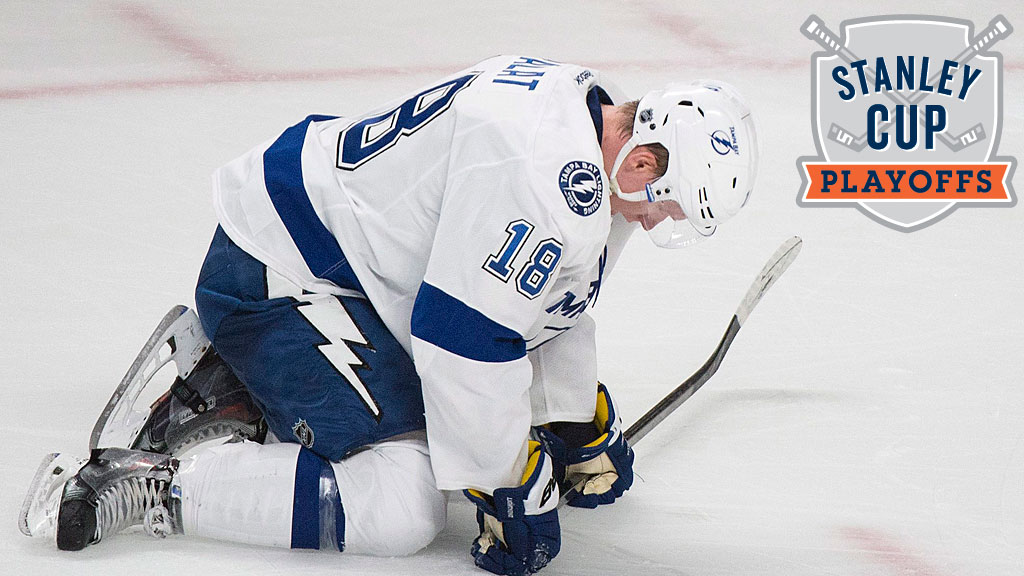 You never want to be the reality show contestant who gets sent home in the very first episode. After all that buildup — the auditions and the photo shoots, the well-wishes from all your friends and family, the commercials, and the wacky housing situation — you can’t help but start believing, Hey, maybe I could be the one to win this. Until suddenly, next thing you know, you’re nothing but that weird ghost haunting the opening credits week after week. You never even got the chance to dramatically overcome your fear of heights or get into an infamous “don’t you point your finger at me!” feud.

Sixteen teams stood before us in the 2014 Stanley Cup playoffs, but only 15 teams remain. Sorry, Tampa Bay Lightning, but it’s time to hit the showers. Sports are the O.G. reality TV, and the playoffs are the closest thing to sweeps week. But being swept in the first round is not the ideal way to allocate your 15 minutes of fame.

“It’s been well documented what this team has gone through this year,” said Tampa Bay coach Jon Cooper, as camera-friendly a guy as there is in this business. (A former lawyer and Most Interesting Man in Hockey, he’s well at ease with the media; earlier this week, he playfully wedged his way into a scrum of reporters interviewing Steven Stamkos, wielding a water bottle as a microphone.) “I don’t want to throw any cliché words out there, but it’s been a transition year for us, in an unbelievably positive way.”

That’s what they always say. But Cooper had a point: At the beginning of the season, it wasn’t clear Tampa Bay would make the playoffs, and that was before Stamkos shattered his leg against a goalpost, an injury that forced him to miss most of the year and the Olympics. Speaking of the Olympics, this was also before captain Martin St. Louis, initially snubbed for Team Canada by his GM, Steve Yzerman, made it known he wanted to be traded. But buoyed by a cast of young players who had largely played with one another (and under Cooper) in the minor leagues until pretty recently, the Lightning finished second in their division and drew the Montreal Canadiens in the postseason.

It all happened so fast after that. Part of this was because of scheduling quirks: Tampa Bay and Montreal had their fourth game Tuesday night, while the Rangers and Flyers aren’t set to play theirs until Friday. The Canadiens won 5-4 in overtime in a back-and-forth Game 1 and took Game 2, 4-1. But the true nail in the coffin came in the third game, after Tampa Bay scored what appeared to be the go-ahead goal, only to have it disallowed for goaltender interference. (Montreal gained the lead shortly after.) And despite a spirited comeback in Game 4 in which the Lightning rallied to tie it at 3 in the third period, they were eliminated in gutting fashion. The Canadiens’ game-winning power-play goal came with less than a minute to play in regulation.

“We went down swinging,” Cooper said.

Cooper noted that 12 of his players made playoff debuts this season. Throughout the year, it was their performances that helped keep the Lightning on track. But sometimes the trait that makes you a compelling character can also be your undoing.

Tampa Bay’s Game 4 comeback included goals by Ondrej Palat and Tyler Johnson, who on Wednesday were both named Calder Trophy finalists. But Montreal scored on a defensive error by Mark Barberio that left zero people covering the front of the net, and the Canadiens’ game-winning goal came with Cedric Paquette in the penalty box. (Of all the rookies, there was one Cooper may have erred in not turning to earlier: goalie Kristers Gudlevskis, who nearly led a Latvian upset over Canada in the Sochi Games. With starter Ben Bishop out with an injury, the Lightning turned to beleaguered backup Anders Lindback for the majority of the playoffs. He was pulled Tuesday after allowing three goals on 20 shots.)

We’ll have more on Montreal as the postseason continues, but for now it holds that prized immunity that results from a series sweep. The Canadiens could play the Boston Bruins in the second round, which will certainly make for some dramatic televised fodder. (The Bruins beat the Red Wings, 3-0, on Tuesday, and hold a 2-1 lead in their series with Detroit.) The Lightning, meanwhile, will have to stomach seeing themselves in playoff montages on TV promos for the next month and a half, the forgotten first footnote in someone else’s success story.