‘Suck It, Phaneuf!’ (And Other Great NHL Moments From January) 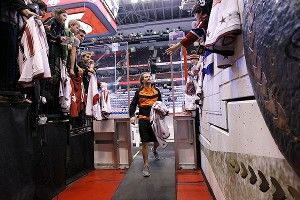 Hockey’s Three Stars of Comedy is a monthly feature that will recognize the three NHL personalities from around the league who produced the most comedic fodder for fans. It will appear at the end of every month (we’re close enough this time, right?) unless it hits somebody in the head and gets suspended, at which point it will stay home and sulk.

Corey Perry, Patrick Kane, and Carey Price, All-Stars
For the last few years, the NHL has basically decided that anything goes during the skills competition breakaway event. Props, costumes, special effects — you name it. Each year, that leads to a few players trying to get creative.

Corey Perry’s mini-stick and Patrick Kane’s Superman routine (with bonus exploding puck encore) both deserve credit for effort, even if Superman didn’t wear glasses and a cape at the same time. But the real star of the show was goaltender Carey Price, who had a bang-on Vesa Toskala impression going right up until he ruined it by making the save.

Tim Thomas, Boston Bruins
On merit, Tim Thomas should have been one of this month’s stars. News of his refusal to attend the White House ceremony for the Stanley Cup champion Bruins, and his creepy Facebook mini-manifesto explaining the decision, resulted in more one-liners than any NHL news all season. But that’s the problem — we’re already sick of it. It happened a few days ago, and every possible joke has already been made. You ruin everything, Twitter. Or, as Thomas would put it: You RUIN Everything, twitteR.

John P. McConnell, Columbus Blue Jackets
McConnell is the Blue Jackets’ majority owner, and last week, he sent a letter to fans apologizing for their total disaster of a season and pledging that the franchise would be getting right on that whole “build a team that wins consistently and competes for the Stanley Cup” thing any day now.

How would Columbus go about doing that? He didn’t say, but keep in mind, this is the same team that’s been rumored to be considering John Ferguson Jr. as its next general manager. Ferguson (or “JFJ,” as he’s known among Maple Leaf fans who are trying not to swear in front of their children) would be a great choice, since he has extensive experience with hopelessly terrible teams. That’s usually at the end of his stint instead of the beginning, of course, but still. Experience is experience.

Brad Marchand, Boston Bruins
Early in January, the Bruins faced the Canucks in a Stanley Cup rematch. It didn’t take long for the bad blood to boil over. There were fights, big hits, and an answer to the age-old question: “How many Canucks does it take to win a fight with Shawn Thornton?” (Answer: more than six, apparently.)

But the lowest moment, literally, came during the second period, when Brad Marchand dove at the knees of an incoming Sami Salo, earning five and a game for clipping. (And yes, “clipping” is a real NHL penalty. Thank you, Darcy Tucker!) The hit itself wasn’t funny, of course — Salo missed time with an injury. But Marchand did bring the comedy when it came time to offer up an excuse: He was acting in self-defense. He felt threatened, you see. By Sami Salo.

Now, there’s really no nice way to say this, so let’s just put it out there: Nobody feels threatened by Sami Salo. Oh, he’s a good player. And he’s tough, in the sense that you have to be tough to ever want to play hockey again after suffering an injury that results in you being the subject of actual headlines like “Sami Salo’s Testicle Is Still Intact.” So yeah, the kid has bal … er, courage.

But he’s not intimidating. And if the sight of Salo gliding slowly toward you makes you feel the need to duck and cover, it’s time to consider the possibility you may be playing the wrong sport. When it comes to unlikely excuses, “I felt threatened by Sami Salo” is right up there with “The dog ate my homework” and “I was distracted by the Oilers playoff game.”

It didn’t work, of course. Brendan Shanahan hit Marchand with a five-game suspension, which he explained in a video in which he actually pointed out how utterly non-threatening Salo was being at the time. So nice try, Brad. Maybe next time, just say the light was in your eyes.

(And just for the record, Sami Salo would destroy me in a fight in about 12 seconds. But even then, I’d feel completely non-threatened the entire time. I’d be thinking things like Wow, he is adorable when he’s angry and That’s kind of weird how his knee bends the wrong way these days and I can barely hear his squeals or rage because of all the blood pouring out out of my ears.)

Scott Hartnell, Philadelphia Flyers
Scott Hartnell was quite possibly my favorite All-Star this year. For one thing, he genuinely wanted to be there, unlike virtually everyone else in the NHL. And when he was initially left off the rosters, he responded by scoring five goals in one weekend and was eventually named to the team as a replacement.

It got better. He celebrated his selection by pledging to donate $1,000 to charity for every time he fell down during the game, a nod to the popular #hartnelldown meme, which most players would be embarrassed by but he’s embraced. Going into Sunday’s All-Star game, you had to be rooting for the guy.

Now look, I’m about as unabashed a Leafs homer as you’ll ever find. But if you don’t think that dropping a “Suck it, Phaneuf” on live television is funny, then I don’t think we could be friends. Bonus points for the Ric Flair-style “Whooo!” tacked on to the end. If every hockey reporter in the entire world hadn’t been busy hammering out identical fluff pieces about Daniel Alfredsson at the moment, they would have risen up and insisted that Hartnell be awarded the game’s MVP award right on the spot.

The line about being the third Sedin triplet was solid, too. But still. “Suck it, Phaneuf. Whooo!” That’s some first-star dialogue right there.

(And in case you’re wondering, Dion Phaneuf took the chirp in good humor. Which was good news for Hartnell, since he wouldn’t want Dion to get his blueline partner to lodge a complaint.)