Stuck in the Middle: The Milwaukee Bucks’ Dilemma 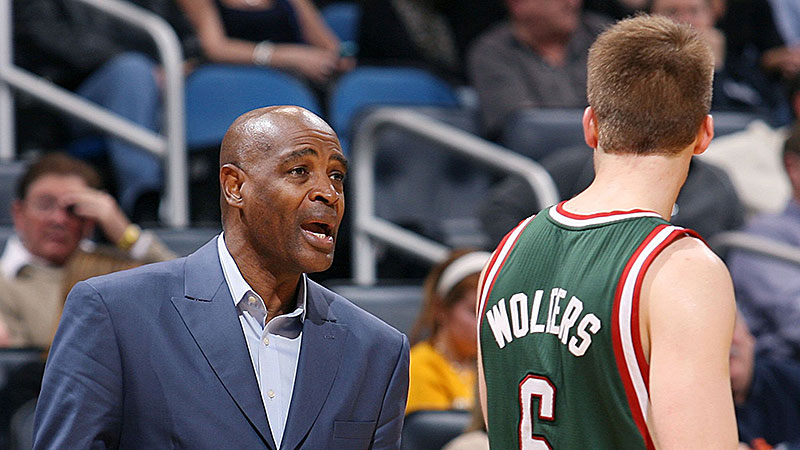 In a league chock-full of teams with premeditated plans for tanking, the Milwaukee Bucks have really outdone themselves. Despite cries from fans to join the tank division over the summer, the Bucks’ intentions remained the same as in past years: develop their core while still contending for one of the final playoff spots in the Eastern Conference. Needless to say, this season wasn’t exactly what general manager John Hammond had in mind.

Nine wins (six and seven fewer than franchises like Orlando and Philadelphia, respectively, both of which were designed to be bad), a .173 winning percentage, and a hell of a lot of sloppy basketball have made Milwaukee the front-runner for the top overall pick in this June’s draft. Through some form of luck (it’s hard to classify as good or bad), the team has finally arrived at the logical destination for any franchise struggling with relevance. But here’s the thing: Hammond unintentionally guided the team to this point. And he will now likely be responsible for overseeing a rebuild around a high lottery pick from a loaded draft. If karmic law is your thing, this basketball league might not be for you.

This scenario involving Hammond and the Bucks is emblematic of a bigger problem plaguing the NBA. Ever since the inception of the moral hazard that is rewarding bad franchises with high-value draft picks, underwhelming executives — some far more destructive than others — have been given more opportunities to screw them up.

General managers like David Kahn, Bryan Colangelo, Danny Ferry (the Cleveland edition), Larry Harris, Ernie Grunfeld, and the recently fired Chris Grant are among those who failed to turn around their snakebitten franchises with the help of high lottery picks.

Instead, all of them (and others; the list is long) only used the time afforded by a rebuilding process to showcase their inability to construct a fully functioning team around promising young players. Had the panacea of the draft lottery been replaced by another mechanism, executives with flawed team-building philosophies would likely be exposed far earlier.

A Look Back at the Hammond Era

Operating under Bucks owner Herb Kohl’s strict “eighth seed or bust” mandate has always made it difficult to evaluate Hammond’s time in charge. Tearing the team down and building from scratch has never been an option. Hammond has been forced to work within certain parameters at a franchise that’s been hemorrhaging cash the past few years. It’s not an easy position to be in. He’s been caught between burn-it-down and win-now.

A series of good drafts allowed Hammond to set himself up for the latter. Aside from the Joe Alexander debacle, the GM has received great value from his first- and second-round selections. Brandon Jennings, Larry Sanders, Tobias Harris, John Henson, and everyone’s favorite Greek (outside of me, of course), Giannis Antetokounmpo, range from productive to promising. Second-round selections like Jodie Meeks, Luc Richard Mbah a Moute, Jon Leuer, and Nate Wolters have either carved out a place in the league or are on their way to do so — a major coup, given the typical career for players drafted that low.

For as good as Hammond has been as a talent evaluator, he’s been equally bad as an economist. He has an unhealthy addiction to midlevel contracts, the type that traditionally produces the least amount of value in return. Players like Drew Gooden, John Salmons, Hakim Warrick, and, more recently, Zaza Pachulia and O.J. Mayo have benefited from this disparity. In a world where a new school of executives like Ryan McDonough and Sam Hinkie are straying from these high-risk, low-reward deals, Hammond has continued to funnel money into the wrong type of contract. It’s been particularly frustrating in the cases of Salmons and Warrick, because at least three-quarters of their production could have been replaced at a fraction of the price.

Even more maddening was the jettisoning of Harris in a deal that brought back J.J. Redick at last February’s trade deadline. Hammond essentially dealt one of the most valuable contracts you can possess — a productive young player on his rookie deal — for a veteran player he was (presumably) looking to re-sign. Redick is on the Clippers now, and the Bucks have nothing to show for Harris.

The biggest critique of Hammond’s tenure is that he make knee-jerk responses to team needs in the place of a holistic, long-term vision. After the team finished near the bottom of the league in free-throw attempts in 2009-10, Hammond swung a trade that summer for human foul-magnet (and noticeably declining veteran) Corey Maggette. The following offseason, after swinging and missing on Warrick in the summer of 2009 and letting veteran Kurt Thomas walk in free agency, the Bucks lacked a frontcourt partner for Andrew Bogut. So in the summer of 2010, despite the presence of a developing Ersan Ilyasova, the Bucks used their financial flexibility to sign Gooden.

Fast-forward to March of 2012: Bogut, dealing with the effects of his gruesome elbow injury, is struggling to stay on the court, and the Bucks’ offense is garbage. Out goes Bogut, in comes volume scorer Monta Ellis. To cap it all off, Hammond let a hard-nosed tactician in Scott Skiles depart and replaced him with Larry Drew, a coach beloved by his players but one whose teams consistently deliver head-scratching performances thanks to questionable (or altogether lacking) tactics.

None of these decisions, however, have demonstrated the danger of such shortsighted thinking like the Bogut-Ellis deal. Thanks to the rise of analytics, it was easy, even without the benefit of hindsight, to identify the value of both players (at full strength). Ellis is/was an inefficient scorer with little defensive value. Bogut can anchor an elite defense — like he did before his elbow injury in 2009. Though the move was partly a desperate ploy to fulfill Kohl’s playoff mandate, the long-term benefits of a healthy Bogut far outweighed the immediate need for points. Completely overhauling both the coaching and training staff to rehabilitate Bogut’s body and mind was a much better option than dealing for an undersize, inefficient scorer. That’s especially true considering that without Bogut’s big presence (literally), Hammond made another reactionary move, trading Shaun Livingston (cheap, valuable rotation guard) and promising youngster Leuer (18.1 PER in 34 games for Memphis this season) for center Samuel Dalembert.

What the franchise needed then, as it does now, was a layered approach, one that included scrounging through the scrap heap or Europe (think P.J. Tucker or Patrick Beverley) to uncover miscast veterans that kept the team in the playoff hunt while youngsters, like Harris, developed into key pieces. Development should have been the priority; think about how Alvin Gentry handled Goran Dragic’s second season on a veteran Phoenix team that went to the Western Conference finals in 2010. The Bucks never had a coach-player dynamic like that for any of their young talents.

It’s not as if Hammond is, or even necessarily was, dumb. I know John Hammond personally, thanks to my time interning with the Bucks, and I can assure you he is not overwhelmed; he’s not walking the hallways of the Cousins Center trying to pick up coffee pots by the glass with both hands. It’s easy to dehumanize people in his position and turn them into a punch line (Kaaaaaaaaahn!). With Milwaukee’s particular ownership situation, it’s hard to tell how many decisions were solely Hammond’s. On top of that, Hammond has also been a victim of some serious bad luck, like the Bogut injury killing the momentum of a feisty up-and-coming team.

Hammond was vocal this offseason that this team was not built to tank. The team has trumpeted the injury excuse as the driving force behind its demise, but it’s hard to look at teams like Chicago and even the L.A. Lakers (nine more wins than Milwaukee) and have that much sympathy.

The Bucks have completely imploded because of their injury problems. But there also have been poor execution and questionable lineup choices, making Drew’s hire, after an uninspiring stint in Atlanta, look like one of the worst moves in Hammond’s tenure. Yet despite getting all of this wrong, there has been nothing suggesting Hammond won’t be around to make Milwaukee’s lottery pick in the summer.

The worrisome thing for Bucks fans is that their franchise’s future in the city of Milwaukee hangs in the balance. Thanks to decades of losing — save for the brief George Karl era — fan apathy along with ownership and arena issues have raised the stakes on this most recent rebuilding effort. If Hammond proves unfit to use this summer’s venture into lottery-land as a way to catapult the team back into relevance, it could have far more serious consequences than simply more futility.

A few [hours] before he hurdled G-Man for his unforgettable reverse dunk to claim the dunk contest, Wall made a peculiar bet with Bradley Beal about last Saturday’s college basketball game between his 18th-ranked Wildcats and Beal’s second-ranked Florida Gators ... “I got to go buy me a onesie … and I will wear it to practice and I will wear it all day long,” Wall said.