Stephen Curry Tells His Own Story 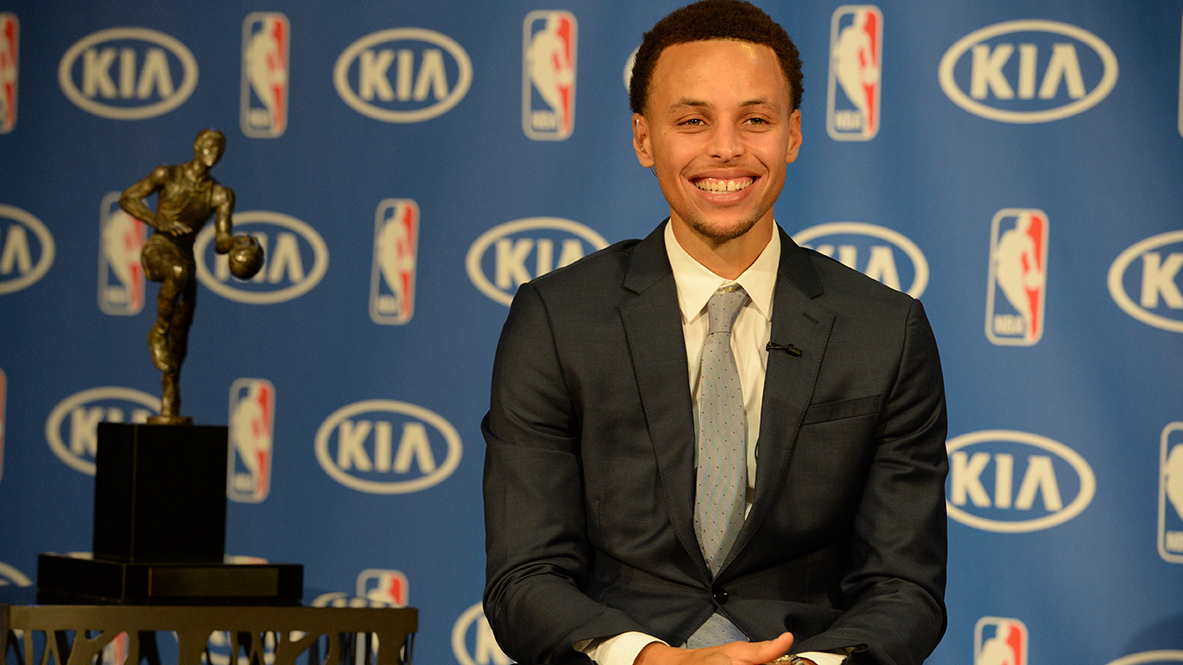 Inside a hotel ballroom in downtown Oakland, a man was talking about the time he drove to the airport 40 years ago to welcome home the Golden State Warriors after they last won the NBA championship. “But I like this team better,” he said. “Fewer prima donnas.”

How often is it that you hear someone outside of a Billy Joel song admit that the good old days weren’t nearly as enjoyable as the present moment? And yet it’s true. There’s something impossibly charming about this Warriors team, something that continually feels too good to be true. They joke around like college teams do, their stars seem to genuinely get along, and their locker room is populated by overachievers like Draymond Green and Klay Thompson — long shots coming out of college who found a niche on a team that went after players who didn’t cohere to the traditional positional definitions of NBA players. They replaced one relatively successful coach/broadcaster hybrid with an even more successful coach/broadcaster hybrid, and they’ve cultivated what might be the best home-court advantage in the modern history of the league.

If the Warriors do fall short of a championship — if somehow it all falls apart from here — we’ll recall how all of these warm fuzzy feelings culminated on Monday afternoon, when Stephen Curry accepted his NBA MVP award inside that hotel ballroom. It didn’t quite live up to the emotionally wrenching standard Kevin Durant set last season, but it was a feel-good afternoon nonetheless. Curry thanked everyone from his mother (for holding him out of a middle school basketball game because he didn’t wash the dishes) to the team’s head of security (“Where’s Ralph? Oh, he’s guarding the door”) to the equipment manager (for providing him with a steady supply of socks).

In fact, if Durant’s MVP moment was a rags-to-riches story of a mother standing by her son, Curry’s served as a compelling corollary: Here was a kid who grew up the son of a tremendous NBA player, who spent the majority of his childhood trying to live up to his family name. And at least before he found himself in college, it seemed like he never would.

Other than Steve Nash, no late-blooming guard from a mid-major university has transformed himself into an MVP, and that was the gist of Curry’s message Monday afternoon: That he had to work to craft his own narrative outside of his father’s story.1 That he had to reconstruct his jump shot because he wasn’t strong enough to do anything but catapult the ball over his head when he was a kid. That he got harassed all through high school because he was the son of Dell Curry, a legend in Charlotte, and people presumed he had every advantage by virtue of his genes. That few schools outside of Davidson recruited him, and that even with a father who played 16 seasons in the NBA, he never really felt like he had a clear path to the NBA. That he landed in Golden State at a moment when the franchise was at a nadir, when it seemed like it might take a miracle to turn it around.

That miracle came, of course, with a new ownership group and a new front office and the hiring of Kerr, who pushed Curry to a new level, particularly on defense. “I’ve enjoyed this year more than any other,” Curry told Kerr yesterday, and perhaps what’s most interesting about this year in Oakland is that the same narrative that applies to Curry applies to the Warriors as a whole: We keep expecting them to get overpowered, to fail in some way, to get exposed for their weaknesses of their unconventional makeup. We keep hearing they might not be big enough, might not be strong enough to win a title; we keep hearing they can’t possibly be this good, and that Curry cannot keep getting better and better. And at least for now, we’re still waiting for these hypotheses to be proven.

“You don’t have to live anybody else’s story,” Curry said Monday, and, if nothing else, that may turn out to be the message this Warriors team conveys: As long as they keep on winning, they don’t have to live up to anyone’s expectations of what a championship team should be.

First-Round Epitaph: How the NBA’s Playoff Casualties Will Spend for the Future