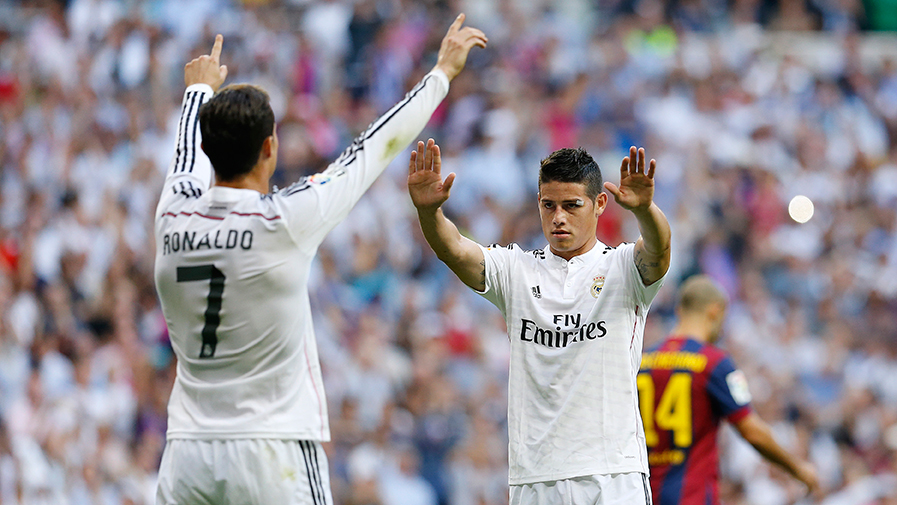 We’ll resume your regularly scheduled teeth gnashing over the weird state of the Premier League table at a later date (I see you, West Ham and Manchester United). Right now, it’s all about El Clásico. Everybody loves El Clásico. It’s one of the few matchups truly in the running for the greatest rivalry on earth, precisely because it extends beyond sports. The fans hate each other, with a long and rich history of sports hatred stemming from real sociopolitical underpinnings and cultural identity. It’s as real life as huge sports rivalries get.

Barcelona and Real Madrid also play each other all the freaking time — two league matches a year, and often times in the Copa del Rey and the preseason Supercopa. Then there’s the occasional, drama-filled clash in the late stages of the Champions League.

The frequency of the matches doesn’t diminish the rivalry, but it does color it. All Clásicos are not created equal. Each time the teams meet, the match has a slightly different feel, depending on the time of year, competition, relative form of the two clubs, and a host of other factors.

Saturday’s match felt more prologue than climax — the beginning of a season-long story between two giants. And Real Madrid held serve at home.

The match was notable for the ways it exposed the problems lurking beneath the surface for both sides. The early goal Real Madrid conceded showed exactly how exposed their back four can be, with Toni Kroos and Luka Modric as a central midfield pair in front of them. Neymar had far too much time and space to run across the defensive line, without any interference from a midfielder crashing back.

For Barcelona, the problems came from the expected places: central-defensive mistakes (Gerard Piqué conceded a silly penalty on a handball) and lack of physical presence on set pieces. Case in point:

During the José Mourinho era at Real Madrid, these matches came down to Barcelona trying to keep possession, build up play, and eventually strike, while Mourinho’s men tried to stop them. In some ways, that’s why Mourinho’s time at Madrid, despite the results, wasn’t considered a full-fledged success. A club like Real Madrid expects to take their game to their opponents, not nullify them. Mourinho won trophies, but he didn’t do it the Madrid way.

Saturday’s Clásico was exciting, even if the game itself wasn’t particularly close, because it showed a complete commitment from both sides to do what they do best: attack, and score, and attack some more.

Real Madrid’s commitment to offensive football under Carlo Ancelotti has been mirrored by Barcelona under Luis Enrique. Neymar and Luis Suárez are, without question, upgrades over the previous generation of wingers at Barcelona. With Lionel Messi in a more central role, the wingers had become fundamentally complementary players (even when they were goal scorers like David Villa), primarily used to create space for Messi to be awesome. Neymar and Suárez, however, unleash the awesome in the space Messi creates. And Messi, to his credit, seems happy to evolve into a playmaker.

But — and this is an important but — that means less strict positioning from the wingers, which makes Barcelona’s pressing game harder to implement. Barcelona’s biggest defensive advantage during the tika-taka era has been the ability to win the ball back almost immediately. When Pedro was a regular starter on the wing, or when Andrés Iniesta started there instead of in the central midfield, the immediate work rate, positioning, and tactical awareness they provided meant teams were routinely turning the ball right back over.

Neymar and Suárez don’t do that, nor should they be expected to. Combine that with the aging of Xavi, and team defending is going to suffer.

Not that Barcelona were leaking goals before El Clásico. Before Saturday’s clash, the Catalan club hadn’t conceded a goal in La Liga play this season. But that’s more a testament to how much possession they had and how talented a fireman Sergio Busquets is. As this Barcelona team evolves, they’re becoming more focused on scoring the ball when they have it, with less emphasis on winning it back as soon as they give it up.

You could look at this past summer’s wonderful World Cup in Brazil as a month-long coming attraction for El Clásico. James became an international superstar, Suárez cemented his role as a supervillain, Neymar broke his back, and Kroos lifted the sport’s ultimate trophy. Right in Messi’s face. We’ve been waiting for this match ever since the final whistle in Rio. What would it look like when all these megawatt talents lined up against one another, wearing the colors of two of the greatest teams in world sports?

As prologues go, this match was incredibly entertaining. I mean … this happened!

What’s crazy is that neither team was at its attacking peak for the game. Madrid were without Gareth Bale. And while that meant we got to see James (in his more natural position) and Isco, neither can do Gareth Bale things. Nobody, except maybe Cristiano Ronaldo, can do Gareth Bale things. On the Barca side, Suárez took the field for the first time this season. And while he was involved in the buildup to Neymar’s goal, he was not yet Luis Suárez. As Suárez gets integrated into the squad and Xavi continues to cede time to Ivan Rakitic, Barcelona’s goal-scoring prowess will grow. So, next time out, these two teams will be even more mouthwatering.