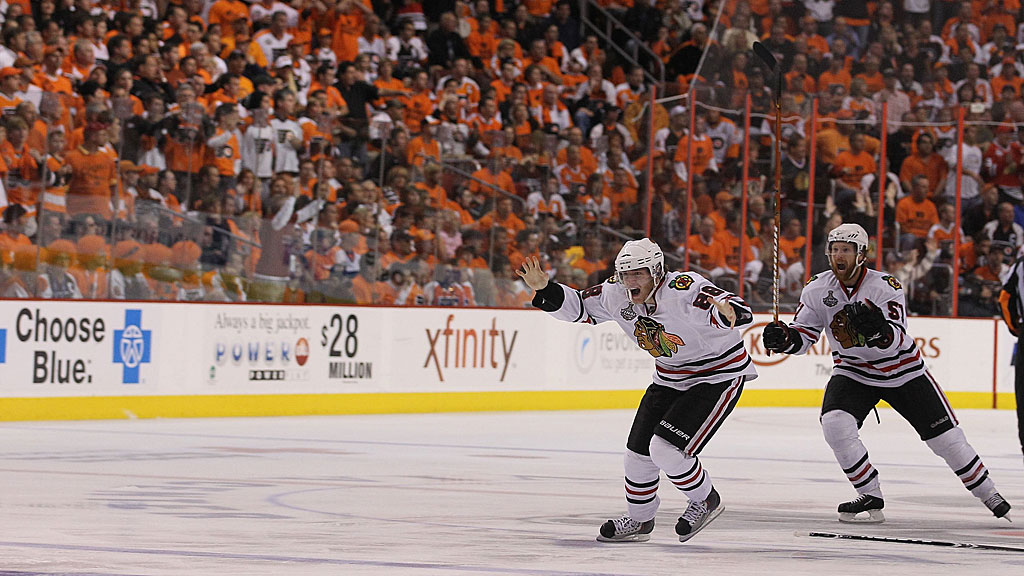 Monday was St. Patrick’s Day, and since you’re a hockey fan, I’m just going to go ahead and assume you’re hungover right now.

And that’s fine, because we’re going to keep it light today with a St. Patrick’s Day theme. The NHL has been blessed with plenty of Pats and Patricks over the years, and they’ve combined to create several memorable moments that are ripe for an arbitrary ranking. Lots of YouTube videos, with not too much thinking required on your part. Or mine, if we’re being honest.

One ground rule: Each Patrick can have only one moment on the list, because otherwise the entire thing would just be one guy. Also, we’re looking at Pats and Patricks here; we will not be including anyone named Patrik or Patrice. Because screw guys named Patrice, that’s why.

So let’s do this … the Top 10 Most Memorable NHL Moments From Hockey’s Pats and Patricks.

Around the NHL, Patrick Marleau is known for three things. He’s the Sharks’ all-time leading scorer. He holds the modern record for the best start to a season, scoring 11 points in his first four games in 2012-13. And he has, without question, the greatest eyebrows in league history. Wait, I guess that’s four things. Math is hard.

In Vancouver, he may wind up with another claim to fame: as the player who ended the Canucks’ run as one of the league’s best teams. After a dominant run that included back-to-back Presidents’ Trophies and an agonizing seven-game loss in the 2011 final, the Canucks went into their 2013 first-round matchup against Marleau and the Sharks as slight favorites. Instead, San Jose took a 3-0 series lead into a fourth game that wound up in overtime. That’s when Marleau showed up with the dagger.

The loss was the last game in a Vancouver uniform for Cory Schneider, cost coach Alain Vigneault his job, and set the Canucks down the road to this season’s disaster. As for Marleau, the goal was just one more piece of evidence that Jeremy Roenick was wrong about him.

The NHL has a long history of ugly violence. The 1970s and ’80s featured a number of bench-clearing brawls, some of which came before the game even started, and every now and then a team would randomly climb into the stands and start beating fans with shoes.

So you might assume that any fight that ended up setting the all-time record for total PIMs in one game would probably be an epic battle featuring bloodshed, flying teeth, and maybe samurai swords. Not quite. As we can see at the 4:15 mark of the clip below, the league record actually ended up being broken by a tickle-fight between Patrick Sharp and Jason Spezza.

This, of course, is from the infamous Senators/Flyers game in 2004 that featured two line brawls, several additional fights, and a group of officials who wet their pants and started handing out multiple misconducts to every player who got even vaguely involved.

That last bit helped push the game’s PIM total into record territory, and the Sharp/Spezza scrap was the one that put it over the top. Despite it lasting just five seconds, the referees decided the fight was worth a combined 60 minutes in penalties. Sixty! Imagine if any of the punches had landed.

By the way, I’ve always enjoyed the way Sharp’s Wikipedia page includes this disambiguation link: “For the Scottish theologian, see Patrick Sharp (theologian).” Blackhawk fans, does Patrick Sharp have a cool nickname yet? If not, can I suggest “The Scottish Theologian”?

I know we said this list was for players, but when you’ve got an entire team named the St. Patricks that wears green and white, it needs to be make an appearance somewhere. The St. Pats became Toronto’s NHL team from 1919 when the Toronto Arenas ownership went bankrupt. In 1922, they played Vancouver for the Stanley Cup. They took the series in a fifth and deciding game with a 5-1 win, thanks to a four-goal game from Babe Dye, a legendary performance that for some reason is not on YouTube.

In 1927, the team was sold to Conn Smythe, who renamed it the Maple Leafs. Here’s former Leafs captain Mats Sundin wearing a St. Pats uniform, just because.

Craig Patrick was a member of the famed Patrick family (more on them in a moment) with a long résumé as an NHL player, coach, and GM. And in a career full of important managerial moments, one is still shaping the league to this day.

In the summer of 2005, the NHL had a problem. Sidney Crosby, arguably the best prospect the league had seen since Mario Lemieux, was eligible for that year’s draft, and a sure thing to be picked first overall. But due to the recently concluded lockout that had wiped out the entire season, there was no draft order to speak of.

The solution was a weighted lottery, and the hockey gods smiled on Patrick and the Penguins. Their number came up, paving the way for Crosby to head to Pittsburgh.

Almost a decade later, Crosby is the league’s best player and has already guided the Penguins to one Stanley Cup. Patrick wasn’t around to see it, though — after 17 years as Pittsburgh’s general manager, he was fired a year after the Crosby draft.

In 2004, Lalime and the Senators faced their archrivals, the Maple Leafs, in a seventh and deciding game of the first round. After three straight series losses against Toronto, this game was the chance to erase all that misery and finally slay the Maple Leaf dragon.

What? It’s my list, I get to choose which moments are considered “great.”

I know we’ve covered this before, but I really think you could make the case for “The Little Ball of Hate” being the greatest hockey nickname of all time. It’s definitely in the discussion. I’m sure glad that the brilliance of Verbeek’s nickname is recognized by all true hockey fans, and no fan base has ever made a pathetic attempt to steal it for one of their own players.

As for how Verbeek got the name, gosh, I really have no idea.

Pat Burns was the best. He holds the NHL record for winning the Jack Adams as coach of the year (with three different teams), he led the Devils to the 2003, and he was entertaining as hell to watch, thanks to his frequent bench temper tantrums and occasional attempts to attack the opposing coach.

You could choose from literally about a dozen classic Burns moments and nobody would complain. But I’m going to continue what’s apparently becoming the theme of this post and go with a homer choice: the night in 1993 that Burns made his return to Montreal, led the Leafs to a wild 5-4 win, and then demonstrated the greatest windmill fist-pump ever executed by a pro sports coach.

This seems like a good time to mention that Pat Burns isn’t in the Hall of Fame and it’s a disgrace. He did everything a coach could do, short of strapping on the pads and putting himself in net.

5. Lester Patrick Straps on the Pads and Puts Himself in Net

Lester Patrick was one of the most influential men in hockey’s early history. In addition to being a member of what’s often called “Hockey’s Royal Family,” he had a distinguished playing career as the game’s first offensive defenseman before going on to a long career as a general manager and head coach.

It was in the latter role that Patrick had arguably his most memorable moment. In the 1928 Stanley Cup final, Patrick was coaching the Rangers in a game against the Montreal Maroons when goaltender Lorne Chabot took a puck in the face. The Maroons refused to allow the Rangers to bring in an emergency replacement. So Patrick did the next best thing: He grabbed a set of pads and put himself in net.

Patrick stopped 18 of 19 shots, and the Rangers won in overtime. They’d go on to win the series and the Stanley Cup.

Come on, we can’t have a St. Patrick’s Day–themed post without making room for the journeyman center, who happened to have the most Irish name that’s even theoretically possible.

Unfortunately, I can’t think of a single memorable moment from Patrick O’Sullivan’s career. But please enjoy this fan-made highlight reel of him scoring generic regular-season goals.

Back before he became one of the league’s winningest coaches and general managers, Quinn was a hard-nosed rookie defenseman for the Maple Leafs, as they faced the Boston Bruins in the 1969 playoffs. And in the most memorable moment of his playing career, he accomplished something few players ever managed: He caught Bobby Orr with his head down.

The Bruins ended up winning the game 10-0, but that hardly mattered. The hit led to a massive brawl that saw diminutive Maple Leafs tough guy Forbes Kennedy, in what would turn out to be the final NHL appearance of his career, set several penalty-minute records by fighting three different Bruins, one linesman, and half the Boston crowd.

Old-time Bruins fans were the best.

This one gets bonus points for taking place between a pair of Patrick Division teams. In 1987, the Caps and Islanders met in the playoffs, because it was the mid-’80s and that was the rule. The series turned out to be a good one, and it culminated in a classic Game 7 that was tied after 60 minutes. And then, it was tied after 60 more minutes. By the time the game reached a fourth sudden-death overtime period, the players were exhausted, Saturday had turned to Easter Sunday, Bill Clement and Doc Emrick had lost their minds, and the hockey world was begging for someone to put an end to it.

That someone turned out to be Pat LaFontaine, who’s spinning slap shot ended the Capitals’ season with a memorable thunk:

Side note: This game lasted longer than any front-office job LaFontaine has ever held.

Honorable Mention: Don’t Blame Me, I Voted for Rory Fitzpatrick

Maybe you’d disqualify him on a technicality because of the “Fitz,” but I prefer to focus on Rory Fitzpatrick having been a journeyman defenseman who spent more time on the waiver wire than the ice, but still managed to be voted to start the NHL All-Star team.

That happened in 2007, when an Internet-based grassroots campaign encouraged fans to cast a write-in vote for the defenseman, who at the time had recorded zero points. He finished with more than a half million votes, well ahead of players like Chris Pronger and Dion Phaneuf.

And yes, he was voted onto the team, despite the NHL’s claim that he finished third. The league rigged the vote, because the fans thought it was fun and they hate you.

It’s the moment every kid who’s ever picked up a stick dreams of: overtime in the Stanley Cup final, and you score the winning goal. We’ve all celebrated that moment, tossing off our gloves and jumping around all alone in our driveway or backyard rink.

In 2010, Patrick Kane got to live it out in real life … including the awkward “celebrating by yourself” part, thanks to a weird disappearing-puck moment that left almost everyone watching, including most of his teammates, unaware the season had just ended.

Look on the bright side, Flyer fans: At least you finally got to see a guy wearing no. 88 come through in the clutch.

Oh, who am I kidding. It’s you, crazy fights against Red Wings goalies. It’s always been you.

Tonight, Roy returns to Montreal for the first time as a head coach. There won’t be a pregame ceremony to welcome him home, because nobody trusts him to behave himself when he gets near center ice.

Gerald Henderson and This Dunk: A Missed Connections Ad