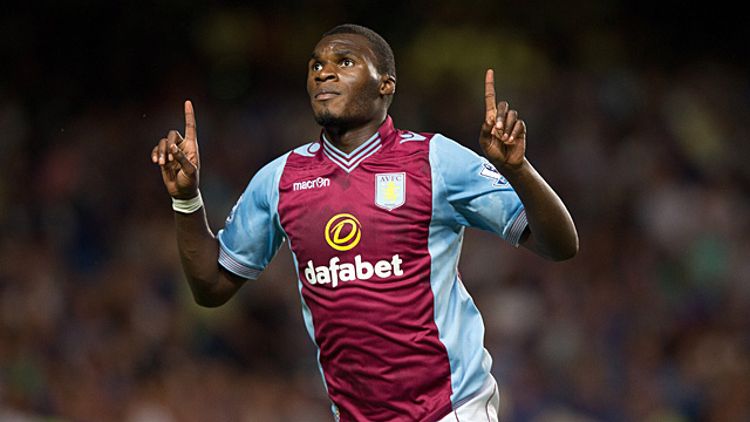 Aston Villa have certainly started the season with a bang. Going to Arsenal and winning, and coming within a few controversial no-calls from drawing at Chelsea to start the season is certainly a great way to make fans sit up and take notice. Villa has been playing in a counterattacking style: Don’t contest possession, defend patiently and compactly, and then break quickly via a target center forward and speedy wingers, after winning the ball back. It’s a classic formula, and it’s one that’s working for Villa thanks to their not-so-secret weapon, Christian Benteke.

The dirty little secret about counterattacking teams is that most of them are lying to you. Too often the gameplan isn’t so much to counterattack, as to defend, hope to get lucky, and score a goal on a set piece. Think of the Stoke and Sunderland teams of years gone; they would often times seemingly abandoned any offensive efforts that weren’t, “hope for a double deflection from a free kick.” Villa, however, at least at their best, manage to avoid that trap thanks to Benteke. He’s more than just their goal scorer he’s also the hub of Aston Villa’s attack.

Wednesday’s Chelsea game is a perfect example. Benteke’s goal came on the only shot of the night he took, but despite his lack of looks at goal he was still heavily involved.

Despite only getting the ball in the penalty area twice, Benteke still received a whopping 46 passes, that’s a whopping 23.3 percent of the total passes Aston Villa played.The passes played by Benteke were a bit more problematic. There sure are an awful lot of those incomplete red lines. There’s a reason for that. 14 of those passes are headed balls, and only three were successful. Take those out of the equation and Benteke was a much more respectable, if still not astounding, 17 for 26 (heading stats, as well as all the numbers to come are thanks to ESPN Stats & Info, who actually credit Benteke with 41 total pass attempts making him 17 for 27 on the ground. There’s no official scorer in soccer, and sometimes different sources differ slightly on statistical definitions, such is life in the unpredictable world of soccer statistics). Benteke also created three chances, two of which were the absolute gold standard of goal scoring opportunities. Twice he got Andreas Weimann the opportunity to shoot the ball centrally, from within 12 yards, with his feet. Goal scoring chances don’t come any better than that. So, despite taking only one shot, Benteke was by far the most involved attacking player for Aston Villa.

And the Chelsea game wasn’t an isolated incident, it’s simply what Benteke does. The combination of clinical finishing and physical prowess in the air was prevalent in statistic-warping ways all of last season as well. Benteke had more headed pass attempts and completions (160/410) last season than anybody not named Peter Crouch (because … of course) who went for 204/522. He also tied with Olivier Giroud for the most headed attempts at goal with 34, and his four headed goals tied him for third in the league behind Michu’s six and Marouane Fellaini’s five. As a direct result, Villa, as a team, had the second highest crossing percentage in the league, completing 26.3 percent of their attempts, despite crossing it from the longest average distance of any team (31.4 yards). Benteke also spent a large chunk of time last year doing hard work in the middle of the field. When he was on the pitch, 19.9 percent of all Villa passes were either made to or by the Belgian forward. But, out of all that action, only 10.2 percent of the passes he received were in the penalty area.

Oh, and don’t forget the prolific goal scoring. Benteke’s average of 0.49 non penalty goals per 90 minutes puts him 10th in the league for all players with over 50 attempts. Those goals came from an average of only three shots per game, fewer shots than anybody above him in the goal scoring table. In other words Benteke was an incredibly efficient scorer. That’s despite the fact that almost a third of his shots were headers, and headers are consistently harder to score with than traditional shots from the same location.

There are two things that counterattacking teams need from their forwards. First, they need them to provide an outlet. Second, they need them to be efficient in front of the net. Without the first skill, teams risk getting pinned in their own areas with no means of escape, and the second skill is particularly important for teams that will be creating fewer chances than their opponents. Benteke, despite being only 22 years old, excels in both of those areas, and it’s because of him that Villa are one of the only teams in the league able to effectively play a traditional counterattacking brand of soccer.

It is fair to ask why, if Benteke is such a monster, Villa spent the majority of last season fighting a relegation battle and ended up in 15th place, only five points clear of the drop. There are two answers to that question. The first has to do with injuries. According to work done by Ben Pugsley Aston Villa’s players missed more games due to injury than any other squad (here’s the full list of teams plus some extra injury analysis to boot). In effect Aston Villa had 5.76 players injured per game last season. For a squad without a lot of depth to begin with, losing those players was an extremely heavy burden to carry. It’s hard to imagine the team enduring that much sheer bad luck again (although they’ve had to take a defender off due to injury each of the first two games, so maybe not).

The second reason for their struggles is somewhat counterintuitive. They were completely and totally unable to hold onto leads. Aston Villa had the second worst goal differential in the league when they were winning by a goal, taking the second fewest amount of points from those games. Only Newcastle were worse. Conventional wisdom suggests that Villa would thrive in situations where they are winning. After all what’s better for a counter attacking team than facing a team that has to attack. But, part of thriving means not giving up goals. Villa coughed up the lead 17 times when they were ahead by a goal, last season, resulting in eight draws and four losses. Three of those times it was on the way to giving up a two goal lead. That’s mind bogglingly bad. A team could have the best counterattack in the world, but if their defense isn’t able to hold a lead, they’ll never have the time to build on it. It seems as though a Villa team which was built to invite pressure could only withstand so much, and especially as games progressed into the later stages they were unable to cope with increased pressure. They conceded 10 times when up a single goal with a half hour left, with five of those coming in the last 15 minutes.

Aston Villa are faced with an interesting conundrum this season. For most counterattacking teams, defense comes first, and the attack part of counterattacking is an afterthought. They are forever looking for the perfect striker to complement a staunch defensive unit. Aston Villa have the opposite problem. Christian Benteke is as close to the perfect counterattacking striker as exists in soccer. However, their defense didn’t live up to its end of the bargain. With Benteke’s dominance, Villa could easily become a comfortable mid-table squad this year, but their defense will have to improve. What’s the point in having a breakout star of a striker if the rest of the team insists on giving his goals right back?