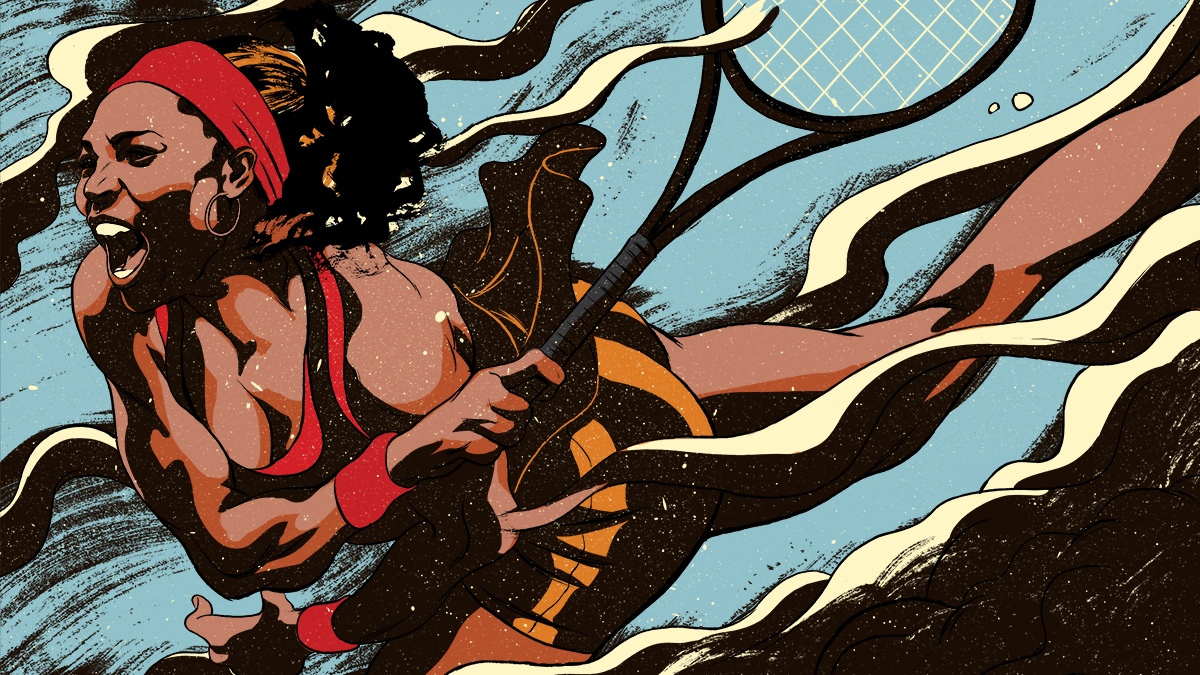 There is so much to say — an infinite amount. So let’s try to keep this simple.

The U.S. Open starts this weekend in New York. Serena Williams is playing for her 22nd major singles title, her fifth in a row, and the calendar Grand Slam.

A 22nd major would tie the Open era record set by Steffi Graf in 1999. A fifth consecutive major would equal a streak no player has achieved since Graf in 1989. A calendar-year Grand Slam is a feat many of history’s best players never managed — Graf did it, and Margaret Court did it, but not Martina Navratilova, not Chris Evert, not Billie Jean King. To accomplish all this in one tournament, as Serena is trying to do, would be — but it is impossible to say what it would be. There is nothing to compare it to, because no one has ever done anything quite like it before.

This is a moment.

I am thinking of a passage from All Day Permanent Red, Christopher Logue’s retelling of the first battle scenes in The Iliad, which I will leave here and then come back to. All Day Permanent Red is a poem that in many ways seems tailored to Serena in her most extreme mode of fantastic ascendancy, the Serena of obliterating first serves and straining biceps and 6-0 sets and streaming hair. It is a poem in which a goddess shrieks “better to die than to live without killing!”1 a poem in which enemies are there to be mowed down and their bones turned under the dust.

Serena has turned plenty of bones under the dust. The passage I am thinking of, though, is gentler. Night has fallen over the battlefield, and Logue imagines:

The earth
And its attendant moon
(Neither of great importance
But beautiful and dignified)
Making their way around the sun.

I am thinking about freedom.

For quite a while, because of her inconsistent presence in the game — the injuries, the wavering attention — it seemed unlikely that her career numbers would support this conclusion, even if it felt undeniable to anyone really paying attention. Then, at the moment when most athletes begin declining, she hired Patrick Mouratoglou as her coach and became better than ever. After turning 30, she has reeled off three U.S. Open titles, two Wimbledons, two French Opens, and an Australian Open. These are astonishing numbers. Eight majors, as many as King won in the Open era.2 And so she created this moment, somehow both stunning and utterly predictable, and this opportunity for a validation beyond all dispute.

There is, of course, more to it than that. As a black woman from Compton in a sport whose roots are affluent and white, Serena has always meant more to tennis, has always burned more intensely within the game, than her career trajectory alone would suggest. She has presented a threat to tennis fans opposed to change, and tennis fans have sometimes presented a threat to her. Her career has felt larger than life partly because of its transformative power and partly because of the drama that power has awakened in stadiums, over and over again: Rarely in the history of modern sports has a figure of such obvious strength seemed to stand so often in a kind of atmospheric peril. The strength was greater than the peril, and that’s one thing, apart from her talent, that she has given us.

Serena wears so many of her meanings on the surface. Her race. Her gender. Her elegance. Her background. Her resilience. These, or whatever synonyms or near-synonyms you want to substitute for them, are political attributes by nature, and Serena is a political figure, a representative figure, simply by virtue of being herself and doing what she does. Commentary around her pursuit of the Grand Slam has rightly emphasized her larger significance, whether by portraying her career as a clear narrative arc (as in this elegiac New York profile) or by exploring the interpretations she inspires (this New York Times Magazine profile by the poet Claudia Rankine, who has written better than anyone about Serena in the past few years, is called “The Meaning of Serena Williams”).

All this is as it should be. Serena is a figure of great cultural importance and great complexity. The moment before what could be her 22nd major win is a natural time to examine and celebrate her meaning as well as her forehand.

But I am thinking about freedom. Of course no one on earth is ever perfectly free, and there are as many ways to be unfree as there are people: your debt, your depression, your unreturned love, your job, your worry, your longing. One of the ways to be unfree, I think, is to be obliged to mean something. Freedom is the freedom to be meaningless. Is that obvious? A white man writing about sports, to pull an arbitrary example out of the air, is not operating in an arena where his mere participation will be construed as a political act: I am permitted to be, say, a lyric weirdo about soccer without my weirdness ramifying much beyond my own brain. This is the discretion of privilege, this leisurely prerogative whereby individuality draws its own boundaries. The more of one’s meanings are imposed from the outside, as a general rule, the further from privilege one is.

Serena’s burden of meaning places her a long way away from this kind of discretion. Her importance is too great. She faces expectations that I can barely imagine, and she lives up to them.

One of the things I love about her, though, is that she still insists on her freedom to be meaningless. Pointedly, in public, Serena refuses to be flattened into significance. She doesn’t shirk her cultural role but she also protects — and doesn’t hide — her own inner galaxy of humor, anger, sexiness, goofiness, sadness. She pouts. She yells. She shows her feelings on the court. She gets shy. She shares silly photos on social media. In a world where many NFL rookies are already playing characters in the media, Serena is only playing herself. For someone in such a complicated position, she is shockingly unguarded, and in a strangely beautiful way, her openness is what preserves her privacy. She shows us who she is, and showing us makes her inviolable.

Rankine suggests in her profile that Serena’s embrace of her humanity is partly what makes her a figure of “black excellence”: by “feel[ing] what she feels in front of everyone,” Serena refuses to obey the imperative that black champions stick to a kind of well-mannered humility. The strangeness of American life makes Serena’s capacity for absurdity both profoundly political and profoundly apolitical. To be absurd is to reject the authority of the white gaze. And then sometimes you just want to post a picture of your Yorkie in a Superman costume on Instagram.

There is so much to say about her — an infinite amount. But it is also very simple. This is a moment because Serena Williams is everything she is: one of the best athletes in the history of sports, a phenomenally talented black woman, and her own irreducible self. She will win the U.S. Open or she won’t, she will win her 22nd major or she won’t, but either way, she shows us a special version of freedom, not just through her physical talent but through her marvelous spontaneous performance of her own personality. She is important and tennis is important, but tennis is also just a game and she is also just a human being, beautiful and dignified, making her way around the sun.