Legal and Legendary: The Indomitable Serena Williams Wins Major No. 18 at the U.S. Open 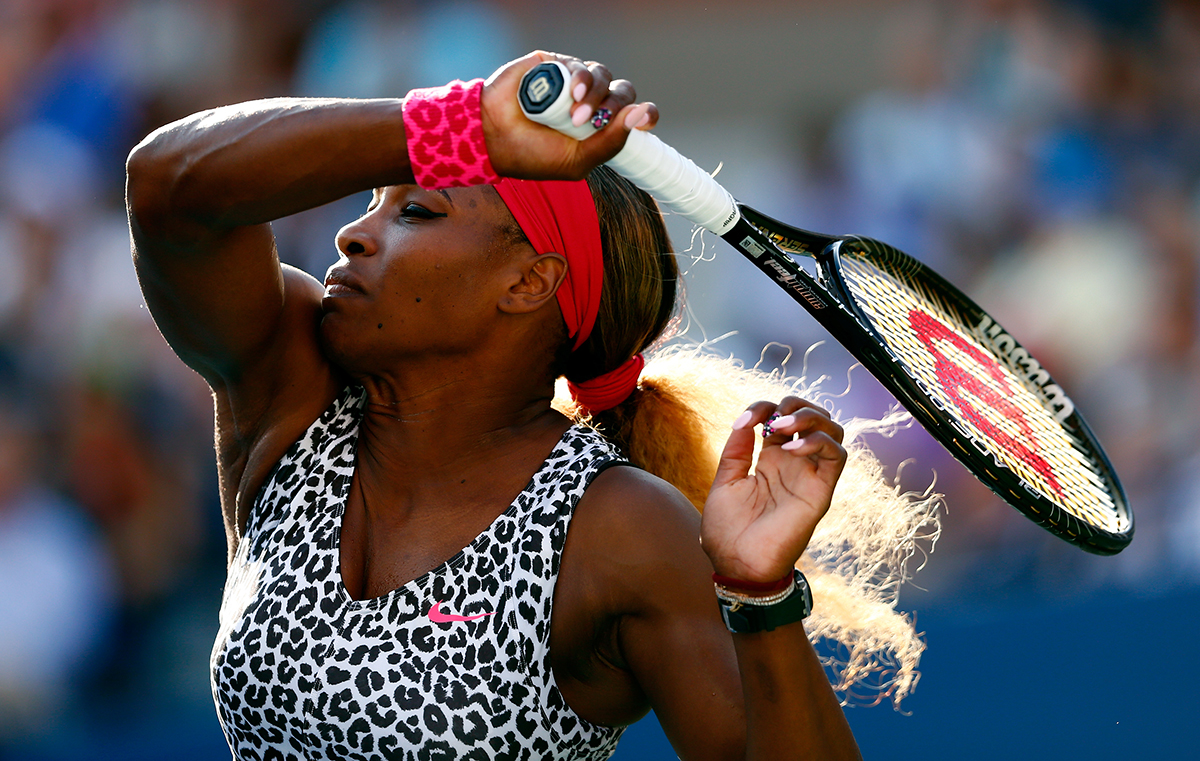 Before yesterday, Serena Williams had a terrible year. Bad, baffling losses at the first three majors. Long stretches in which her magnificent serve was merely mediocre. Games in which her freewheeling movement went from impossibly balanced to off-kilter. Points in which her backhand — such a simple, perfect, open stroke — would somehow kink and tighten. The net seemed a little higher on her side. Her opponents, it seemed, had figured it out. There was a kind of formula: beat her where she was best, beginning with the serve. Step in, take the return early, go for aggressive angles, and unsettle her. It was unsettling to see it work.

There were strange psychodynamics at work, impossible for anyone on the outside of her tight circle to understand but also impossible to ignore. There was that bizarre episode at Wimbledon, when she stumbled around the court. She said she was exhausted. She seemed to stop getting mad. She seemed to have lost her unrestrained energy, that preternatural awesome anger that she alone could control and direct, if barely, into the point of contact with a ball. Instead, this year, when she struggled, she not only seemed frustrated, she also often seemed sad. The funny thing in all of this is that she was still the best player in the world: not only still no. 1 in the rankings, but still the top performer in 2014 alone, still the one no one wanted to face, still the only player who could beat anyone. The problem was, that included herself.

The easiest way out of this narrative was obvious enough: win the U.S. Open in commanding fashion and so redeem her year. When she beat Caroline Wozniacki 6-3, 6-3 yesterday, in a match that didn’t seem even remotely that close, the story seemed to conclude neatly enough. She rediscovered her serve and started hitting aces at 120 mph, dominated with clean, efficient, powerful groundstrokes, and when she needed to — when Flavia Pennetta went up 3-0 in their semifinal match, for instance, or after Caroline Wozniacki earned a break point at the start of the first set in the final — she lit a little, brief, and angry flame. She won her 18th major, tying Martina Navratilova and Chrissie Evert for fourth on the list of most slams. It was her third consecutive U.S. Open title and sixth in her career. She won her first one 15 years ago. She is arguably the most dominant tennis player, and perhaps the most dominant athlete, in history.

Watching her beat Wozniacki yesterday was uncomfortable, because Wozniacki’s defeat was so total. And yet it was strangely comforting, because Williams’s win was so complete. You knew what was coming, and this time, finally, it came. Serena didn’t play her best, at least in the first set — she had 23 unforced errors, and made only about a third of her first serves in the first set and only about half for the match — but it didn’t matter. In fact, it was almost hard to notice. She put so much pressure on her opponent’s sorry serve that Wozniacki had to spin it in at low speeds and had trouble placing it outside of Serena’s long reach. By the second set, Wozniacki was engaging Williams in longer points, but it was like watching a cat toy with a mouse. Williams stood at the center of the baseline and ran Wozniacki from right to left, to left, to right.

She filled her side of the court, while across the net Wozniacki seemed a small creature in endless space. Two steps seemed to take Williams to the tramlines, while Wozniacki seemed to have to run three miles to reach balls that skidded along hers. In fact, Williams had to cover about half as much ground as Wozniacki each point. Williams was so totally in control that after she won and began to sob. I had to remind myself that it had been a year since the best player had won the biggest match. 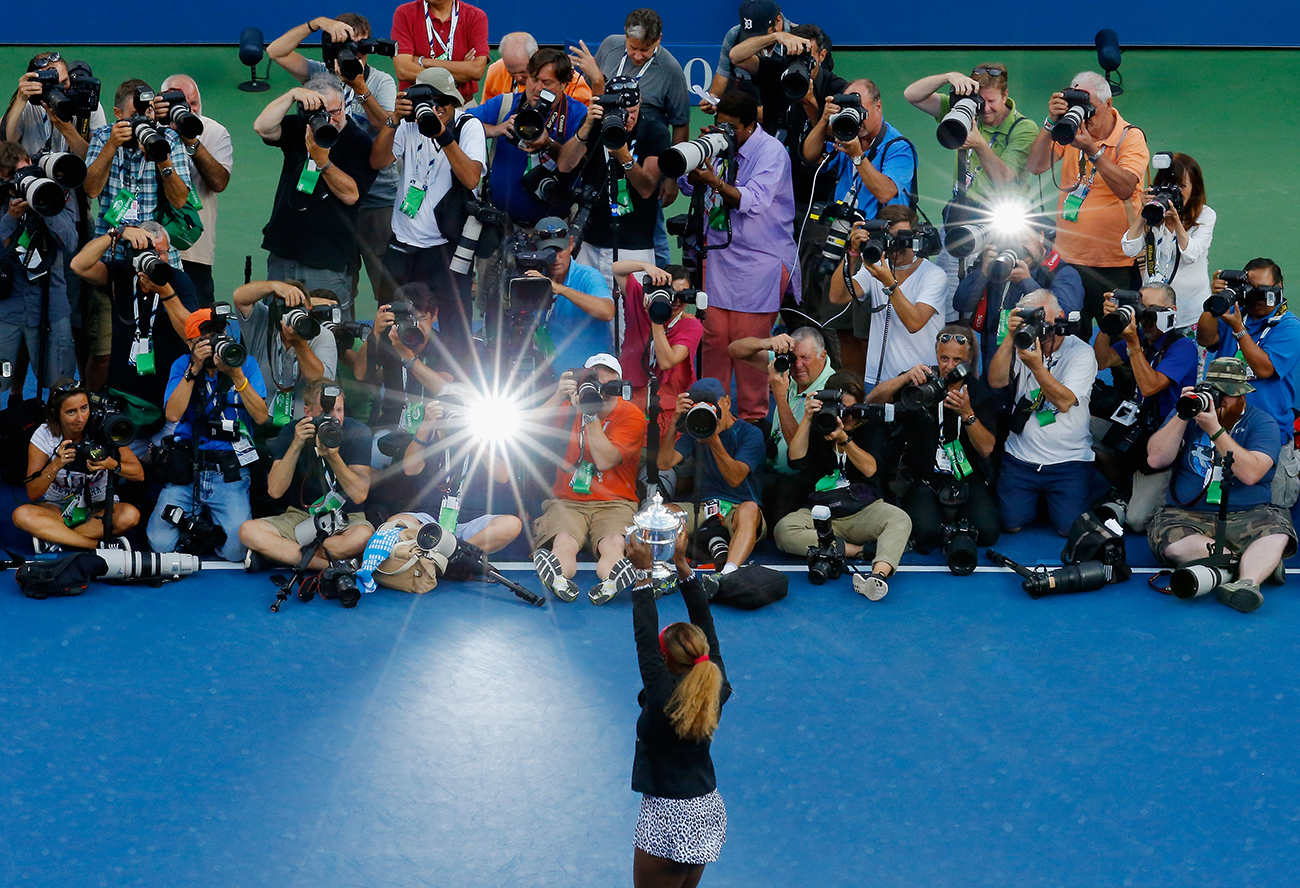 All this — the winning, the wandering in the wilderness, and then the resurgence — is really familiar stuff. The arc of her career is a series of sine waves. Or at least that’s how it can seem. Look closer, though, and the variation seems more apparent. When she was gone this year, it wasn’t because she had walked away or had been injured, but because she had lost. I had begun to take her consistent godliness for granted. Now, she seemed almost human, newly vulnerable. Even the odd glimpses of her private life, which for so long was often decried as distracting, intersected with the sport — her complex relationships with her coach, her hitting partner, her father. When she faced her sister in Montreal, they played one of their best matches, for once able to face each other as great competitors. This summer, after the disastrous showing at Wimbledon, Williams played three tournaments in a row — the first time since 2007 that she had played tournaments in three consecutive weeks — and won two of them. When her hitting partner, Sascha Bajin, took her to his native Croatia, she went to the beach and ate gelato, but they were there to train. These days, even her little dog seems to live on court.

She had a terrible year. She can’t erase the losses; she can’t undo what’s done. But with her angles, her balance, her drive, her power, her determination, she has always had the capacity to change the dimensions of space. She can redraw the lines around her. This summer, she seemed to make her world a little smaller, more court-size, so that, in another sense, it might become a little bigger.

Before the tournament, a reporter asked her what the number 18 means to her — the number of major titles she would have if she won the U.S. Open. “It means legal to do some things,” she said with a laugh. Then she added, “It also means legendary.” When pressed, she demurred. “Oh, yeah, I’m definitely legal. Legendary? I don’t know. I’m just Serena,” she answered. Just Serena. More than enough. 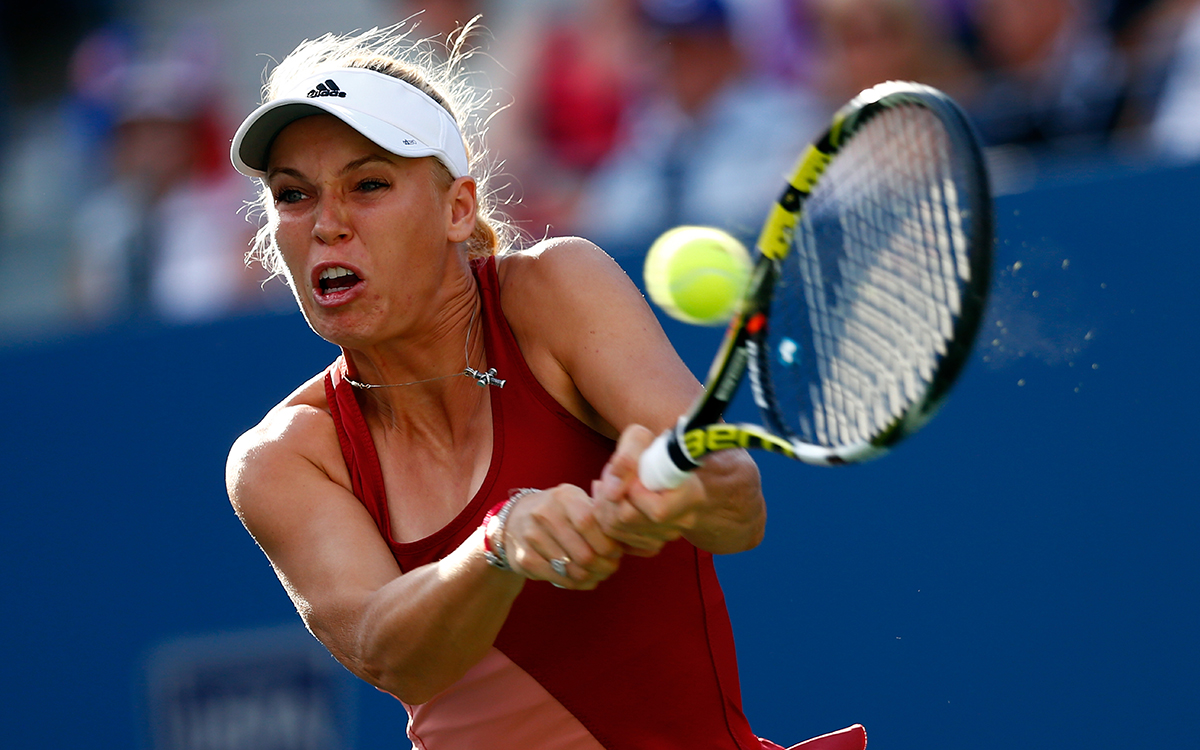 For so long, Caroline Wozniacki was described as so many things Serena was not. She became almost a character in contrast. She radiated a kind of uncomplicated brightness. Her nickname was Sunshine or Sweet Caroline. She spent 67 weeks at no. 1, but her ranking was usually qualified as “slamless.” She racked up ranking points by winning smaller tournaments. Few considered her the best. Her style was defensive — she was a counterpuncher, a retriever. She sometimes hunched instead of getting low with her legs, and her shots lacked impressive power. She had a way of catching the ball with her racket and wobbling it back. When people talked about a weak era in the women’s game, they talked about her.

Her fall in the rankings — she dropped as low as 18 earlier this year — coincided with Williams’s return to dominance. It seemed like order was restored. Soon, people stopped talking about her as a tennis player at all, and instead as Rory McIlroy’s girlfriend and then fiancée. When they broke up, Sweet Caroline became known as Poor Caroline, the jilted bride — and, soon, after a week of partying in Miami together (well documented on Instagram), she became known as Serena’s good friend.

Their relationship seems totally real, not a media invention. They seem to get a kick out of each other. When they talk about each other, they sound delighted and warm. After she lost, Caroline joked in her on-court interview that Serena owed her a drink; judging from Instagram, Woz didn’t have to wait long to get one. From the size of her smile, you might have thought both had won. Wozniacki is unthreatening to Williams. She is young and sweet and has a kind of awkward, charming quality — the kind of beautiful girl who cries when animals are hurt but not when she trips and skins her knee. For her part, there were things about Caroline — the experience of suffering private trauma in the unblinking public eye; the desire to defy common expectations; the complicated relationships with coaches who are fathers — that Serena was in a unique position to understand. Plus, hurt hearts want healing friends. Still, when Wozniacki reached the finals, there was something about the way their friendship was played up that made me feel a little queasy. Woz had been Rory’s girlfriend and then his ex. Now she was Serena’s sidekick. She was hardly ever talked about as a tennis player.

The easiest way out of this narrative was obvious enough: beat Serena Williams in the final of the U.S. Open. She seemed to have a shot. This summer — as every single story about her pointed out, ever since her breakup with Rory — she has been playing fantastic tennis. Her serve had been bigger. Instead of her normal cross-court patterns, she was opening the court with down-the-line shots. She was stepping into the court and slamming the ball. She beat Maria Sharapova at the U.S. Open, out-gritting the toughest, most desperate three-set player on tour and adjusting her tactics mid-match. She has been training for a marathon, and her unholy endurance showed. She was playing the best tennis I’d seen her play. In her last two matches against Williams coming into the U.S. Open, Wozniacki had pushed her to three sets. She almost seemed to have a chance.

Instead, Wozniacki played a terrible match. She didn’t hit a single groundstroke winner until the final game.

It might have been humiliating — the Live Your Best Life story gone wrong. Instead, at the end of the match, just points away from losing, she played two points I won’t forget — one that ended with that groundstroke winner, and the other, a 26-shot rally, that ended in error. The size of the court she had to cover seemed to grow bigger with each of Serena’s shots. She wasn’t in control. Still, she kept running. I hope she doesn’t soon stop.