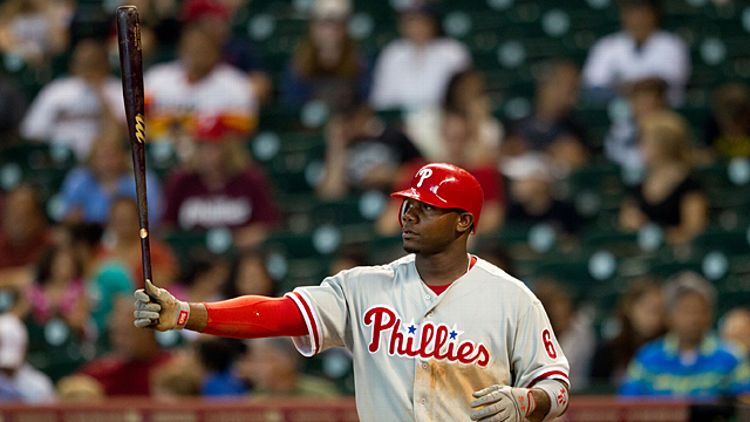 Baseball is the most cinematic of our major sports but it rarely follows a script. With dozens of individual matchups, hundreds of pitches, and countless loogies, the national pastime lacks the simple, dependable narrative thrust of Montana-to-Rice or Paul-to-Griffin. Like a Bourne sequel, you sort of have to find the story in the editing room.

Last night, though, in the midst of the Crank-as-directed-by-Terence-Malick slow motion heart attack that is the end of this lousy Phillies season, a beautifully retro blockbuster emerged. Jimmy Rollins — who hasn’t stopped sprinting since being benched for jogging — led off the game against the Mets with a firecracker home run. Rookie thumbhead Matt Harvey then proceeded to Benihana the patchwork, Iron Piggish lineup for the next seven innings. It was a dispiriting sight for fans busy spackling the holes they punched in their rec room walls during the horrific, hope-murdering Houston series last weekend, not to mention for Cole Hamels, the world’s wealthiest capri pants model, who couldn’t buy a second run if he’d waited for a contract from the rogue Super PAC formerly known as the Dodgers. (It was probably pretty chill for replacement bros like Kevin Frandsen who have one foot in the clubhouse and the other in the Red Bull lounge at Lake Havasu, not to mention for the guy he replaced, Placido Polanco, who has been medically dead since early 2011.)

Down to their last strike in the top of the ninth, you’d be forgiven for thinking the team’s miniscule playoff chances were finally as deceased as their former third baseman. But then Chase Utley, balsa wood knees and all, took ball four. And then Ryan Howard, he of the achilles heel stitched together with melted Subway provolone, the multi-million dollar pariah weighed down with an impossible contract and the even more impossible expectations that come with it (and, it must be added, the anemic .225 batting average), did this:

I don’t know if I believe in miracles but I believe that not even Thor, Son of Odin and his magic hammer could have hit a baseball any harder. (Said Howard afterwards: “I blacked out.” YES YOU DID, SON!)

Sometimes baseball really can seem simple. If the Phillies are going to win anything other than our sympathy, this is how you draw it up: Rollins-to-Utley-to-Howard. Screw you, Jobu — and reality! They’ll do it themselves.