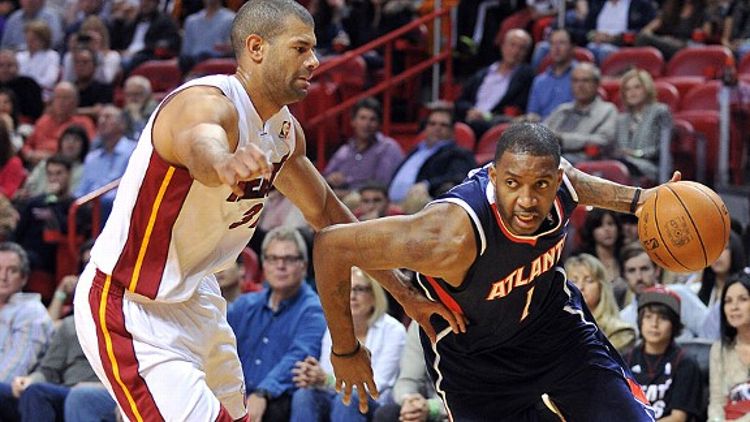 If you’ve never had the experience of finding out that Tracy McGrady is on your team, you haven’t lived.

I remember reading the awkward news that my team, The Atlanta Hawks, responded to the lockout ending by signing Tracy McGrady to a 1-year contract, but it didn’t really register (Blagojevich had been sentenced earlier in the day and I can only handle so much heartbreaking news at a time). Anyway, it wasn’t until three of my friends and I (referred to as the “Quadpod” from here on out) were at the first Hawks home game last week and heard the announcer say “Now entering the game, in his Atlanta Hawks home debut, #1 TRACY MCGRADY” did it fully sink in. The expressions on the faces of the Quadpod:

Bradley: “No! Yes? Why? Huh? I need a drink.”
Jimmy: “OMG, it’s a ghost. A tall, black ghost. Wait, I never thought about ghosts being black. There must be black ghosts, right? Note to self: look into this further when I get home.”
Josie: “I mean, he’s still kind of cute, right? Right?”

As for me, I clearly heard what the announcer said, but all that registered was: “Now entering the game, The Sultan of Suck. Your favorite parasite’s favorite parasite. Mr. ‘My Team Will Excel Once I Get Injured’ himself, Tracy McGrady…”

These four reactions sum up the career and legacy of Tracy McGrady, easily one of the most puzzling and difficult characters to describe in NBA history.

Some things I never would have guessed were true about T-Mac:

On the other hand, what I will never forget about TMac:

While it’s going to take a while for Tracy to kick his “me first, team second” reputation that has unfairly haunted his above-average career, this season could be the start of this process with last night serving as the launch party.

Last night, on the same court as LeBron James, Dwyane Wade, Chris Bosh and Joe Johnson McGrady stood out as the game’s most impressive player. He put up 13 of his 16 points in the 4th quarter and threw a late game alley-oop from behind the arc to the freak that is Josh Smith. Oh, and the Hawks beat the Heat, in Dade County, giving them their first loss of the season.

Atlanta might finally be the perfect fit for Tracy to shake his demons and simply be what he is: one of the most prolific scorers of his generation. He might also be the piece of the puzzle that the ever-average Hawks have been looking for. For years, they’ve been attempting to bring in that person that can help Joe Johnson get the Hawks past the other beasts of the East. For years, they’ve tried and failed in getting that premier point guard or a big man some semblance of hand-eye coordination. Instead, they got Tracy McGrady, and that might have been the most accidentally genius move the team has made in years.

Yes, I know the season is in its early stages and there’s no telling what type of long-term impact Tracy will have. But with no pressure on him and coming off the bench for a team who’s fans will always expect the worst, this could finally be Tracy’s moment to shine.

Parasite no more, Tracy. Welcome to the world of symbiotic relationships. The water’s warm.