I Lost to Redfoo: A Tennis Story 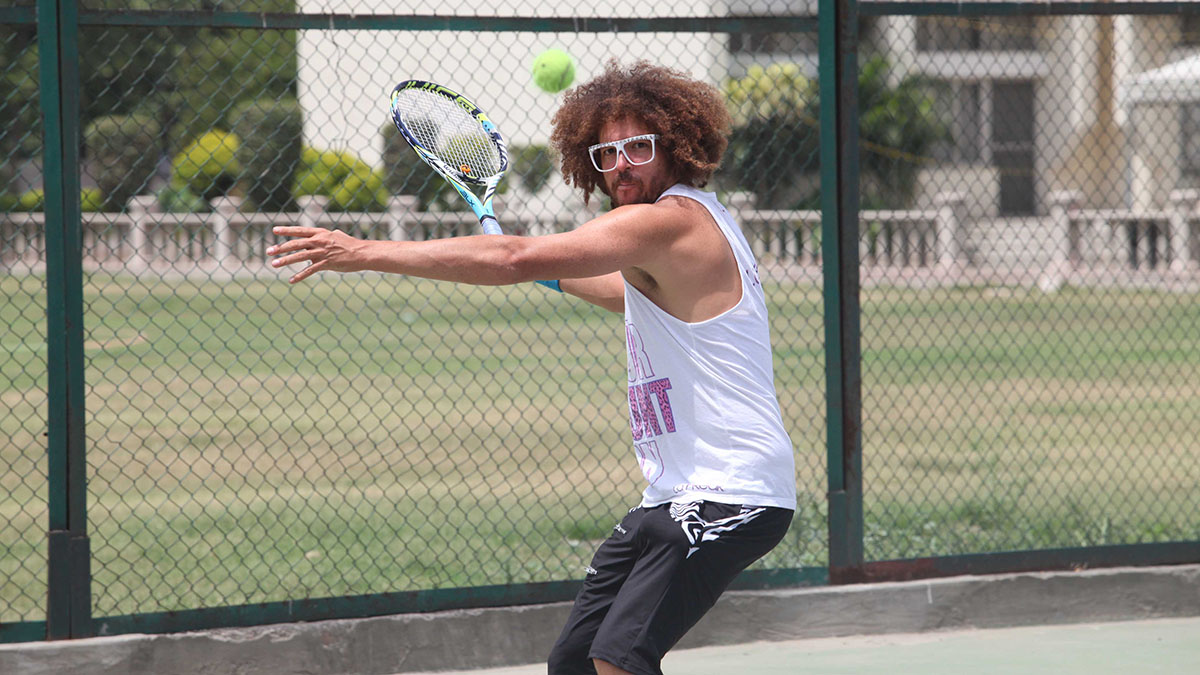 “God, I hope I don’t fucking lose to Redfoo,” was my exact thought when I saw the draw for last week’s U.S. Open qualifier at the Chamisal Tennis and Fitness Club near Salinas, California. This was the Northern California regional of an annual countrywide tournament, open to anyone, for a spot into the real U.S. Open. It’s one of the best ideas the United States Tennis Association has ever had. Thousands of people enter for a Hunger Games–style competition from which only one man, one woman, one mixed doubles team, and two same-sex doubles teams (a new category this year) emerge victorious.1 And one of my opening doubles opponents was Redfoo.

Are you familiar with Redfoo? His given name is Stefan Gordy, and he’s the son of Motown Records founder Berry Gordy, Jr. But Redfoo is more widely known as the flashier half of the duo LMFAO, best known for recent American classics like “Sexy and I Know It” and “Party Rock Anthem.” He went solo in 2013 and his recent work includes “Juicy Wiggle.” Tennis fans may also remember that he once dated two-time Australian Open winner and former world No. 1 Victoria Azarenka.

Redfoo has Sideshow Bob hair and is the proprietor of LaFreak, a line of tennis clothes that would make ‘90s-era-bleach-and-neon Andre Agassi blush,2 but he’s not a professional tennis player.He played the same tournament two years ago, losing in singles in the first round (6-1, 6-2) to a Fresno City College player. Here’s a YouTube clip of Redfoo subbing for Azarenka for a point in an exhibition against Serena Williams a couple of years ago. Draw your own conclusions.

And now let me briefly lay before you my own tennis bona fides. About 20 years ago I played college tennis at an excellent D-III program (a bit of an oxymoron, I admit). I neglected the sport for many years while I lived in Manhattan, where playing tennis is inconvenient and expensive and there are other things to do. But since I moved two years ago,  I have been playing against promising juniors and ex-Division-I players three or four days a week.

I submit, humbly, that I’m better at tennis than Redfoo.

The match was scheduled for last Thursday afternoon on Chamisal’s center court — the U.S.T.A. had fully embraced the Redfoo experience.3 By then, Redfoo and I had already washed out of the singles competition. Both of us had won our first-round Wednesday matches. Later that day, I faced eighth seed Eugene Muchynski, an ex-college player in his early twenties. He won, 6-1, 6-2. But when he was serving out the match at 5-2, I was up 15-40. Two break points. It should have been closer is what I’m saying (along with every tennis player who has ever lost).

Meanwhile, Redfoo lost 6-0, 6-1 to 14th-seed Andrew Ton, a rising high school junior, ranked 49th in the country in his age group at the time of the tournament.4 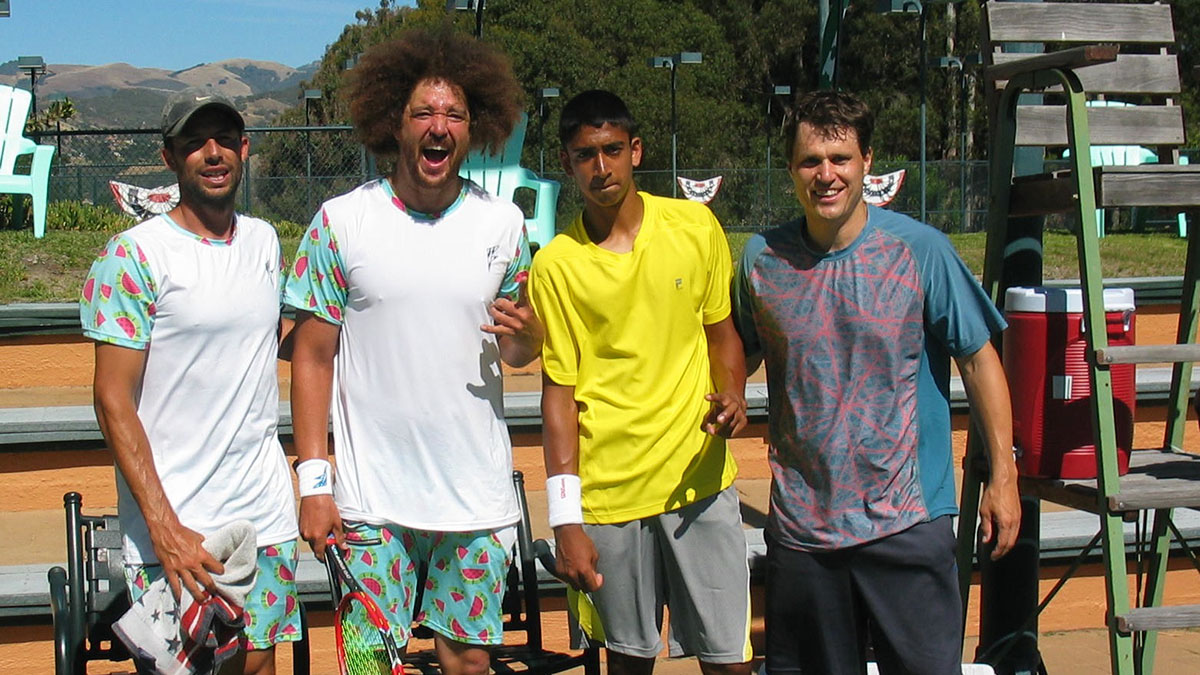 Center court. Five minute warm-up. But this is not singles, so let me introduce our partners. On my side, a rising high school junior out of Union City, Rishab Sardana, with a hard serve and a very solid baseline game. The tournament director had put us together. If there’s a weakness to Sardana’s game, it’s related to a generational decline in volley skills.

In Redfoo’s corner, his friend Lester Cook. Heard of him? At the time of our match, the Tennis Channel wasn’t showing action from Chamisal. It was broadcasting the Gerry Weber Open, where Kei Nishikori, currently ranked No. 5 in the world, was tuning up for Wimbledon. Plug “Lester Cook” into YouTube and you’ll find a clip of him, five years ago, engaged in a very close match against Nishikori. Cook’s an ex-pro, only 31, and not long ago was ranked in the world’s top 200 in singles and higher in doubles.

So hitting to Redfoo was our plan.

Cook held his serve easily. I don’t recall him being a huge server on the pro tour, but then I never played on the pro tour. He had a nasty slice out wide on the deuce side that slid by Sardana for an ace. He aced me down the middle in the first game, too. But we weren’t counting on breaking Cook. All we had to do was hold serve and break Redfoo’s serve, which seemed even more promising after he double-faulted twice in his first service game. But then he served a screamer down the tee. I had seen this serve before. Go back to that Serena-Azarenka YouTube clip. Redfoo’s first serve in that stunt was inches from an ace.

Redfoo held, and our first few service games were a struggle. It was tough to win points serving to Cook. His one-handed backhand was a thing of beauty, and if he got to see a second serve (my weakest shot) he’d step in and hit a massive forehand at my shoelaces or down the alley past my partner at the net. And after hitting a couple of dinky slice returns — we were targeting Redfoo’s backhand — Redfoo started returning aggressively. Sometimes he missed badly, but he also ripped a few balls, especially if he had time to run around and hit a forehand off a second serve. If we lost a single point serving to Redfoo we were in trouble, especially given the doubles scoring format: At deuce, the next point wins the game and the receiving team chooses who returns. Cook always returned.

All of a sudden, we were down 4-1. And the crowd, maybe a hundred strong, was decidedly behind Team Redfoo. When they won a point, no matter how unspectacularly, there was spirited applause and even yelps of “LaFreak.” But when my partner hit a screaming forehand winner by Cook or when I landed an improbable stretch volley, there was only silence. Our only supporters were Sardana’s father and younger brother, and they weren’t going to out-cheer the LaFreaks.

We fought back in the first set, but lost 6-4. Still, by then we had better adjusted to Cook’s powerful shots. I felt pretty confident we could turn it around. And after falling behind an early break in the second set, we fought back to force a tiebreaker, even breaking Cook’s serve.

The tiebreaker began poorly. I placed a kick serve to Redfoo’s backhand — but by this time he must have known that’s what was coming. He replied with a one-handed drive that handcuffed me as I charged to the net. And then Cook won his two serves. Up 3-0, they cruised to a 7-3 win. As we shook hands at the net, all I could think of is that my friends were never going to let me live down this loss. Meanwhile, Sardana asked Redfoo and Cook for autographs.

After the match, in my conversations with the victors, I began to feel better about the loss. Cook, who coaches out of Los Angeles, said my partner and I were good players, a nice compliment from an ex-pro. And it turns out Redfoo had once been a promising junior player in California, which is when he met the Cook family and trained with Lester’s older brother, Jason, who played at UCLA and briefly in the pros.

“I actually spent a year training in Sweden as a teenager, until I got hurt and began concentrating on music,” Redfoo told me. He said he’d been playing with Lester almost every day for the past few months leading up to the tournament.

Redfoo and Cook lost their next match. After our own battle, I had asked Redfoo if I’d see him at the tournament again next year. “I don’t know,” he said. “I don’t want to get into the U.S. Open through the back door. I want to earn it.”

Redfoo told me that he was prepared to play Futures tournaments — the tour’s lowest level, but still featuring top 500-ranked players — in far-flung locales to try to get a professional ranking, “My goal is to win a single A.T.P. point,” he said, meaning he’d have to win a match at a Futures event.

This, frankly, is preposterous. It’s by no means assured that the teenager who trounced Redfoo the previous day will ever win a professional point. Redfoo, at 39, has no chance. Even to make it through the qualifying draw at a Futures event is a tough ask for very solid college players. A few months ago, ahead of a Futures tournament in Bakersfield, I tried to qualify for the qualifying tournament, but lost badly in the first round of this pre-pre event.

But I can relate to Redfoo’s delusions. I, too, have thought about trying for that single A.T.P. point — perhaps I’d even write an article or book chronicling my quest. I’ve since come to accept that it’s impossible. Even someone like Cook, just 31 and the best player with whom I’ve shared a court, has made peace with the reality that his true playing days are over.

But not Redfoo. And I doubt anything I write here will dissuade him. After all, in Redfoo’s very successful musical career, there must have been plenty of naysayers en route to the Juicy Wiggle.