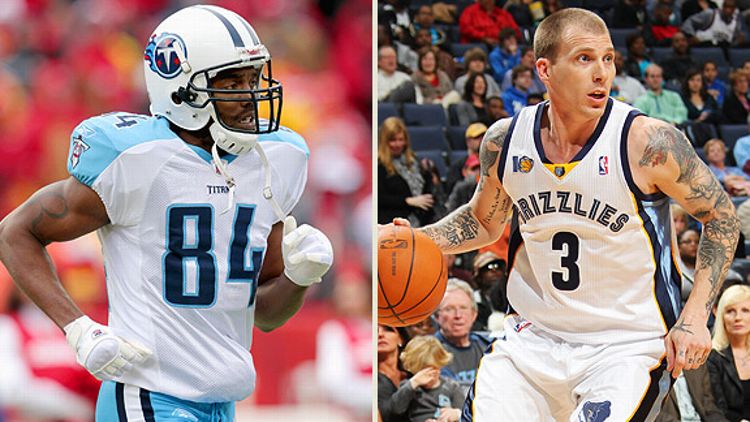 In addition to having hilarious middle names, Moss and Williams famously came up together in the early ’90s at DuPont High in Belle, W.Va. (they were teammates for two seasons, leading the DuPont basketball team to the state finals in 1994). Moss and Williams’ coming together was one of those things that, if it happened now, conspiracy theorists on Twitter would accuse it of being a contrived marketing campaign. Two mercurial rednecks from coal mining country, one white and the other black (they could probably guest host PTI next week), who stayed true to their roots for better and (mostly) worse; they both had equally head-scratching careers, shared one of the five best Nike commercials ever, and retired within a few months of each other. We may never see a phenomenon like this again. More should be made of this.

Although Williams was no slouch talent-wise, he and Moss don’t really belong in the same conversation. Moss retires as the most physically gifted wide receiver to ever put on cleats. Bobby Bowden put it best: “He was as good as Deion Sanders. Deion’s my measuring stick for athletic ability, and this kid was just a bigger Deion.” Along with Bo Jackson, Deion, and Allen Iverson, Moss completes the Mount Rushmore of freakish modern-day athletes who could have played any sport they wanted (LeBron James is obviously in the conversation, but he’s more like a high-speed bulldozer let loose on the NBA; he lacks grace).

When Moss burst onto the NFL scene in 1998, it was like watching a wide receiver from another planet. He was 6-foot-5, ran a 4.25 40, and made one-handed circus catches that defied physics. He instantly led the Vikings to a 15-1 regular-season record and an NFC championship playoff run, scared the bejesus out of every defensive coordinator in the league, and even prompted teammate Cris Carter to gush that Moss could be better than Jerry Rice, which was roughly as blasphemous as Larry Bird once proclaiming of a young MJ, “That was God disguised as Michael Jordan.”

And yet it’s easy to forget now that Williams’ arrival in the NBA was, at the time, just as electric. Drafted seventh overall in 1998, Williams helped transform the revamped Sacramento Kings into the league’s most exciting team and an instant playoff contender. Back then, he was more carnival showman than basketball player, hopping around the court like a jackrabbit, all sleight-of-hand and behind-the-back passes. The average fan’s gateway to the AND1 streetball culture that had been percolating underground. The Pistol Pete comparisons were unavoidable, but there was an undeniable racial factor to his popularity. Would Williams crossing up Gary Payton have led SportsCenter had he not been a baby-faced white kid with a ridiculous haircut? Maybe.

The irony is that Williams would later develop into a reliable floor leader for the Memphis Grizzlies under Hubie Brown, peaking as a championship point guard for the 2006 Miami Heat. He went from relatively unknown to overrated to underrated, all in the blink of an eye. In retrospect, White Chocolate was a poor man’s Mark Jackson.

The similarities aren’t limited to their roles in their respective sports, but extend to their extracurricular activities, as well. Moss was dismissed from Florida State for testing positive for marijuana while on probation. Williams was permanently suspended by Florida for drug use after three previous suspensions. In 2005, Moss pantomimed mooning Packers fans after a touchdown, nearly causing Joe Buck to have an on-air seizure. Williams was twice fined for yelling racial slurs at fans. Moss was notorious for taking plays off, and once left an undecided game with time still on the clock, bizarrely explaining that he didn’t think the Vikings would recover the onside kick. Williams once said after a loss, “I’m happy. I go home and see my kids and my wife and I’m OK. All of this shit is secondary to me.” And, most recently, though it’s surely a coincidence, Moss retired within just a few months of Williams — cosmically, I think he knew.

It’s funny that their retirements should make me feel so nostalgic, seeing as how neither Moss nor Williams ever seemed to regard being a professional athlete as anything worth getting nostalgic about in the first place. Thirteen years ago they flew in like bats out of hell doing whatever it was they wanted to do, and they left the stage just as abruptly. All the while, neither of them pretended to be anything they were not. I can respect that.

Kevin Cott is a freelance writer and attorney from Atlanta. You can follow him on Twitter at @kmcott

Previously from Cott:
A Lawyer’s Verdict on Franklin & Bash