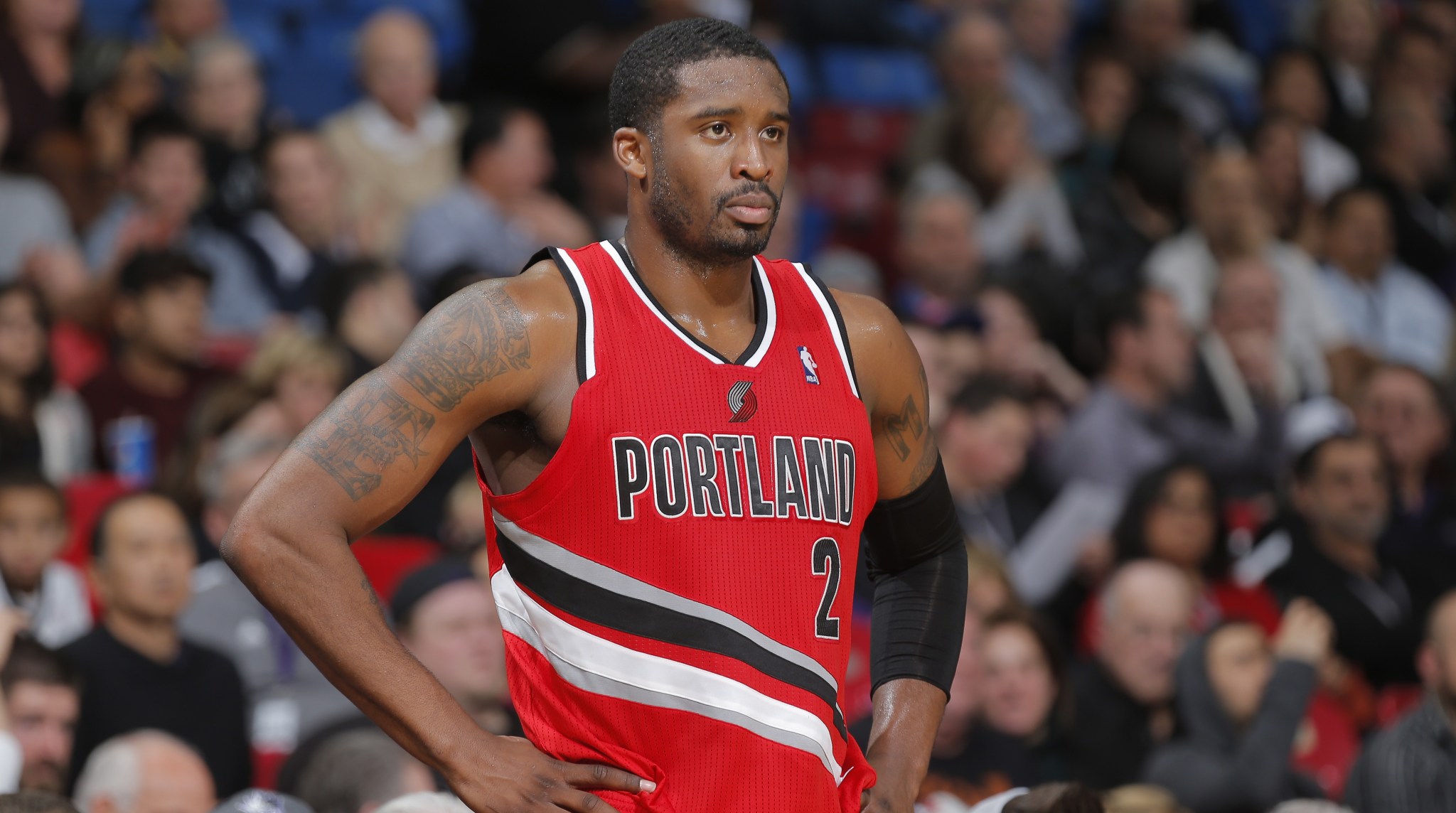 Wesley Matthews keeps transforming himself as an NBA player, and his transformation has been key in Portland’s unexpected leap from lottery fodder to top-tier Western Conference team. He came into the league an undrafted spot-up guy with uncertain spot-up credentials, and he has developed into one of the league’s deadliest outside shooters. Along the way, he keeps adding things — some off-the-bounce creativity, whip-smart cutting, lefty floaters, and, most of all, a bruising post-up game.

Matthews posts up a lot these days, and he has become shockingly good at it. He ranks 13th in points per possession on post-ups among 82 players who have finished at least 50 such plays this season, per Synergy Sports. Names below him on that list: Blake Griffin, Carmelo Anthony, Dwight Howard, Al Jefferson, David Lee, DeMarcus Cousins, Joe Johnson, Kevin Love, and even Matthews’s All-Star teammate LaMarcus Aldridge. And Matthews isn’t pulling off this efficiency on some token tiny number of post-ups. He hits the block nearly as often as LeBron James, per Synergy.

Matthews sat down for a one-on-one with Grantland after Portland’s shootaround in New York on Wednesday.

Did you ever expect your post-up game to become a weapon to this degree at the NBA level?

I knew I had the post game, but as far as the effectiveness of it, I guess that’s just a tribute to my work in the offseason.

The Blazers for the last couple of seasons have run that little play where the ball is at the elbow, and you flash from the corner into the middle for a really quick post-up. That was cute. But now you’re doing all kinds of things on the block. You fired off a couple of Dirk one-leggers against the Wizards the other night. Have you always had that shot?

I’ve had that for a while! I just haven’t done it. It’s hard — the past couple of seasons, I’d probably get one or two post-ups a game if it was a blatant mismatch that everyone in the arena saw. And if I make it, they might come back to it. If I don’t make it, they’re not gonna come back to it. But now, that’s a way that coach and this team is getting me involved — putting me on the block.

You hit two lefty floaters in another recent game. I mean, that’s a tough shot in the paint.

Yeah. I beat up on Hawk — Hersey Hawkins — all the time.

Ha. He’s the sacrificial lamb on the coaching staff?

Yes, he is. He would say otherwise, probably. But I go to work on him.

He was a crafty scorer in the league.

That he was. He scored a lot of points.

At the beginning of the season, the expectations around you guys were “Let’s make the playoffs and see what happens.” Then you got off to this roaring start. Does that change your expectations right away? How do you deal with that? Do you really just focus on the next game?

We gotta take it day by day, as best you can. I mean, it’s easy to say that. Everyone says that. But, honestly, of course you think about the future. You think about what could be. But you have to put that on the back burner, because there’s still a lot of basketball to play. Anything can happen. We have to continue to find the place we were when we won those 11 straight, and get that back.

Does it grate on you guys when some people say a jump-shooting team can’t win the title?

I don’t buy the jump-shooting thing, by the way. Dallas just won the title in 2011 with a team very much like this one. You guys take good jump shots.

If you take good shots, and we can still get into the bonus, man, we can score. We’ve shown we can play defense at the highest level, and beat the best teams. So it’s just a matter of doing that consistently.

Your defense, if you go by points allowed per possession, is something like 22nd or 23rd. How do you improve it, to the point where you could realistically win three or four playoff series?

For us, it’s really just an attitude, man. It’s just going out and doing it, because we’ve done it. I mean, we’ve done it in the last game of a five-games-in-seven-nights, in the fourth quarter, when we were down. We might have lost the game, but that was our best defensive quarter.

I vaguely remember that. Which game was that?

Against Minnesota [on December 18]. They had us down close to 40, and we came back within six or eight. How does something like that happen? That’s the last quarter of the last game of the longest road trip of the season. It’s a mental thing. We know we can do it.

Coach Stotts over the summer revamped your defense to be a bit more conservative. The bigs hang back on pick-and-rolls, and you guys on the perimeter stay very close to 3-point shooters. Do you ever find yourself itching to drift off those shooters a little — to dive into the paint and go for a steal, or just hit somebody?

Oh, man. Myself? I definitely do. I get caught on film doing that — over-helping, and trying to be a little too aggressive. The principles are solid. We want to force the toughest shot in the game, which is the contested 2-pointer.

Do you want to be in the 3-point shootout at All-Star Weekend? Have you reached out to the league about it?

Would you do it?

I carry zero weight, but you made my chosen six-man field. There are a lot of good shooters these days, though.

If not, I’m gonna go back home. I’ve got a lot of people I want to see back home. I’m going to relax, and recharge my batteries. And I’ll play that snub card very well.

[Editor’s note: Matthews was not included in the field for the 3-point shooting contest, which was announced Thursday night.]

You do have a chip on your shoulder. You’ve come at me on Twitter a few times when you didn’t like something I wrote.

When did you get that chip? After you went undrafted, or before?

On defense, you guys shift things around a lot, so that Nic Batum defends point guards, and Damian Lillard will move over to a shooting guard. That leaves you dealing with small forwards, and some of them are a bit bigger than you. Do you like that assignment, though?

Do you ever look at the schedule, see the opposing small forward, and just think, Man, this is gonna hurt?

I mean, I know this game — going against Melo. He’s a physical player. LeBron’s physical. But there’s no one in this league that I fear.

What happened to the 3 goggles?

You know, that kind of went away with Patty Mills.

I couldn’t remember who started that — Patty or Rudy Fernandez.

Yeah. It was both of them, but it just went away when they did.

Stotts’s system looks to have been very good for you and Nic, in terms of broadening your games. You both move around the floor more, work off the dribble, and Nic is racking up assists like a point guard. What makes it work so well for you?

So you have a general structure, but you’re free to make reads within that structure.

Exactly. It lets you be a player, rather than a robot.

It has really opened up your game. There was a time when people, including me, asked whether you were going to be a spot-up guy, or whether you could do more than that.

I can do a lot more. This is nothing. We’re just scratching a little bit of the surface right now.

But there’s not fighting with you guys, with the Bourré?

I’m chill. I’m laid-back. I’ll order a movie, or maybe I’ll go out to eat if I know some people in the city. Other than that, I’m laying back and catching up on Revenge.

That’s your show? I haven’t seen that.

Is the chemistry really as good as it looks on this team? Are you guys really having this much fun?

We really are. Winning helps with all of that.

Here’s one solution to the National Football League’s concussion problem: Stop playing at sea level. Researchers have found that concussion rates are about 30% lower in games played at higher altitudes.

The suggestion of shadowy forces trying to thwart his efforts is a common theme in Calipari's career. From Massachusetts, where he debuted as a head coach at age 29, through time with the New Jersey Nets, Memphis and now Kentucky, he's compiled an enemies list that would make Richard Nixon proud.