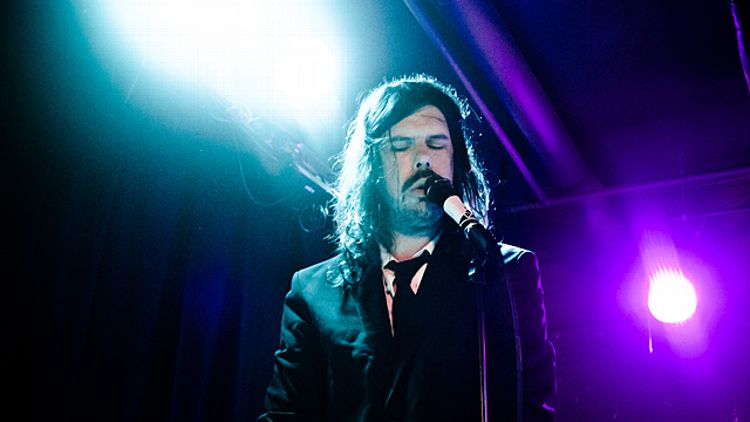 In terms of the art rock world, Liars are a “band’s band.” They’re critically acclaimed, musically daring, and only slightly off the mainstream radar despite having no intention of putting themselves in that position. They’re the kind of group Radiohead usually wants as an opener (a true sign of admiration and perhaps secret envy), and a constant presence whenever other bands make their own year-end lists.

If you’re unfamiliar with the shapeshifting trio’s unprecedented career arc, here’s a summary. In 2001, they were part of the New York post-punk scene that birthed LCD Soundsystem, Yeah Yeah Yeahs, and the Rapture, and their debut, They Threw Us All in a Trench and Stuck a Monument on Top, positioned them as the most volatile and abrasive of the bunch; that record’s final song turns into a 30-minute loop. Three years later, they decamped to a New Jersey cabin and made They Were Wrong, So We Drowned, a shocking left turn where they completely ditched the wiry guitars and catchy, shouted hooks for murky electronic drone and lyrics based on the Salem witch trials. Rolling Stone gave it one star, which maybe happens once every five years; Spin granted it the lowest possible score and called it “unlistenable.” Liars holed up in Berlin to make their masterpiece, 2006’s Drum’s Not Dead, an eerie concept record/drum circle of an LP.

It was considered far more accessible than its predecessor. By 2010, they settled in Los Angeles and made Sisterworld, a fairly straightforward rock record mostly centered on the awfulness of Los Angeles.

What I’m trying to say is that all of the above makes it abundantly obvious that Liars are die-hard Clippers fans. How could they not be? Looking at their album titles, you sense that Liars are drawn to doomsaying and human frailty, their artistic trajectory and itinerant lifestyle embracing how nothing is permanent, whether good or bad. That’s the sort of attitude you need for a team owned by Donald Sterling, in which prosperity can seem fleeting if not entirely accidental. Most importantly, they maintain a fairly antagonistic relationship with the city that’s welcomed them, while having no immediate plans to, y’know, move. Why would they?

Lead singer Angus Andrew is quite literally the biggest Clippers fan in rock — the native Australian and recent newlywed is 6-foot-6 and could probably suit up right this moment as a Birdman-like intimidator for Doc Rivers. As a counterpoint to our previous Celtics chat with Daniel Lopatin of Oneohtrix Point Never, Andrew gave us his thoughts on how the Clippers avoided a raw deal, made the best possible coaching hire, and if they can finally put up their own championship banner at Staples Center.

Now that Doc Rivers is a done deal, what does he bring to the table?

Click here for all of our interviews with fascinating people from the worlds of sports and pop culture.
To say “everything” would be an understatement. He’s a top-five coach with championship experience who will garner immediate and faithful respect from the players and organization. In an instant, the Clippers go from talented question mark to legitimate contenders. Not to mention this virtually locked in Chris Paul to re-sign for five years. With Blake [Griffin] already signed for five and now Doc for three — the Clippers’ future has literally never looked brighter. Plus, coupling “Rivers” with “Clippers” allows for all sorts of appropriate analogies!

How much of this year’s playoff failure can you attribute to the coaching style of Vinny Del Negro?

Oh, VDN … Look, I love the guy. He took us from the Dunleavy doldrums to the best season in franchise history. But it’s true, he’s not a strategist. His role was really just to let Chris Paul coach from the floor, which is fine in the regular season, but when it comes to the playoffs you actually need to call some plays! So yeah, though I wouldn’t go so far as to say it was completely Vinny’s fault, I will say that in order for the Clips to become a dominant playoff team in the future it was essential we part ways with him.

The Clippers have been a tremendous offensive team, yet their defense was exposed in the Memphis playoff series. How do you envision Doc Rivers changing the character of the team on this end?

That’ll be one of the real tests for Doc. He’s credited with incredible defense in Boston, but we all know that Tom Thibodeau implemented the system and KG made it happen. Can Doc create the same intensity here for the Clips?

Do you think the Clippers got a proper return for Eric Bledsoe in the form of J.J. Redick and Jared Dudley?

I certainly had hoped for more. Plus, lest we forget, this deal also included Caron Butler and a second-round draft pick! Caron and Bledsoe happened to be two of my absolute favorite players on the Clippers, so emotionally, I took it kinda hard. I was just amazed that the Suns could score Bledsoe and Caron by only giving up … Jared Dudley?! That seems crazy to me.

Still, from a strategic standpoint, I’ve come to terms with the trade. We needed good, solid outside shooters and a proper starter at the 2 spot, so let’s hope it all pans out.

How much pleasure did it bring you to see Dwight Howard leave the Lakers? Or do you think his departure helps the team?

If I was a Lakers fan, I’d be relieved right now. Sure, this upcoming year is going to be a tough pill to swallow. But I think they’re better off without Dwight and his ridiculous max contract. It was obvious he didn’t really want to be in L.A., and if he stayed, it most probably would’ve been based entirely on earning more money.

Former Lakers like Antawn Jamison and Matt Barnes are seeking to join the Clippers, whereas the Lakers desperately signed former Clipper Chris Kaman to be their starting center. Are we seeing a true culture change in Los Angeles basketball?

Absolutely! I hope it lasts.

Are there any missing pieces on the Clippers’ current roster, and if so, what cheaply available free agents can fill them?

I think we’re missing a really good backup big guy. We just re-signed Ryan Hollins, who is nothing to write home about, and we let go Ronny Turiaf, which was a good move. Unfortunately, at this point, the remaining free agents at the 4 or 5 aren’t truly inspiring. I’m not sure we can afford them, but I’d like to see either Brandan Wright or Byron Mullens on our team. Both can stretch the floor a bit, which would be great in combination with Blake.

Are the Clippers a championship team as currently constructed?

I hate to say it, but … no. I certainly think the introduction of Doc Rivers is going to make a huge difference for us. But unless Blake lives up to the hype and becomes an absolute solid and dominant star this season, I think we’ll find it difficult to go over the top. To me, we really need another go-to big man.

Exactly how long do you expect the Clippers to be a championship-caliber team before Donald Sterling inevitably screws this up?

Oh come on now. Look, the man has a bad, bad reputation that undoubtedly is completely warranted. But you have to admit the last few years has seen a marked change in attitude and intelligence. Isn’t it possible that he’s turned a corner and somehow realized that actually paying his employees is a sound strategic investment?