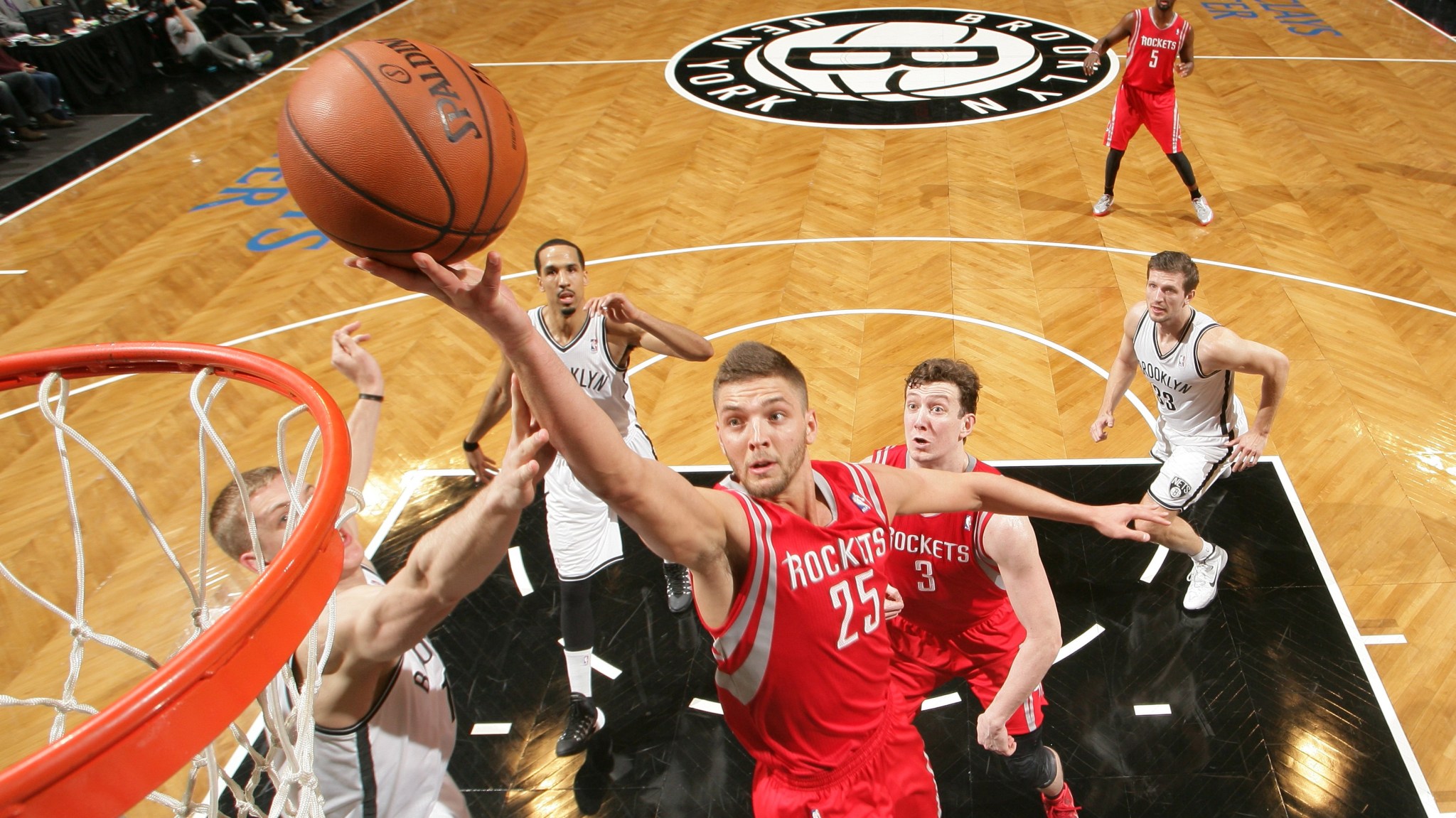 Chandler Parsons is about to become the go-to name for league executives who trumpet the value of second-round picks. He’s a solid third option on the Rockets — a team that fancies itself a title contender — and one of just nine players leaguewide averaging at least 16 points, five rebounds, and 3.5 assists per game. Those are semi-artificial cutoff points, and Houston’s fast pace of play inflates everyone’s numbers a hair.

Parsons has thrived in Houston’s free-flowing offense, and his rise presents the front office with a fascinating little decision this summer. They can decline Parsons’s cheap $965,000 team option for next season and make him a restricted free agent this July — a move that would give Houston matching rights. The other route: keeping Parsons on the books under that team option, and having him become an unrestricted free agent in July 2015.

Daryl Morey, the team’s GM, has been open about seeking another star-level player to augment James Harden and Dwight Howard. It will be interesting to see where that leaves Parsons. The third-year forward discussed that issue, Houston’s goals, and his alleged poker skills during a one-on-one with Grantland in Brooklyn on Tuesday.

Aside from a three-game blip against Oklahoma City, Miami, and Chicago, you guys have basically looked like a title contender for two months. Are you surprised everything has come together this quickly?

No, I’m not really surprised. I do think it’s a process, and that just adding a key player like Dwight — it’s just going to take time to get him fully involved, and to get the chemistry down. But the more we play together, the more comfortable we get. The further we go in the season, the more roles are set, rotations are set.

It’s crazy to think this is just the first season we’ve been together. It just shows how good we could possibly be. Hopefully, we can be together for a long time.

In this crazy Western Conference.

Click here for all of our interviews with fascinating people from the worlds of sports and pop culture.
Yeah. This is as competitive as it has ever been. You’re watching the standings every game. We control our own destiny, so we’re not so worried about that. But it’s fun to see how competitive it is, and how good the Western Conference is.

So you admit to checking the standings? Some people claim to ignore them.

Oh, yeah. For sure. I mean, I’m a basketball fan, so I’m even following the Eastern Conference standings.

Yeah! I watch everything, but especially the West — what’s going on with Portland, Memphis, and Dallas, and how close it is.

It is. It’s going to come down to the wire.

Memphis’s last two games are against Phoenix and Dallas.

That’s what makes it fun. Every game counts the same, but there is more on these games as we get down to the wire. It’s exciting to watch that and see who plays who. Every series is going to be unbelievable, no matter what seed you’re in.

Do you view this team as a real title contender? Are you at the level where you can get through four series?

How important is Patrick Beverley?

He’s very important. You can’t emulate the intensity, the defense, and the energy he brings every single possession. That being said, Jeremy [Lin] has been in this situation before. We believe in him. Isaiah [Canaan] is getting his opportunity, and I look forward to watching him take advantage. We believe in those guys, but we want Patrick back as soon as possible.

The big knock on you guys, justifiably I think, was that there just wasn’t enough perimeter defense here. James’s perimeter defense became a big national story early in the season. Have you guys tightened it up enough to really go far in the playoffs?

We can still improve, but I think the effort is there, and the defensive mentality. We put more focus every day on the defensive end. We understand we have guys that can score the ball. We’re one of the top-scoring teams in the league. We don’t have to worry about that. But we should be able to win when we’re not shooting the ball great. We have to be able to lock up on defense. Especially when we have guys like Omer and Dwight protecting us back there, and Terrence Jones. That should give us wing defenders freedom to be more aggressive — get in passing lanes, and be more physical.

That’s been your thing, though, right — going for steals that maybe you don’t really have a chance to get?

Have you tried to be more selective?

You don’t want to gamble too much. Time left in the possession matters, and whatever is happening in the flow of the game. Knowing those two guys are back there, it does give you more leeway. But you want to stay solid, and make a team beat you in the half-court offense.

What’s one individual skill you’ve really worked on — one thing you watch for on film, when you watch yourself?

I want to be able to guard one through four [point guards through power forwards]. I’ve been trying to get there all year. Tonight, I’m starting on Deron Williams. Last night, I started on Chris Paul. I have to continue to get stronger, guard the post better, guard on pindowns better. With added strength, I think all that will develop better.

One thing I’ve always wanted to ask you: Do you feel lucky you got drafted here? By that, I mean, this system is pretty free-flowing. Right away, you got to run pick-and-rolls, drive into gaps, and try lots of stuff. Not every rookie gets to do that.

Oh, yeah. This league is all about opportunity. That draft night, I was furious. I thought I should have went a lot higher. But I couldn’t have went to a better situation. I couldn’t have went to a team with a better coach for me, with a better offensive system for me. That night was frustrating. But I could have easily went to the Heat or the Thunder and been a bench player. Instead, I was thrown in the fire my sixth game of my rookie year, and I’ve started ever since.

But it’s not just the playing time. They let you really attack, handle the ball, and stretch yourself.

[Assistant coach] J.B. [Bickerstaff] always makes fun of me — they threw me in the fire, and now I try crazy stuff in games. [Kevin] McHale gives me all this freedom to just go out there and play, and stay aggressive. I’ve always believed in myself, and this system — the up-and-down tempo, all the transition — it fits me perfectly. Terrence and Dwight are great for the pick-and-roll with me. It couldn’t be a better spot.

Daryl once told me that last season, you came into his office and asked for a raise.

That you asked if it were possible to renegotiate your contract. Is that true?

I may have done that. That’s just a product of our relationship. I was probably kidding. That’s just the kind of relationship I have with those guys. We’re so open, we’re so close, we talk about everything. I was just giving them a hard time.

They do have an interesting decision with you this summer: make you a restricted free agent now, or wait a year, and then you become unrestricted. You say you guys are open with each other. Have they given you any indication of their plans?

No. I hired Dan Fegan for a reason. I think he’s the best agent in basketball. That’s between him and Daryl this summer. I’m just trying to win as many games as possible. The more we win, the more impact I have on the team, the more likely they’ll figure it out.

Do you miss playing power forward in small-ball lineups? You guys don’t do that as much this season.

Yeah. It’s different. It gives our lineup a different look. I’m good playing against bigger guys, in mismatches, facilitating from the top of the floor, and in the trail spot. It can work to our advantage sometimes. Mac [McHale] will still go to it sometimes when we’re down a little bit.

By the “trail spot,” you mean coming in kind of behind the possession, catching the ball up top?

Yeah, I’ll get the ball at the top of the floor and make a play against a bigger, slower guy.

Clutch the Bear had the video that kind of went viral this season, where he was secretly in his inflatable costume in the bowels of the arena, and scared the crap out of everyone. True or false: You knew it was coming?

Absolutely false. I had no idea that was coming. That reaction was 100 percent real.

True or false: Dwight knew it was coming?

Oh, man! I wasn’t there for his, but his looked fake, so I’ll go with fake.

Did you feel any All-Star-related bitterness, being in the West instead of the East?

A little bit. You look at the conferences, and everyone in the West is having such a great year. There are still great players in the East. But my friends and my family were all, “If you were in the East, you’d be an All-Star.” I don’t look at it like that. I look at it like I’m in a great situation, on a great team, and I’m helping my team win. All-Star is definitely an individual goal, but I don’t put my focus on that. I’m just going to keep working hard until it happens.

Did you go to New Orleans anyway?

Oh, no way. I went to Cabo with my girlfriend and just chilled. Another blessing in disguise, I guess.

Who’s at the table?

And you’re dominating, you say?

Just dominating. I’ve only played like the last five flights. I usually sleep. After a game, like tonight on the flight to Toronto, I’ll rewatch the game, and then we have this breakdown thing called “My Impact,” so I’ll watch “My Impact” on Toronto.

That’s basically film of you against that team the last time you played them?

Yeah. So I’ll rewatch this game, see what I did good, and what I did bad. Then I’ll also watch the last time we played Toronto — “My Impact” will show how I impacted the game.

Wait. So: What are the stakes in these poker games?

What’s your hotel routine? Actually — you had an off day in New York yesterday. What’d you do?

Last night was kinda different. It’s New York City. I had a photo shoot for Ocean Pacific, this surf brand I endorse, with Nina Agdal — she was on the cover of the Sports Illustrated swimsuit issue.

Yeah. I had that from 8 p.m. to 10 p.m., and then I went to a steak house with Dwight and a couple of my friends. Just hung out. Usually I’m so tired on the road, I’ll order room service.

Do you have a go-to television show to pass the time?

I don’t know that one.

Last thing: What do you really want to work on in these last few games? What do you want to see from yourself, and the team?

We just have to finish strong. Last year, we kinda struggled down the stretch. We have to focus. We want to get the highest possible seed, so we’re gonna try to win out. Focus all on defense, and the offense will come.