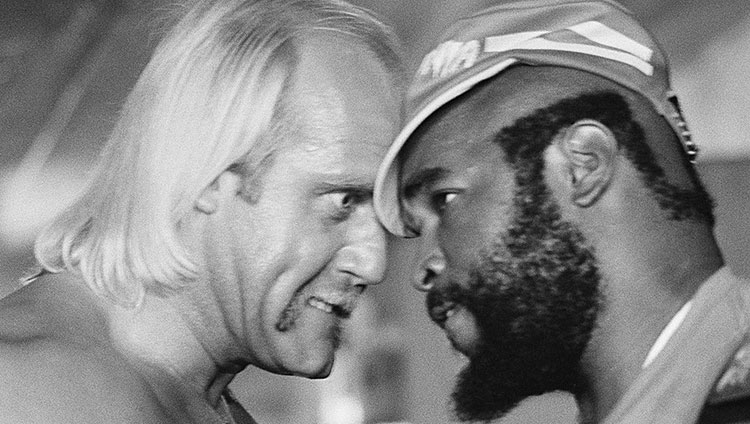 Everybody knows that wrestling is fake, but at least everybody knows it exists. The same can’t be said for Richard Belzer’s talk show Hot Properties, which existed briefly on Lifetime in the ’80s. The program was like a faux–nightclub cabaret, with comedians and actors and Belzer playing himself. He had staged backstage segments with his manager, played by head writer Tom Leopold, that related to the real onscreen proceedings, sort of like the reverse of Jerry’s bumper comedy bits from Seinfeld. The show’s lone memorable moment is likely one that Belzer would like to forget — the night Hulk Hogan put Belzer in the hospital.

On March 20, 1985, 11 days before the inaugural WrestleMania, Belzer hosted Hulk Hogan and Mr. T. Both were staples on the talk-show circuit in those days, donning complementary skintight sweatsuits and weightlifting belts to hype the upcoming mega-event on which Vince McMahon was staking his fortune and legacy.

Mr. T came out first by himself, and by the time Hogan appeared, Mr. T was in a sour mood. To watch Belzer’s stylings now isn’t very shocking, but in that day his snark would have unnerved an unsuspecting guest. “Richard Belzer is the kind of comedian who is described in press releases as irreverent,” opened the New York Times review of his earlier six-episode sketch comedy show on Cinemax, soft-shoeing his Lenny Bruce–inspired, network-unfriendly obscenity. On Lifetime his act was more subdued, but his acerbic humor remained intact. He spent the first segment belittling Mr. T for signing up with the farce that was the WWF. Again, this would be unlikely to offend a guest in 2014, but in 1985 it must have felt like high treason.

When Belzer mentions the violence in which Mr. T will play a part, Mr. T immediately goes on defense.

“The most violent show on TV is the six o’clock news,” he says, and then immediately undermines himself. When Belzer says, “I was particularly addressing the specific match which you’re going to make huge sums of money on,” Mr. T answers that he and Hogan “might be doin’ it just because we just like violence.”

Belzer asks Hogan about the “vendetta” they have against “Rowdy” Roddy Piper and “Mr. Wonderful” Paul Orndorff, whom they’ll be facing at WrestleMania. “I guess you call it a vendetta. I call it bad feelings,” Hogan says, before breaking out some scripture from the gospel of Terry, the part right after “say your prayers” and “take your vitamins”: “Do unto others before they do unto you.” Hogan’s beatitude would prove somewhat ominous.

After verbally jabbing them for several minutes, Belzer decides to go full Kaufman, asking to see some moves. Mr. T, still ornery, declines. “We ain’t showin’ you nothing,” he says. “You want to see some moves, you get a closed-circuit ticket,” referring to the WWF’s method of selling the broadcast for fans who couldn’t attend WrestleMania in person. But Hogan has other ideas. He leans over to his partner and whispers loudly enough for Belzer (and a latter-day YouTube viewer) to hear: “I wanna make him squeal.”

When they get on center stage, Belzer asks for a camel clutch, and then for Hogan’s signature move, whatever it is, but the champ demurs. “I’m gonna stick to the basics because the floor’s a little hard there and I don’t wanna get you hurt.” One gulps at the unintentional signaling.

He then proceeds to put a game Belzer into a front headlock — known mostly today as a guillotine choke in MMA, but which Hogan calls a sleeper hold — and cinches it in. “You just tell me, brother, when you want him to quit screaming,” he says to Mr. T. Hogan vamps for the crowd, narrating the technical aspects of the assumedly nonlethal hold. Belzer’s arms go limp, but Hogan doesn’t notice. When he releases Belzer a few seconds later, much to the surprise of the Hulkster and everybody in the audience, Belzer flops onto the floor, his body totally lifeless. His head hits last, smacking the aforementioned hard floor audibly. “He’s all right,” says Mr. T, still sitting sullenly on the couch 15 feet away. “He’s just sleepin’.”

As the Times wrote about Belzer’s Cinemax show: “There is a nervous unpredictability about the Belzer act. He himself seems to be never quite sure what he will pounce on next. The result can be unsettling but fascinating and sometimes very funny.”

The crowd is unsure whether they’re watching something real or staged. As the reality sets in, the gasps come in waves. Finally, Belzer wakes up, and Hogan gamely slaps his cheeks and yanks him to his feet. As Belzer lifts his head, you can see a puddle of blood on the floor. Belzer looks like, well, like a man who’s suffered head trauma. Half-elated, half-confused, he smiles at the camera and goes to break: “And now, we’ll be right back after this word from you know who!” It’s unclear if he knows he’s saving the show or if he thinks he’s a game show host from 1955. Hogan walks Belzer toward the back, blood trickling onto his shirt collar. As they go to commercial, the camera lingers on Mr. T as the studio lights dim.

When we return from break, Leopold is there, pinch hitting as host because Belzer, he explains, was hurt in the last segment. “It was an accident,” Leopold says. “Hulk didn’t mean to do it. These things happen on television. And now I think Hulk and T should just talk about this kind of thing, how it can happen and how to avoid it.”

Hogan looks defeated as he goes into full apology mode: “I feel really bad about the situation. Richard asked me to demonstrate a professional wrestling hold. I put what’s called a front chinlock on the man and when I released it he fell and hit his head on the floor. It’s a situation where you need to be a professional at all times and the type of move, when I would put that on a professional wrestler, I would apply probably 10 times as much pressure. I didn’t realize that apparently he doesn’t do any physical training at all.” There are stray guffaws from the crowd. “I’m not saying that in a smart way. I really apologize. Usually something like that I could put on Mr. T and there would be no problem at all.” But Belzer didn’t even warn him that he was hurting, he insists, so how could he have known? “It’s a situation where I’d just like to warn people, if you’re not a professional athlete or you’re not a professional wrestler, don’t try to copy what you see the athletes or professional wrestlers do on TV.”

Then Mr. T jumps in, several degrees less contrary than before, but nonetheless counterproductive: “This man is the champion of the world at wresting. I don’t know if you seen the piece a while back on 20/20 where the reporter asked one of the wrestlers was wrestling fake or for real, so the wrestler slapped the interviewer twice upside the head. The guy wanted to know was it fake or for real. I think he found out it’s for real.”

After reeling off his WrestleMania training regimen and his physical bona fides, Mr. T reiterates: “There’s too many people going around saying, ‘Hey, I think it’s phony.'” He gestures at Hogan, who seems almost physically ill at this point: “He didn’t get to be the heavyweight champion of the world at wrestling by playing.”

Leopold seemingly feels obligated to twist the knife just a bit. “There was a little sign between the two of you like we’re going to teach him a lesson or something like that.”

“It wasn’t my idea to do this show, man,” said Mr. T. “I didn’t want to be doin’ interviews. We should be in training right now.”

The Hulkster chimes in: “They told us there were 50 crippled kids in wheelchairs. That’s why we’re here today.” How could he have said no to the kids? Or to Belzer for that matter? “I just showed him the simplest hold I knew.”

“Let’s take a commercial and when we get back we’ll try to figure out what we’re doing,” says Leopold.

While they were figuring it out, Belzer was on his way to the hospital, where he got stitches in the back of his head. The next night, Mr. T was on the Late Show With David Letterman, and he brought up the incident even though it was clearly verboten.

“One of these days it’s gonna take one of you host guys to get hurt for you to realize wrestling is serious,” Mr. T said to Letterman. “Let me tell you about the guy who got hurt last night.”

“No, we’re not going to talk about the guy—”

“So Hulk put him in a wrestling hold. He’s in the hospital probably today.”

As Bruce Newman put it in his April 1985 Sports Illustrated cover story about Hogan and the WWF, “The Hulk put [Belzer] in a front chinlock, whereupon Belzer was rendered null and void, almost permanently. Belzer slumped to the floor unconscious, waking up moments later in a pool of his own blood. Belzer, who received eight stitches on his head, called the incident ‘vicious and sickening,’ then placed a full-page ad in the New York Post announcing it would be replayed five nights later, just in case anybody hadn’t been sufficiently grossed out the first time.”

On that next episode, Belzer ruefully replayed the clip, “just to show that I am not a part of their promotional tool and it was real.” There was understandable confusion, due to the nature of the guests. “I saw Bill Cosby today,” he says, arguing from authority, “and he thought it was a hoax.” He turned his back to the camera and showed off his stitches to drive the point home.

“Should Belzer be thinking about suing,” wrote Newman, finding the same reference that Mr. T did, “he might have company in 20/20 reporter John Stossel, who claims to have suffered pain and ringing in his ears as the result of David (Dr. D) Davis’s boxing his ears during an interview in December.”

Belzer did sue Hogan, for $5 million, and reportedly received $400,000 in an out-of-court settlement. “[My wife and I] put a down payment on a house in France,” Belzer told Vulture while promoting a novel he wrote in which the real life Richard Belzer, character actor from Law & Order: SVU, is called into action to solve the mystery of a missing friend. “It’s a cool idea,” Howard Stern said when Belzer appeared on Stern’s show. “You are the star of the book.”